New Blitz Kids Video (‘On My Own’) 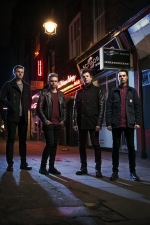 Blitz Kids have released their new video for ‘On My Own’ and can be viewed by clicking read more.

Blitz Kids are currently on tour with Lower Than Atlantis and will be playing Slam Dunk Festival and Download Festival later this summer.