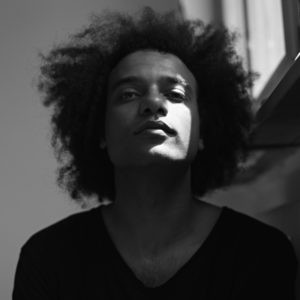 Without a doubt, one of this year’s most unique acts came in the form of Zeal & Ardor, the once-solo project of Swiss/American musician Manuel Gagneux turned fully-formed band. Blurring the lines between black metal, blues rock and elements of soul, this year saw the release of their sophomore album ‘Stranger Fruit’. It was a critical success that saw Gagneux further his concept of a re-imagined history with a ritualistic, surreal edge. They’ve been touring in support of it all year, and the European leg saw them bring their carnage to Brighton’s The Haunt.

Tonight they are preceded by post-rockers Blanket (4/5), a distinctly more ambient group when compared to Zeal & Ardor’s pummelling metal sounds. Backed by two widescreen tv’s playing enigmatic visuals, the quartet look electric as they play through tunes, bringing tracks from this year’s excellent ‘How To Let Go’ to life. The room’s still fairly empty throughout their set, but they still perform with as much energy and enthusiasm as highlights such as ‘The Devil Holds Fast Your Eyelids’ truly deserve.

In a foggy wave of psychedelic purple and red lights, Zeal & Ardor (4.5/5) take to the stage of the sold-out venue with Gagneux out front and centre, with backup singers on each side, all dressed in black and looking as menacing as the music they’re performing. While each member of the group performs impressively, the bandleader is by far the most important element of the performance. From Gagneux’s aggressive shredding to his snarling vocal delivery, he’s a powerful figure in the mist.

The Haunt’s sound setup leaves a lot to be desired when it comes to heavy guitar tones, and Zeal & Ardor’s black metal oriented tracks suffer the most from this. ‘Servants’, ‘Waste’ and ‘Don’t You Dare’ lack the punch of the recorded version, but it’s not enough of an issue to stop the crowds from banging their heads erratically to the blast-beat heavy metal passages. Gagneux’s reverb dripping screams sound superb, his two-mic setup allowing him to jump between scowling gutturals and clean, delta-blues style singing.

Those clean vocals dominate the energy of the room. From ‘Row Row’ and its almost nursery-rhyme cadence to ‘Gravedigger’s Chant’s ominous and morbid tone, the trio of vocalists are powerful messengers of soulful darkness. The former track is one of the best moments of the night, with nigh-on every voice screaming along and going wild for the sudden shifts in sound.

An hour and a half set closes out with some of their biggest hits to date, including the charming ‘Devil Is Fine’ and the bombastic fan favourite ‘Baphomet’. They feel like fitting closers, a call back to the album that propelled them to where they are, while the wild chanting of “Right hand up, left hand down” has the crowds making the same hand signs and dancing along. It’s a solid reminder that Zeal & Ardor have managed to balance their mix of genres impeccably, and the incredible response to their electric stage show speaks to just how fast this band have honed their music into a live experience.