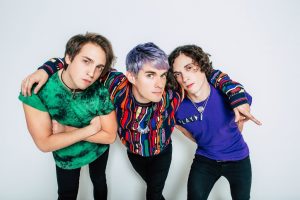 If you can believe it, it’s only been a year since Waterparks’ first headline tour. In all their years of playing tiny clubs and supporting scene giants, they’ve managed to get pretty good. But, this is Waterparks we’re talking about, Houston’s premiere pop-punk (but-not-pop-punk) outfit; they were never meant to play under anyone else’s shadow.

Along the setting of the Brighton seafront, Waterparks set out to prove they know how to captivate a live audience, on The UK leg of the ‘Entertainment’ tour. As the night begins, any lethargy in the crowd from waiting in the cold melts away as Dead! come on stage. The four-piece present themselves as the best of true British alt-rock, with an electrifying performance. The band pack in their brand of punk sensibilities and raw rock n’ roll, with great results. The show falls somewhere between metal and rap which a charisma that wins over some new fans in the audience. (3/5)

Patent Pending follow to give pretty much everything you’d want from a support band. Along with pure pop-punk, there is a cover of Cascada’s ‘Everytime We Touch’, crowd swimming, sass, and so much energy, you could bottle it and sell the excess to supports act that could learn a thing or two from them. The group seem to have formed a bond with Waterparks over the tour, as both bands invade each other sets, reminiscent of frat boys sulking over to each other’s dorms. It’s moments like this that give an insight into the carefree lifestyle a Waterparks concert embodies. (4.5/5)

It’s not long between sets before the “Gloom Boys” themselves come on stage. Opening with an early hat-trick of songs from ‘Entertainment’, the trio bounce with energy as ’11:11’, ‘Blonde’ and ‘Peach (Lobotomy)’ seamlessly translate to the live setting.

Though the feverish crowd respond well to these high-octane numbers, yet when the band do cut away from the set to address the crowd, one of the first things frontman Awsten Knight does is accuse the room of being “quiet as fuck”. The crowd seem to take offence at this and go about proving themselves during ‘Crave’. Within no time at all, the audience comes alive with singalongs and circle pits and there’s no evidence of the crowd being timid as Knight rather dramatically jumps into the crowd.

For the remainder of their set, Waterparks effortlessly go from bittersweet ballads (‘We Need To Talk’), to straight-up pop bangers (‘Take Her To The Moon’) to stripped back singalongs (‘Lucky People’). Throw in a mix of sassy pop and straight-up rock, and you’re left with a band who has the crowd in the palm of their hand.

As for the two encore songs, they go for the rather unconventional ‘Crybaby’ and without a moment to breathe, close out with ‘TANTRUM’. While Waterparks had been thoroughly energetic all night, they take it a step further here, working the crowd up into a frenzy before simply departing. More than at any point in the concert, these two songs, tinged with such extreme emotion, prove the surprising depth the three-piece can have live.

Its obvious Waterparks are in their element when they get the chance to construct their own little world during a concert. It feels insane they were ever forced to condense all this energy and charm into a 30-minute support slot, but make no mistake, no one will be mistaking them for a support act again. (4/5)