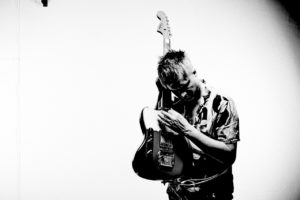 After the 2011 demise of Manchester-based Oceansize, Mike Vennart set out solo with the project known as Vennart.  September saw the release of new record ‘To Cure a Blizzard Upon a Plastic Sea’ to much acclaim. After a short tour, this is the homecoming show. Sold out, the Deaf Institute’s wooden floor is straining under the weight of the bodies pressed into the space. A tense atmosphere lingers.

As Pijn (4/5) take to the stage the tension ratchets up a notch. With their debut record ‘Loss’ barely a month old, they’re keen to make a big impression. Within moments, they have. The six-piece band (drums, bass, guitar, cello, violin and slide guitar) all appear to be doing their own thing, yet it perfectly sets the scene. Imagine a horror film set in the marshes during a damp autumn, an anguished figure walking in the distance, these mournful strings and distressing guitar chords could be the soundtrack.  A smoke machine shrouds the band in a miasma, adding to the eerie feel. Then everything comes together.  A wall of post-metal, rolls across the audience, augmented by the groaning and sighing strings. At times the music becomes so heavy the wooden floor feels to sag. It’s never anything but arresting. Playing for an unbroken 30 minutes, Pijn astounds throughout.

Bringing Pijn along for the ride was a genius move. Vennart’s (4/5) work contrasts marvellously while clearly belonging in the same genre. With the bar set so high, they really have to pull off a coup to come anywhere close. They do. Creating songs from swirls of guitar effects and huge scuzzy basslines, the four-piece are brighter but no less atmospheric and simply marvellous to watch. So many effects pedals clutter the stage, it’s surprising the band even fit. Yet it’s not overkill, every sound has its place. The guitar tones are superb and when they break out the big riffs, oh boy, does it sound powerful.

Cuts from their first album, ‘The Demon Joke’ are dotted throughout a set heavy on new material, but it doesn’t seem to matter, the crowd are loving it. ‘Operator’ comes across as the most massive pop song, which is a surprise, considering the songs it sits between.

Mike Vennart himself is wonderfully assured. Wearing a silk shirt that telegraphs his laid-back style he dances throughout the set, his long legs tapping delicately amongst his pedalboard, clearly having real fun. Dean Pearson also deserves a special mention. He’s a ferocious drummer and his massively powerful style keeps everything moving. On the slower numbers, he easily holds the crowd’s attention by himself.

The transient set flows and never settles. Nothing feels repeated and you’re surprised again and again by right-angled switches in tone and approach. ‘Robots in Disguise’ and ‘That’s Not Entertainment’ receive the biggest fanfare, it’s delightful to hear these songs presented like classics. Finally, two Oceansize songs close the set. It’s what the fans want and the cheers are the biggest, but it’s a shame because Vennart’s own material offers just as much.