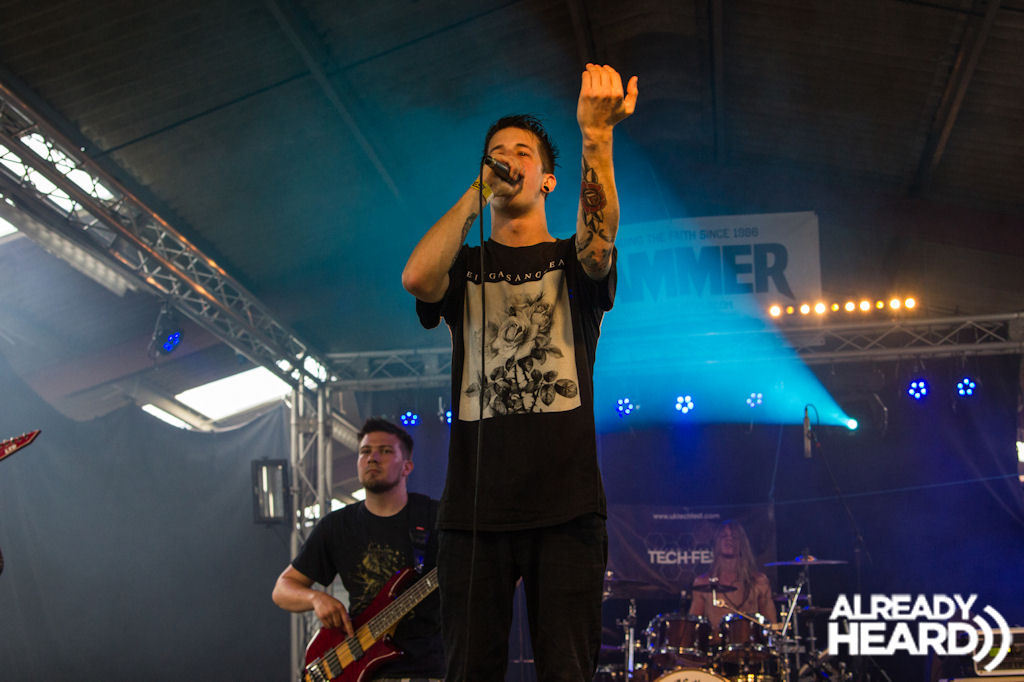 For the risers of the fourth and final day of UK Tech Fest 2014, they’re welcomed by the overly abrasive Doomed From Day One; perhaps one of the most death metal band names we’ve heard in quite some time. Nonetheless the Guildford band draw a strong, mostly hungover crowd which take in DFDO’s dominating mix of scaling riffs, pummelling drums and deathly screams. Add to that some funky groove-centric guitar moments along with some brutal breakdowns, and DFDO provide a frantic opening to the day. (3/5) 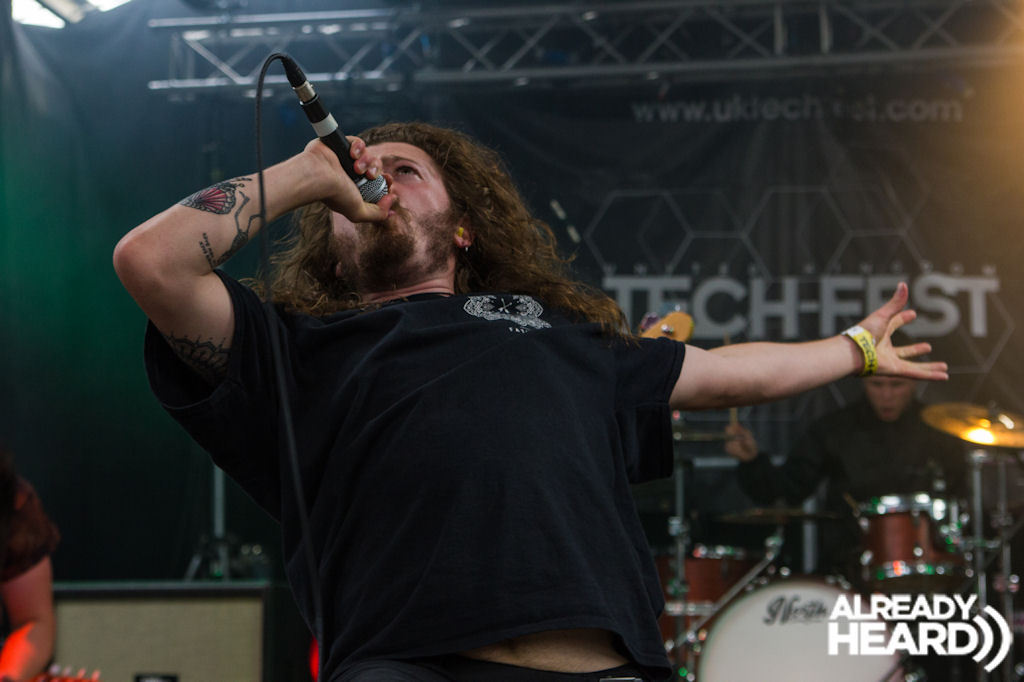 Next up is Shields from London who bring a rip-roaring set filled with subtle ambient elements and soaring guitars. The duel vocals of screamer Joe Edwards and clean vocalist Sam Kubrick isn’t as effective at first but that soon changes whilst guitarist Jamie-Lee Underwood supply a mix of powerful riffs and soothing lines. Whereas drummer Alex Rayner dominates at time with beastly pounding and patterns. However, we left with the impression that Shields aren’t entirely original and their set is quickly forgotten about (2.5/5) 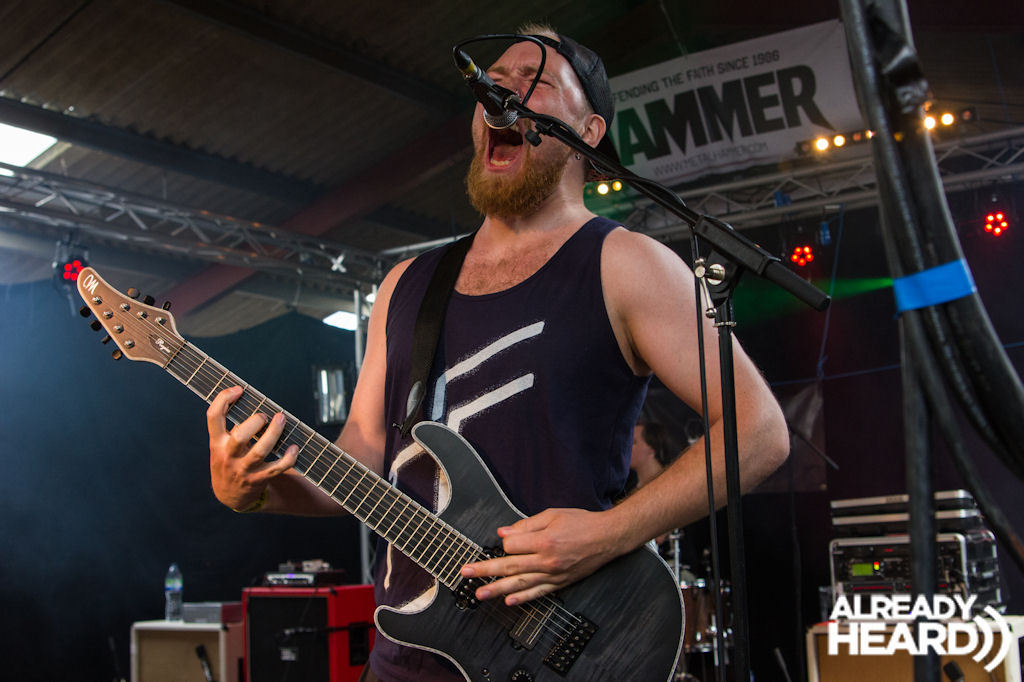 Norweigan metallers Kodeks give a strong showing. Led by moustachioed Aleksander Emilsen, the four-piece give a dense set with spiralling riffs yet Emilsen’s vocals struggle at time and Jonas Magerøy’s drum work is messy. With the majority of the Tech Fest elsewhere and those in attendance mostly uninterested, Kodeks go through the motions with little to no effect. (2/5) 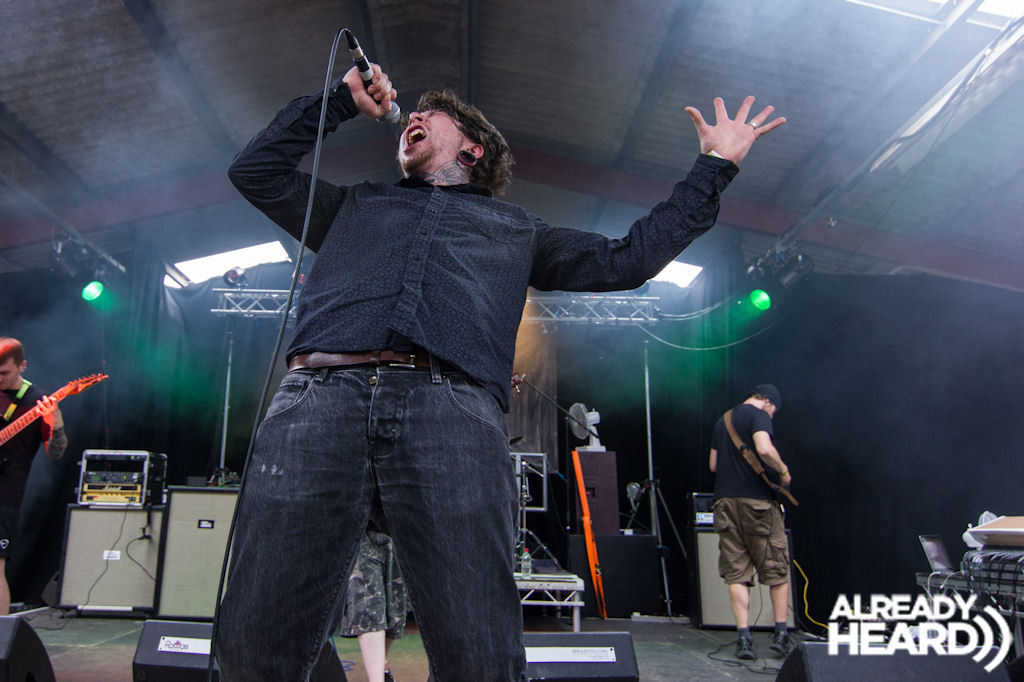 Things pick up for Aeolist on the main stage as the Norwich band draw in a large crowd as guitarists Billy Phillips and Tom Ferguson showcase twirling solos alongside pounding drums. Later on the band’s atmospheric elements come into play and prove to be more compelling as the slow burning build pays off with a tremendous effect. Overall, their set was technically satisfying and shined through pass the stereotypical heaviness parts of their set showed. (3.5/5) 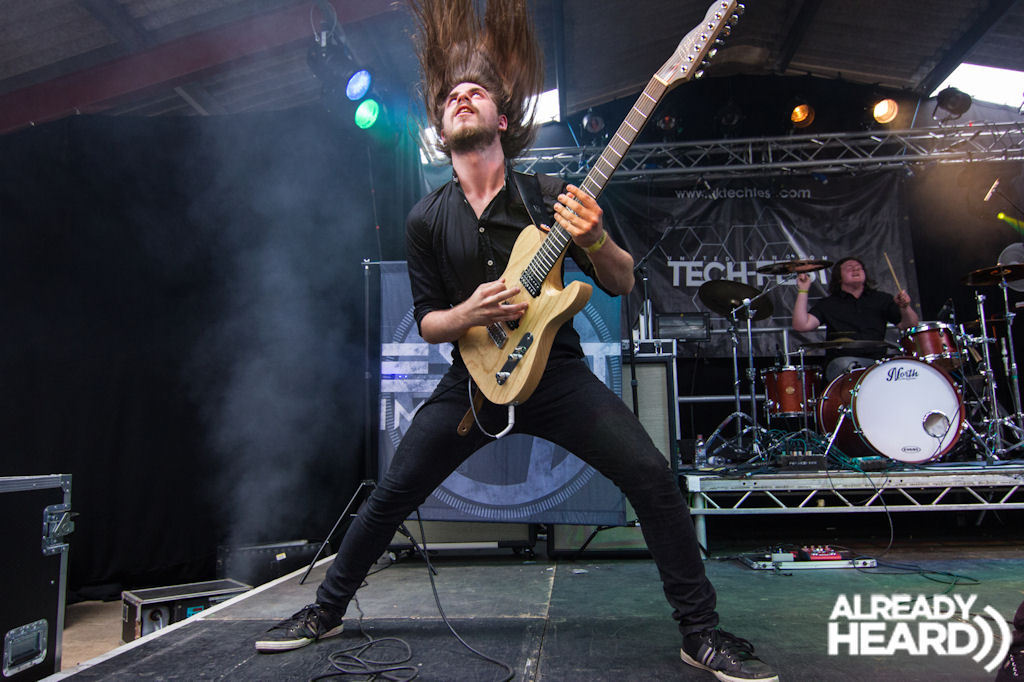 Londoners Exist Immortal follow up the release of their ‘Darkness Of An Age’ with a stellar showing. Vocalist Meyrick de la Fuente has the ability to stand out against the duel guitar virtuoso pairing of Tom Montgomery and Kurt Valencia. With biting aggressive vocals and crescendoing softer moments, the quintet provide a commanding performance that has energy and urgency. Whilst bassist David Billote doesn’t get left out with a plucky display. On the whole Exist Immortal are one of the stand out bands today. They’re Tech Fest “veterans” and today justify why they keep on coming back; a impactful display for a band who are on their way to great things. (4.5/5) 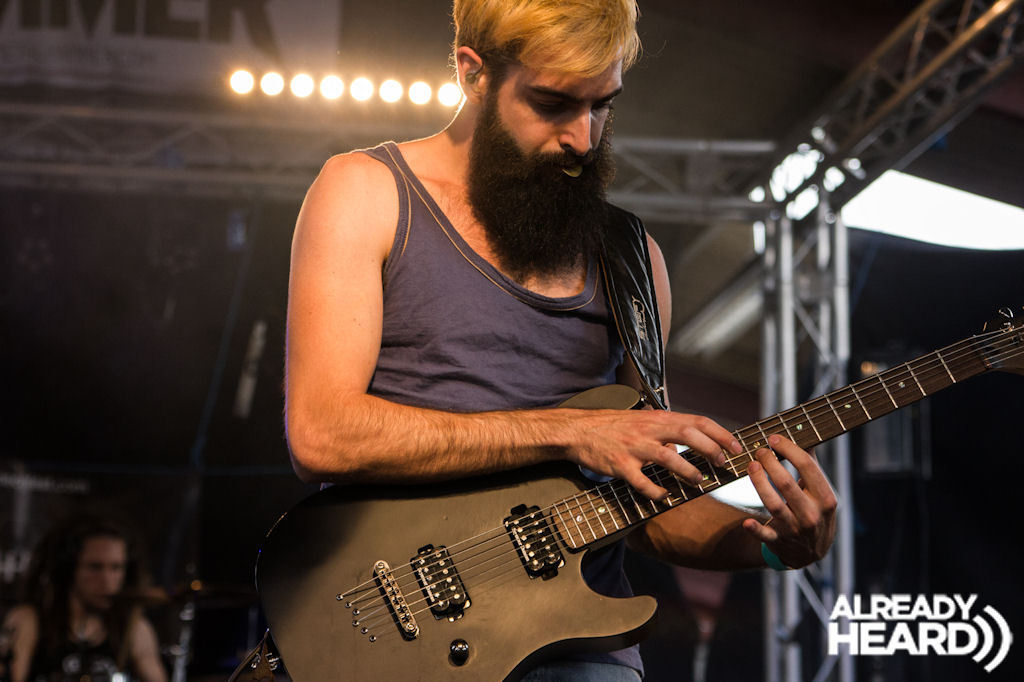 Back on the second stage we have prog metal Milan five-piece Destrage. With a thriving opening that doesn’t let up for the next 30 minutes, Paolo Colavolpe’s has a raw presence that compliments the insane, frenzied riffs of Matteo Di Gioia and Ralph Salati and the band’s overall underlying groove. Destrage have a sharp, unstoppable energy which is pulled off well with their dynamic shift is style and tempo. (3.5/5) 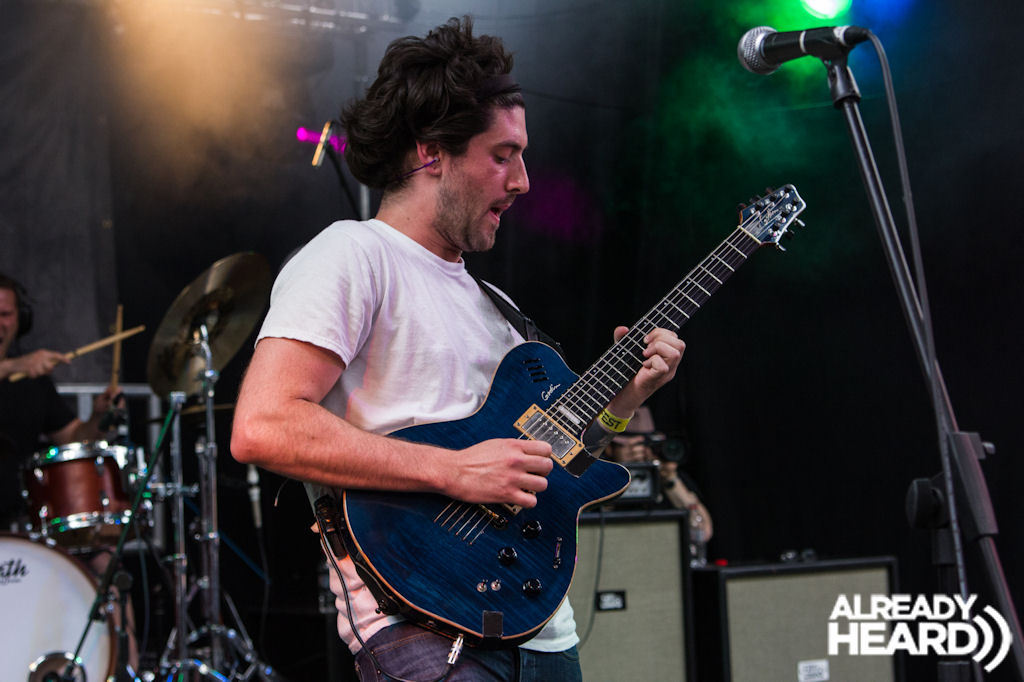 Next up is Alaya and with them they bring a soaring display consisting of superb melodies and intriguing guitars. Vocalist Evan Dunn leads with a decent performance, but it’s his twisting riffs that truly shine. The trio’s hard rock, melodic style mixed with their tight musicianship is warmly appreciated. Alaya have vibrancy and turn out to be very impressive. A superb UK debut from the Chicago trio. (4/5) 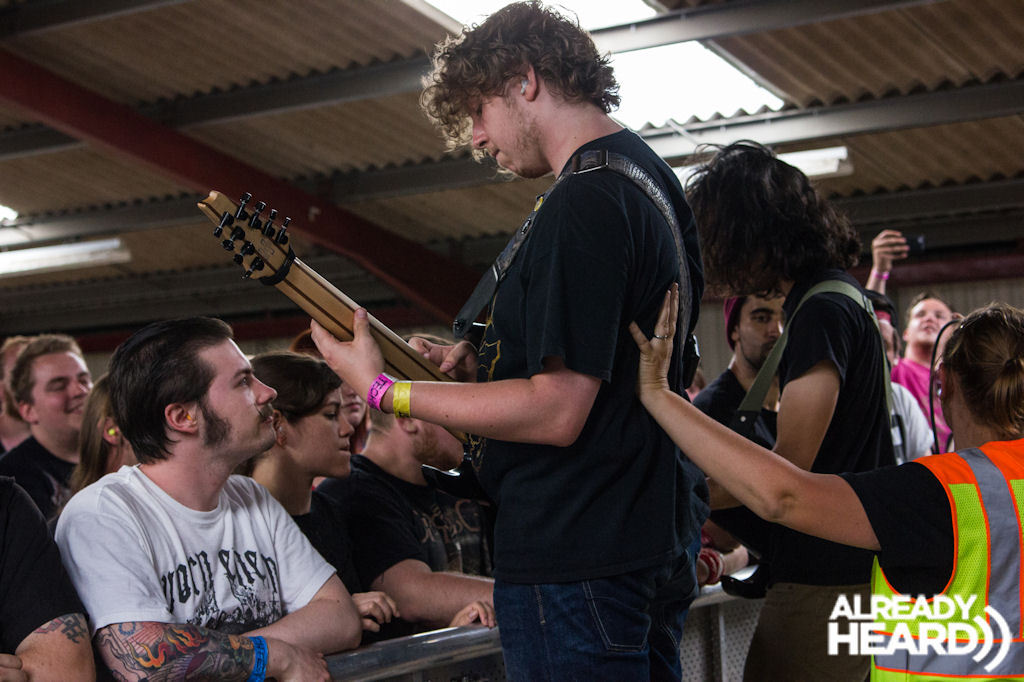 After a quick break and brief chat to The Safety Fire, a visit to the second stage sees Friend For A Foe producing a powerful, melodic display. With twisting riffs and earth shattering drums, FFAF are dynamic; energetic with an absorbing style that wins the sparse crowd over. Whilst the 3 guest vocalists shake up the set, it does not distract from the band’s technical prowess, their downfall is a style that doesn’t stand out from the ordinary. (2.5/5) 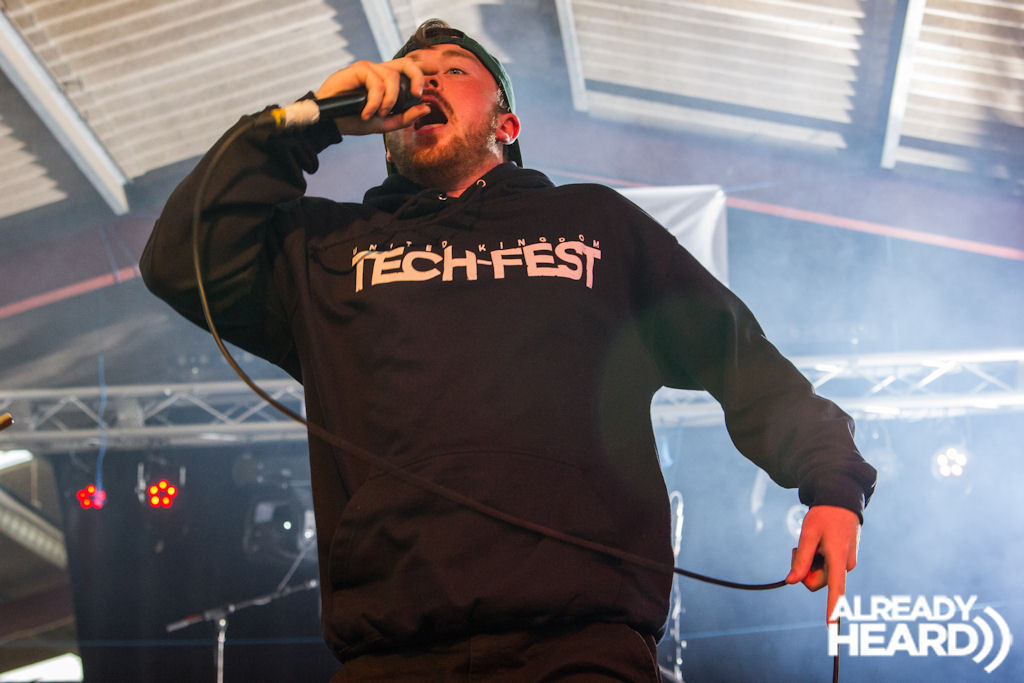 Rounding off the second stage is Aliases who pull in a huge crowd. The Manchester group have an energetic show that is dominated by the powerful lungs of Joe Rosser, and insanely incredible guitar work of Leah and Pin. With duel finger tapping, erratic drumming and a groove-ridden bassline, Aliases are so overwhelming that it’s difficult to draw yourself away from. It may have taken them a while to finally make their Tech Fest debut, but it was certainly worth the wait. We’ll be keeping an ear out for their debut album. (4.5/5) 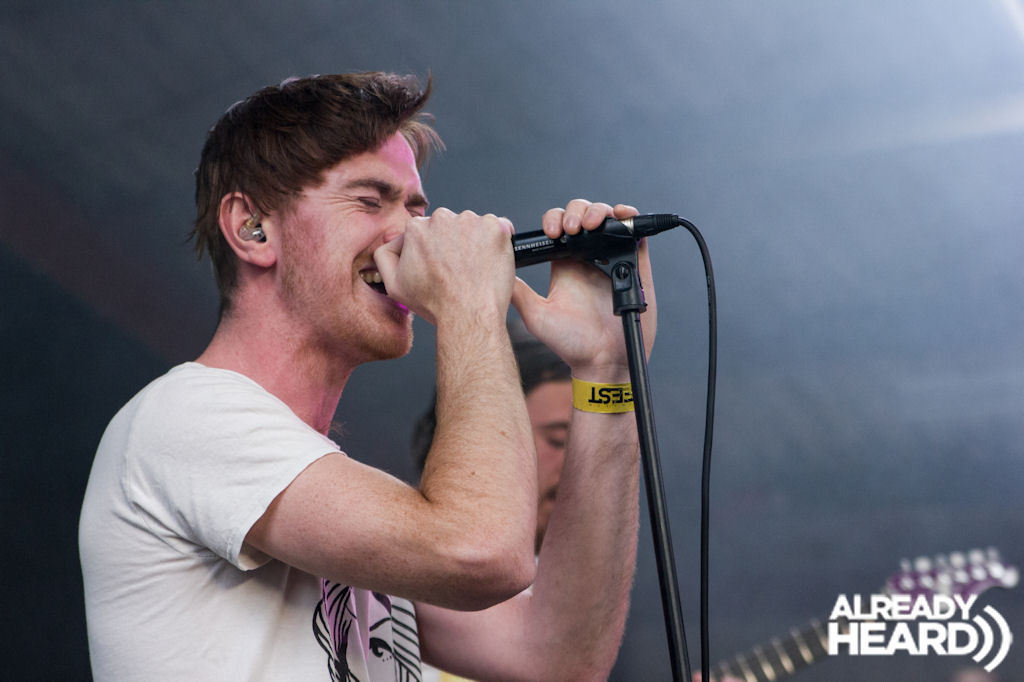 One week removed from playing Sonisphere, The Safety Fire make their Tech Fest debut with startling results. Showcasing cuts from last years ‘Mouth of Swords’, the quintet bring a harmonious, bass-heavy set that leaves the crowd captivated. Frontman Sean McWeeney showcases variety from the higher notes to the harsher moments, yet it’s guitarists Joe Ardiles and Dez Nagle which, to an extent, steal the show. However as a collective, TSF are overwhelming and dynamic with ’ ‘Huge Hammers’ receiving an ecstatic reaction. Whilst later on, the band’s rapid fire guitars lead into the concluding ‘The Ghosts That Wait For Spring’, with razor sharp riffs and raw vocals ending TSF’s set on an almighty high. (4.5/5)

Sub headliners The Ocean blend their mix of atmospheric elements with powerful surging tech metal, that wins many over. Paul Seidel’s drum work is thunderous whilst guitarist and bassist have the technique to match. Whereas vocalist Loïc Rossetti is raw and thorough.

As the band settle into their stride, their slow burning numbers are compelling with an explosive conclusion. The build up leaves the crowd on tender hooks as they wait the pay off and has them hanging on to every word.

For someone who was unfamiliar with The Ocean, I was left completely floored by their impactful and solid performance. A beastly set that was pulled off with precision. (4.5/5) 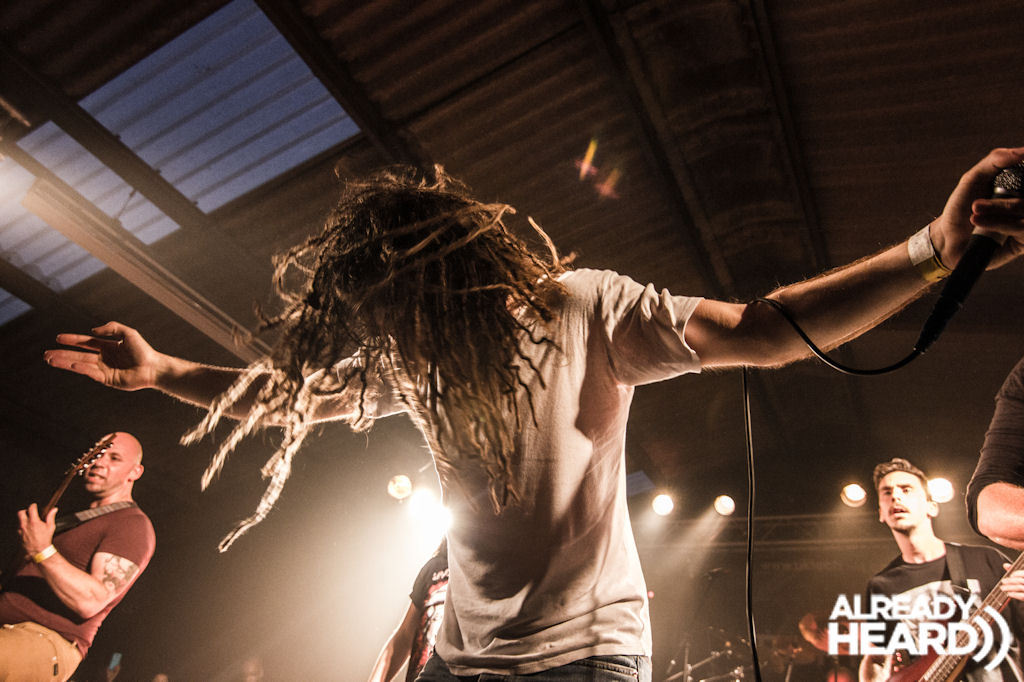 A cliché as it may sound but it’s not everyday a tech metal band as influential as Sikth play Newark. Having made their return at Download last month, and a full UK tour planned before the end of the year, tonight’s showing is in someways unique; an intimate festival with a crowd that fully appreciates the Watford band.

Welcomed by a “we want Sikth” chant, and appearing later than expected, they are worth the wait. Sikth are as chaotic as ever and don’t miss a mark after 6 years away. With the majority of their set coming from their 2003 debut LP, ‘The Trees Are Dead & Dried Out Wait for Something Wild’, tracks such as ‘Scent of the Obscene’ and ‘Pussyfoot’ send the crowd into a mental frenzy. Whilst Mikee Goodman leads the crowd in a brief take of ‘When Will the Forest Speak…’.

Despite lack of an encore and the late start, the return of Sikth was very much welcomed by all, and tonight marked their comeback in an underground scene that is truly thankful for all they have accomplished. (4/5) 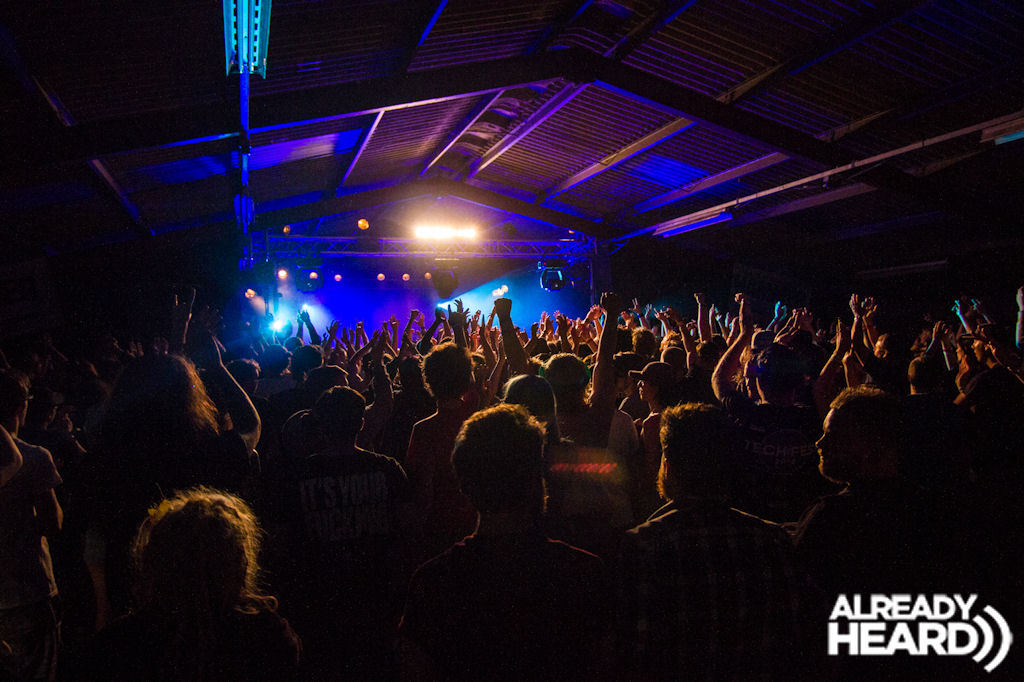 As Sikth leave the hungry crowd wanting more, it’s great to see the spirited crowd chant the name of not the band but of Tech Fest itself. Whilst it’s an area of music that is mostly ignored by the masses, this weekend shows it is a tight-knit community that is bounded together by a love and admiration of stunning musicianship that leaves neutrals, like me, starved for more.