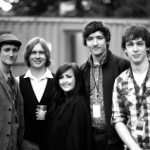 Sitting in the bar, I see the room gradually fill, and for a night as bitterly cold as tonight, I’m impressed by how many have braved it out. Street Spirit is a relatively new night, every Wednesday, for talent from Huddersfield and the surrounding areas, and tonight is no exception.

On later than scheduled, The McQues don’t hesitate in jumping straight into it, bombarding the audience with their fresh take on the closest genre that I can call them, indie. You can hear strong influences, but personally the only one I can pick out is a less mainstream Kings of Leon, although that connection is very loose. Their music has the certain groove that gets the crowd nodding, moving, and listening with ease.

The vocals are mainly taken by the bassist, commanding the frontman presence without seeming to try, although the band is definitely a united front. Harmonies a-plenty, working beautifully within the weird time signatures. The skill of the drummer is what stands out most, holding the beat, showing true skill whilst doing nothing to take away from the music. ‘Bahama Breeze’ is a standout song, great chorus, and great song throughout. You can tell these guys are having fun. (3.5/5)

Next on are Byron Street Social, a band I’ve heard a lot of good things about, and had my expectations high from the start. With a nice twist on reggae, but almost to the point that you wouldn’t call it ‘reggae’, they start off with a song that has the best use of a melodica I have ever seen. I thought they were a novelty! Great combination of rapping, and singing taken by both vocalists, there is nothing you can’t like about this band. The saxophone works great, and isn’t in your face, working perfectly for the performance. The covers in the middle of the set, DJ Fresh’s ‘Gold Dust’ and ‘Louder’ don’t even sound like covers and are amazing versions by the band; flawless. Ending with the song ‘Listen Up’, the crowd loves these guys, and its hard not to see why. (4/5)

I’ve wanted to see The Rag-Tags for a while now, having heard lots of good things about them. Having supported Mumford And Sons earlier this year (Mumford And Sons!), it’s obvious from the start how they got the opportunity. Taking to the stage with cheers and whistles from the crowd, its clear they have quite a fanbase. A refreshing approach to folk music (which seems to be everywhere at the moment) The Rag-Tags have everything their music needs.

A violin is rarely seen in live music, from what I’ve seen, and works perfectly whilst Lottie, the lead singer, holds the stage with ease. With harmonies taken by all other members, the band has a rich, big sound. Sam’s drumming compliments the music perfectly, while taking harmonies, which really bring the sound up. ‘4, 5, 6’ is an obvious crowd favourite and as the set continues, the crowd get more in to it; stamping their feet along to the music and creating a really powerful atmosphere. The set closes with a new song, ‘Promise’ which includes a crowd singalong to bring the song to a big finish, showing their true prowess as musicians and songwriters. Great folk music, great band, the only thing that seems to be missing are beards.

A night of great bands, and great performances. Majorly impressed by the talent from Huddersfield and the surrounding areas. (4/5)