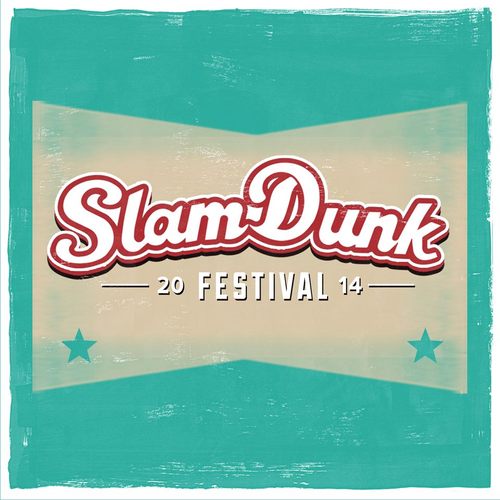 Apparently the weather failed to get the memo that its basically the law that Slam Dunk Saturday is supposed to be bathed in glorious sunshine, instead lashing it down with rain for the entire time the expectant masses waited patiently in line. Despite the decidedly soggy nature of pretty much everyone on the Leeds Uni site by the time they got inside little had been done to dampen the enthusiasm for Slam Dunk North. Also known as the original and best day, despite what you Southern and Midland types may say.

Proceedings got underway in earnest with the appropriately named The First, whose performance on The Cheer Up Clothing Stage had attracted a more then respectable crowd for so early in the day. Between the rather cosy nature of the room and the Cambridgeshire lads determined attack getting everyone moving, warmth and dryness was quickly restored and the band’s take on melodic rock with heavier edges was quick to win over a visibly appreciative crowd. (3/5) 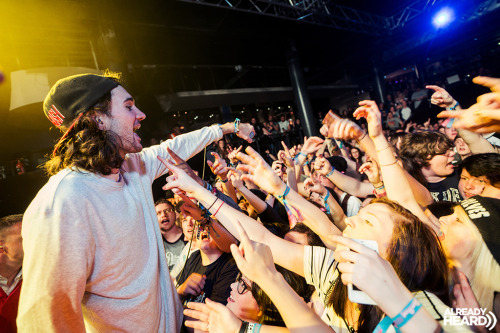 Decade’s performance on the Macbeth stage may well prove to be a landmark moment in the band’s still relatively young careers. Alex Sears, Joe Marriner and co were noticeably in awe of the sheer size of the crowd that had packed itself into the room and the grins only spread wider as said massive crowd proceeded to roar every single lyric back at them. The belief and love for the band being shown by every single person in the room served only to spur the lads from Bristol to new heights, who duly smashed their best performance to date effortlessly out of the ball park. Singles ‘British Weather’ and ‘Brain Freeze’ both received stellar airings that were rapturously received, and perfectly showcased Decade’s grunge tinged pop-punk sound. (4/5)

In his position as the only artist to have consistently played Slam Dunk year after year, Berkley, CA’s MC Lars has built himself a die-hard Slam Dunk fan base. And they were out in force to party with the master of lit-hop at the Uprawr stage. Lars made up for the lack of space on the stage itself by bouncing precariously but joyfully on the front of stage monitors for the entirety of his back catalogue spanning set. Highlights included Lars being joined on stage by a comical Raven puppet during old favourite ‘Mr Raven’ before skanking bodies filled the tiny onstage space, leaving Lars to ecstatically crowdsurf around the room during a highly enjoyable set closing performance of ‘This Gigantic Robot Kills’. (4/5)

There are very few bands in the world that can lay claim to having even half as fun a live show as Californian pop-punk meets hip-hop heroes Zebrahead. In a room so busy you were lucky to be able to properly see the stage, Matty Lewis and Ali Tabatabaee’s undeniable chemistry and sophomoric banter kept the hilarity flowing throughout. While the sight of the band’s ‘German’ on stage guests chugging bear in lederhosen provided one of the days stranger spectacles, hits like ‘Anthem’, ‘Postcards From Hell’ and ‘Hello Tomorrow’ saw wall to wall bouncing and dancing. (4.5/5)

Folk-punk troubadour and master of the full set sing-along, Rob Lynch, gave Slam Dunk North’s most feel good set. In a set filled with a mixture of old favourites and previews of songs from his upcoming debut album, every song met with rabid and fierce approval and even featured a enthusiastically constructed if short lived human pyramid during ‘My Friends and I’. Lynch is a hugely charismatic and engaging performer that has long been a firm favourite to those in the know, easily keeping his adoring public entertained between songs with his easy going laid back sense of humour. At one point, Lynch starts an impromptu rendition of a Motion City Soundtrack song that he can’t remember the name of, as he jokingly complains about the timing of his set stopping him from to see a variety of bands he likes. Expect to see Rob Lynch playing much bigger stages then this when his long awaited debut album finally drops in the autumn. (5/5)

Hopes of checking out the hotly tipped Real Friends are quickly and bluntly dashed by the unfortunate combination of a huge crowd and a stupidly narrow doorway into the Atticus. Instead its back to the acoustic stage to witness the long overdue return of Ben Liebsch, better known as You, Me and Everyone We Know. Given that it is several years since Lisbech has even played a show, it’s understandable that things get off to a nervous and slightly shaky start. However, with an enthusiastic and boisterous, if slightly inebriated, room urging him on Liebsch’s confidence quickly grows and within a few songs he hits his stride like he has never been away. Liebsch’s vocals are as superb as they have ever been, and his acoustic take on the unflinching, cuttingly lyrical upbeat power-pop which has always been YM&EWK’s trademark provides an ideal tonic to the time of the evening when energy levels should have been starting to flag. Almost every song receives a rapturous response, however tracks like ‘The Next Twenty Minutes’ go down particularly well. (4/5)

Hit The Lights are old hands at performing at Slam Dunk with multiple performances already under their belts, and, true to form the Ohio natives hold every person squeezed into the Atticus Stage easily in their sway. Vocalist Nick Thompson and guitarist Omar Zehery casually joke with the crowd and each other at every available opportunity, ensuring that high spirits last throughout the set. Old favourites like ‘Three Oh Nine’ jostle for attention with newer more mature sounding numbers such as ‘Gravity’ in a high tempo album hopping set, before the always show stealing ‘Bodybag’ sets off one last round of on masse pogoing. (4.5/5)

When headliners The All-American Rejects were first announced, it resulted in many a raised eyebrow and some difficult to understand grumbling. The suggestion that AAR are not a big enough act to headline a festival like Slam Dunk is frankly ridiculous. Tyson Ritter and co are one of the biggest pop-rock acts of the last decade or so, and although newest album ‘Kids In The Street’ may not have exactly set the music world on fire, the chance to hear tracks like ‘Swing Swing’ live isn’t one that too many people would pass up. The poise and theatrics of Ritter quickly provide the sense of occasion crucial to a successful headline performance, as he prostrates flails and preens his way through hit after hit from the band’s non too shabby back catalogue. Opener ‘Dirty Little Secret’ instantly hotwires the throngs crammed into the main stage, and it’s quickly apparent that both the crowd and Ritter are in fine voice. ‘I Wanna’, ‘Move Along’, and ‘Swing, Swing’ all sound fantastic, and even ‘Someday’s Gone’ gets a better than expected reaction, despite noticeably less of the crowd knowing the song. On this occasion there are none of the ill-advised or off colour remarks which appear to have marred the Slam Dunk South set, and the Leeds crowd duly hangs on his every word. Slower numbers including ‘It Ends Tonight’, ‘Paperheart’ and an acoustic airing of ‘Mona Lisa’ provide well timed changes of pace and give chance for breath to be caught all round. It’s finally left for an ecstatically received performance of ‘Gives You Hell’ to give the refectory chance for one last outpouring of manic energy before bringing the curtain down on another massively successful Slam Dunk North. With such a hit laden and immaculately, if theatrically, performed set, The Rejects easily silenced their doubters and proved their bona fide headliner credentials. Even if most of the band haven’t aged anywhere near as well as their frontman. (4.5/5)