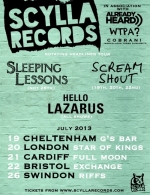 A hot and heavy Saturday night is perhaps not the best time for a gig in many venues, so take an extra movement to appreciate the effort required to do one in a basement when it’s 32 and a beautiful summers night in London. The basement of the Black Heart is empty almost til the first note played with the accumulated crowd enjoying a drink outside, and inevitably things are running late, but the majority of the crowd shuffle down just in time.

First up on tonight’s bill are Bristol’s Hello Lazarus, whose new self titled EP is an accomplished mix of indie beats and soaring riffs. The band are professional and efficient, getting through first band technical hiccups with much ease, if some frustration. Last year’s single ‘X Marks’ really shines here, and the majority of new tracks feel well thought out. This years’ ep ‘Moving Forward In The Next Financial Quarter’ yields the wonderful ‘Get An Axe’which has a riff that rips through the room and some great harmonies on the chorus. The mix of vocals works well and the band sound tight and well rehearsed, but not ultimately engaging, with only a few efforts made of audience interaction. Maybe the heat’s distracting or nerves get the better of them but the crowd responds well enough. Certainly worth a watch. (3.5/5)

Sleeping Lessons come as a bit of a surprise on this lineup but quickly launch into a heavy Glassjaw or Touché Amoré tirade of noise and vocals attacking the thinned out crowd with tracks from last years ‘Cellar Door EP’. It’s engaging and sucks you into their at times ramshackle sounding performance. the music ranges from thrashy through grungy self indulgence to almost poppy punk, It’s actually exhausting to watch. At points the singer and guitarist are both on the floor having tripped over monitors and knocked over mic stands. They seem to be converting those that remain in the basement to watch though. An ill fated cover version of Joy Division is played but a lot of promise is shown. Practice and experience will do these frighteningly young-looking lads some good. (3/5)

There’s a swell of people surging down the steps to the basement for Scream Shout and after a trip to the bar I’m unable to get anywhere near my previous spot due to friends, fans and family members packing out the space. It’s understandable, and the atmosphere feels more family gathering than gig with friends yelling support and in jokes from the moment the band take to their instruments. The sounds are poppy and the band tight as a drum and feeding off the crowd around. Their new album ‘Threads’, gets a good airing out with pop threads weaving in and out of a more grown up indierock sound. ‘Young Bucks’ Has a bit of a stagecoach vibe, and heads bob madly in response to it. ‘Threads’ builds up even bigger down here than it does in the EP, with all the band members all bouncing about. The band are quick to thank everyone for waiting for the five years it took them to get this album done, and engage with the crowd. My favourite track ‘The Hardest Part’ really draws everyone into their circle, with the repeated chorus of “the hardest part is knowing how to make your way there” being repeated all around. There’s obvious passion, and as the heat and impending club night draw the set to a close, it feels like the band got exactly what they wanted tonight. It was worth the wait. (4/5)