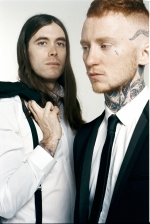 Farewell tour after farewell tour, hiatus after hiatus. We live in a disposable age where everything we love happens in an apocalyptic burst and if you’re not there the first time round you can always catch it on the reunion tour a few years later. But that’s all been said before so, I can’t be bothered to type it up again. Just type “Your Demise farewell tour” into google and you’ll find every side of the argument, but for tonight, it’s Pure Love’s turn to say goodbye to their fans.

The sole support for this evening were canadian born, PUP. Fresh of the back of a headline slot at Live at Leeds and an impressive booking at Groezrock, they were well into their road cycle and it showed tonight in their set. They took very little time in talking to the crowd except to drop the C (not Canada) bomb a few times and drive the band’s name into everyone’s head, which they need not have done as the music itself was enough to do so. The set itself was driven by the band’s (fairly) recent self titled release that took an altogether different shape in the live format. The record is well produced and recorded in itself, but live the band really seemed to really come into their own, the gang vocals seemed all the more present and the music seemed more aggressive somehow. For it to really make sense you have to have heard the record and seen them live, both of which I recommend you do. PUP are definitely ones to watch; their aforementioned impressive bookings and a solid album and live show to back it up mean they won’t be support slots for farewell tours for much longer. (4/5)

My friend once told me that after he saw the Head Automatica video for ‘Graduation Day’, he had to immediately get in his car and drive around listening to ‘Worship and Tribute’ so that he could remember exactly what Glassjaw meant to him and the capabilities of their front man. On one hand, seeing Pure Love was sort of akin to that feeling that my friend had told me about all those years ago, it made me want to listen to ‘Orchestra Of Wolves’ as soon as I got home, which I did (well the next day). On the flip side to this though it also made me wish that I was in fact a Pure Love fan, the dedication that Frank and Co demanded that night was incredible and above all, amongst ‘The Power Of Love’ cover, it looked like a whole lot of fun. I think we sometimes need to remember that this thing called music, however much we protest, does not belong to us. It belongs to the people that make it and if they want to change their direction then who are we to stop them, not that Pure Love would give a fuck if you tried to stop them. So perhaps I prefer a different sound to the band PL became, but I can still appreciate the fact that there was a room full of people who were prepared to start a crowd surfing circle pit, erect a human pyramid on stage and wilfully carry their beloved Frank Carter and Jim Carroll numerous times around the room. All I can say is that they will surely be missed, and as the infamous front man put it, they’ll be back “when the world is ready to pay attention”. (4/5)