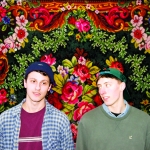 It’s wonderful when you realise that the cream of the underground music scene, are playing down the road from you. Coming in from the cold and going upstairs you come face to face with a treasure load of up and coming bands waiting to please your ears.

Passionately and emotionally gripping, local post hardcore band Elk Blood provide a fitting tribute for the loss of a close friend. Utilising a grand heavy soundscape, the band yell with such raw emotion that it’s impossible to not feel your hairs stand on end by the sheer sight of their performance. Each cathartic breakdown is bled into by the band’s sincerity, thus providing a very human masterpiece. (4/5)

Following on from Elk Blood are up and coming emo punks The Sinking Feeling from Glasgow. This trio show off a well-structured display of 90s style indie rock jams in the same vein as Jawbreaker and The Promise Ring. Despite having only released an EP, the band appears to be very experienced in their craft. It is simply impossible not to fall in love with the hooks and the moody loud and soft dynamics the band are delivering in this small room. Definitely ones to watch in the coming year ahead, so take note of that name i.e. The Sinking Feeling. (4/5)

It will be a promising year once Nai Harvest’s debut album ‘Whatever’ is officially released but for now, in this small bar upstairs, the Sheffield duo’s new output can be enjoyed in an intimate live setting. The band is brash and wonderfully executed in their performance, contrasting the often shouted lyrics with the twinkling noodle guitar and abrasive percussion. Enjoyable, marvellous and thoroughly entertaining, it can be agreed with the strictest confidence that Nai Harvest is certainly the real deal. (3.5/5)