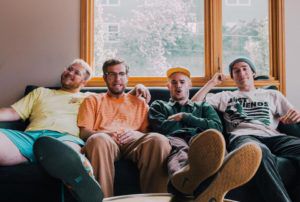 The January blues may be very real at the moment, but thankfully two of California’s finest emo bands are here to cheer us up. It’s disappointing that Don’t Worry are absent from the Brighton date of this tour, however, the main benefit of not having an opening band on a school night means we can all go to bed early for once.

Arriving on stage armed with an abundance of trumpets and good vibes Just Friends (4/5) can barely fit all of their members onto The Haunt’s stage, as they launch into the uplifting ‘Supersonic’ and ‘Keep Up.’

Mom Jeans vocalist Eric Bulter adds another layer of ska goodness to their repertoire, as vocalists Sammy Kless and Brianda Goyos León constantly bounce around the stage, feeding off the full crowd participation.

In between songs we’re asked to ‘vote’ on our favourite Austin Powers flick, the latter choosing ‘Goldmember’ (of course). With any other band, it might seem like an awkward request to win the crowd over, but Just Friends have already stolen our hearts. They’ve truly shown us the light that ska punk is still alive and kicking for a new generation of fans.

It would be pretty difficult for anyone to follow up such a stellar performance after Just Friends, but the mood changes from positive to sad, but in a way that you can laugh at yourself for it. Three years after it dropped, Mom Jeans (3.5/5)’s debut ‘Best Buds’ has without a doubt cemented itself snugly into emo history, and it shows with the bludgeoning loud sing-alongs to ‘Death Cup’ and ‘Edward 40 Hands’.

On the surface, you could say that Mom Jeans perhaps don’t have the deepest stories to tell, as they mostly revolve around stupid, but often hilarious shit that happens in your 20’s. However, there’s still a solid level of relatability in their core messages. This is emphasized with ‘Scott Pilgrim Vs My GPA’s end mantra ‘I sleep well alone’, closing their consistently solid set on a high note.