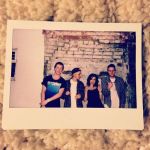 Placed between a One Stop convenience shop and a fancy bar is a narrow entrance. This leads into a small underground bar, perfectly catered and nourished for music events. Tonight, four up and coming bands show off what they have been concocting, considering the circumstances of course. Originally, Welsh emo punks Pipedream were scheduled to play here as part of a UK tour, with Glaswegians The Sinking Feeling. Unfortunate circumstances involving drummer Harry have prevented this; as a website our thoughts go out to him and his loved ones. Instead, The Sinking Feeling have decided to continue by only doing two dates of the tour, this and Glasgow, and what a show it is.

First act, Walleater from Leeds, face the hurdle of a dodgy sound system. Their moody alt rock style sounds murky and slow, but all the more relaxing, in a reflective kind of way. The quartet manages to secure the room at ease. Unfortunately the mixing levels, out of the band’s control, prevent them from grasping the cliff’s edge of remembrance. Regardless, the potential is there, so keep an eye out for them. (3/5)

With members coming from Birmingham, Sheffield and Huddersfield, Alt rockers Fade have been causing a trippy wave of excitement with their first demo. The promising quality is delivered just as remarkably well in a live setting. They blend heaviness and psychedelic melody in the same galaxy as Quicksand and The Smashing Pumpkins. Considering the fact they are a new band and they sound this glorious, fuck knows what level of genius future records and songs will sound like in due time. This lot are ones to watch in 2014, mark this reviewer’s words. (4.5/5)

The last time they played in Manchester, The Sinking Feeling blew our socks off. Having recently released an even more promising sophomore EP, entitled ‘Old Friends’, the hooks, charm and scrappy honed emo punk trio give more reasons why they are of interest. All three members contribute varying styles in vocals providing a melancholic range. The band dedicates their entire set to the aforementioned Pipedream, and what a fine tribute it is. (4/5)

Having swapped set times with the previous acts, Bristol grunge punks Milk Teeth justify their last minute headline slot with the following points. The combination of angst shouted and soft calm vox battle it out in grimy ambiance of shoegaze and grunge. Such a delicious sound recalls the likes of Sonic Youth, Dinosaur Jr. and the rock ‘n’ roll antics of The Jesus Lizard. Alongside Fade, these noise makers are sure to fix everyone’s eyes and ears in a vice next year, don’t miss out! (4.5/5)