Whether it was a case of the draw of star power, idle curiosity or a likely mix of the two, but former My Chemical Romance frontman Gerard Way attracted a remarkably large crowd for the time of day as he got proceedings underway for day two on the Radio One Stage. Despite being painfully aware that nobody in the sea of faces in front of him knew the songs he was playing, Way and his new backing band put in a solid if unfamiliar set. Gone are the gimmicks and theatrical emo rock, in its place Way, decked out in a rather natty blue suit and red tie combo, broke out his own unique, spruced and edged up take on Brit-pop style indie. Although the unfamiliarity of the material prevented the crowd from connecting with Way as strongly as both they and he may be used to, the quality of the fare on offer and the enthusiasm of the response it received markedly improved song by song. Anthemic mid-tempo power-pop number ‘Drugstore Perfume’ and the more frenetic ‘Get The Gang Together’ and ‘No Shows’, the latter of which showed the more fiery side of Way to which we’ve all become accustomed, were the most memorable of the songs taken from the singer’s forthcoming debut solo release. (3/5) (DW)

On paper having La Dispute on the NME/Radio 1 stage is a slightly odd choice, especially when good pals Touché Amoré are appearing on the Lock Up stage later today. Nevertheless the post-hardcore group still impress. The quartet are a tight knit unit with vocalist Jordan Dreyer dominating for the most part. However, a few too many weary heads in the crowd fail to provide a spark, leading to the band’s set to be quickly forgotten, even with this strong showing. (3/5) (SR) 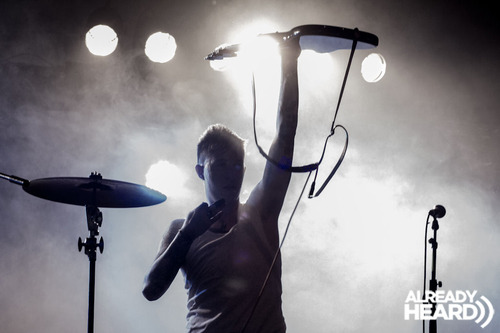 Slaves may not exactly have been the most recognisable act to rock the Lock Up Stage, but they did make one hell of an impression. The raucous garage-punk duo from Kent quickly show what they lack in members they more then make up for in churning out a hard hitting, properly cool sounding racket, The two have a surly anarchic presence and come across as an excellent blend of The Clash meeting the White Stripes by way of The King Blues. Slaves were easily of the brightest new acts to have performed all weekend and definitely one to keep an eye on. (3.5/5) (DW) 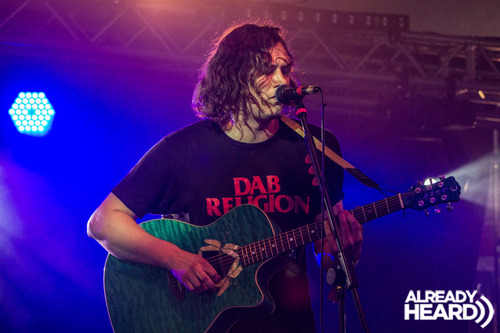 Each time The Front Bottoms return to the UK , they find themselves playing bigger venues, and whilst today’s appearance on the Lock Up stage isn’t the biggest stage they’ve played on, they still show what they’re capable of. With their brand of poppy indie punk, the quartet provide a warming set that highlights some of the bands best cuts so far; ‘Flashlight’, ‘Au Revoir (Adios)’, ‘Maps’ and ‘Twin Size Mattress’. Frontman Brian Sella leads the large crowd in mass singalongs throughout and drummer Mathew Uychich battles for center stage by battering hit kit with unrelentless force. Today shows just why The Front Bottoms are a band in demand. They have a feel good vibe that audiences thrive on and we expect many walked away as new fans. (4/5) (SR)

Norfolk’s finest Deaf Havana were never likely to disappoint on their return to the main stage, and so it proved. In a set massively brightened by some entertaining banter between the brothers Veck-Glodi and an unexpected exchange between James and comedian Bill Bailey, who happened to be watching from the side of the stage, the boys showed once again that they are one of the most dependable live mainstream British Rock acts around. After a fairly overcast start to the day the main stage is suddenly bathed in sunshine as DH break into ‘22’ and its immediately high spirits all round as the soulful gravel of Veck-Glodi’s voice helps to lift the crowd. ‘Boston Square’ and ‘Mildred’ both sound great in the festival atmosphere before old favourite ‘Hunstanton Pier’ gets a very favourable reaction, and the moving ‘Caro Padre’ brings the set to a particularly powerful and poignant close. (4/5) (DW)

No band gracing any of the Bramham Park stages could possibly have put in quite as triumphant a showing as Twin Atlantic did on the Radio One Stage. The boys from Glasgow firmly stamped their place as guaranteed future R&L headliners with a blistering set played to a deafening tent. New tracks ‘I Am An Animal’, ‘Fall Into The Party’ and ‘Brothers and Sisters’ all sounded immense live and slotted into a stellar rapturously received setlist that also featured the always exceptional ‘Free’, ‘Make A Beast Of Myself’ and ‘Crashland’. Meanwhile closer ‘Heart and Soul’ sent the packed out stage into near hysteria, and its all too easy imagining the track blasting out at the end of the day on the main stage in the not too distant future. (5/5) (DW)

Over on the main stage, Jimmy Eat World are playing the first of two sets. On this occasion, we’re provided with a fan-favourites set dominated by singles. As always, the Arizona band receive a warm reception, and even though tracks from ‘Bleed American’ are heavily featured, more recent songs (‘My Best Theory’ and ‘I Will Steal You Back’) are appreciated by the reasonably sized crowd. Whilst it wasn’t the band’s best set, it certainly warmed up the audience for the band’s later set on the Lock Up stage. (3.5/5) (SR)

Speaking of the Lock Up stage, Touché Amoré made their welcomed return and demonstrated why they are so revered by the hardcore community. From start to finish, Jeremy Bolm’s words are sung back line-for-line creating a passionate, lively atmosphere that is certainly required from a Touché Amoré show. The California definitely put on a strong showing, and provided one of the best sets of the day. (3.5/5) (SR)

Similar to Mr. Way earlier in the day, former Distillers leading lady Brody Dalle had to contend with the challenge of wowing a crowd with new solo material that few were familiar with. However Dalle rose to the task admirably, smashing out a set loaded with angst, swagger and ballsy high energy punk rock. Dalle still has undeniable starpower and oozes attitude, sex appeal and raw passion and spirit with every move and snarled lyric. Dalle and her band’s damnably fun set seems over far too quickly and provides a great advert for her recently released solo record. (3/5) (DW) 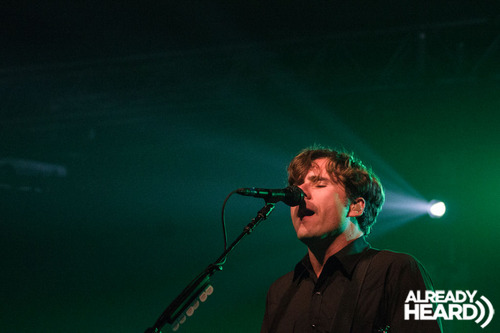 Whilst their earlier set had served as a warm up, for many the prospect of Jimmy Ear World performing their ‘Futures’ record front to back was something not to be missed. Playing to a packed out Lock Up tent, JEW played their way through the 2004 record with complete accuracy. For some it was pleasing to hear songs such as ‘Kill’, ‘The World You Love’ and ‘Drugs or Me’ given a live outing. Whilst the final album track, ’23’, leads to a momentous singalong that is truly heart-warming before the quartet treat fans to brief encore made up of classic Jimmy; ‘Sweetness’ and ‘The Middle’. The latter sends the large crowd into a frenzy and Jimmy Ear World are given a strong send off. (4.5/5) (SR)

After covering from the heavy downpour, it was time to see if Paramore had the capabilities of headlining as big as Leeds Festival.

If anyone had any doubts of Paramore’s credentials of topping the main stage are quickly shown they certainly capable of rising to the occasional. Whilst past main stage appearances from the Tennessee group have seem disjointed, tonight shows they’ve grown as a band and have become a festival-conquering force. 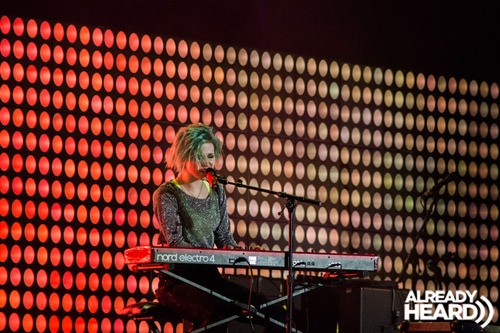 If anyone had any doubts of Paramore’s credentials of topping the main stage are quickly shown they certainly capable of rising to the occasional. Whilst past main stage appearances from the Tennessee group have seem disjointed, tonight shows they’ve grown as a band and have become a festival-conquering force.

Hayley Williams dominates and has evolved along with the band. She’s no longer the red haired teenage girl we saw when the band first emerged in 2006. She’s now a confident and commanding young front woman, who looks and sounds at home on a stage as big as the main stage.

Having produced a plethora of mass hits in recent years, the trio have the numbers to keep the momentum going throughout. Opening with ‘Still Into You’ and ‘That’s What You Get’, Williams is charismatic, and bassist Jeremy Davis and guitarist Taylor York are equally complimentary. Whereas the drum work of former Underoath sticksman Aaron Gillespie gives the band sound a meaningful force that fits the large setting.

Later on, ‘The Only Exception’ sees a mass of sway of phones in the air. Whilst the closing chorus of ‘Misery Business’ sees Williams bringing on a fan to lead the massive crowd. Finally ‘Ain’t It Fun’ ends the night on a high with Williams bringing on her little sister to dance along with the rest of the Leeds Festival crowd. It’s a heart-warming moment. 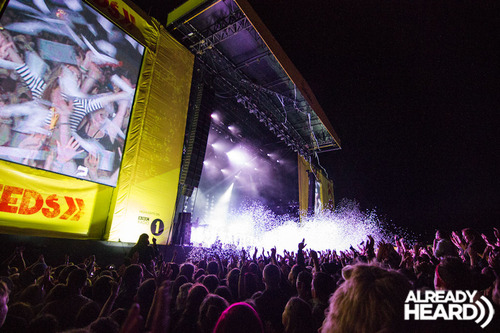 On the whole Paramore proved their worth tonight. They are the complete package both musically and in stage presence. With a reliable set of songs, they produced a satisfying show that assure they will be back at the peak of Leeds Festival sooner rather than later. A certified highlight of the festival. (5/5) (SR)