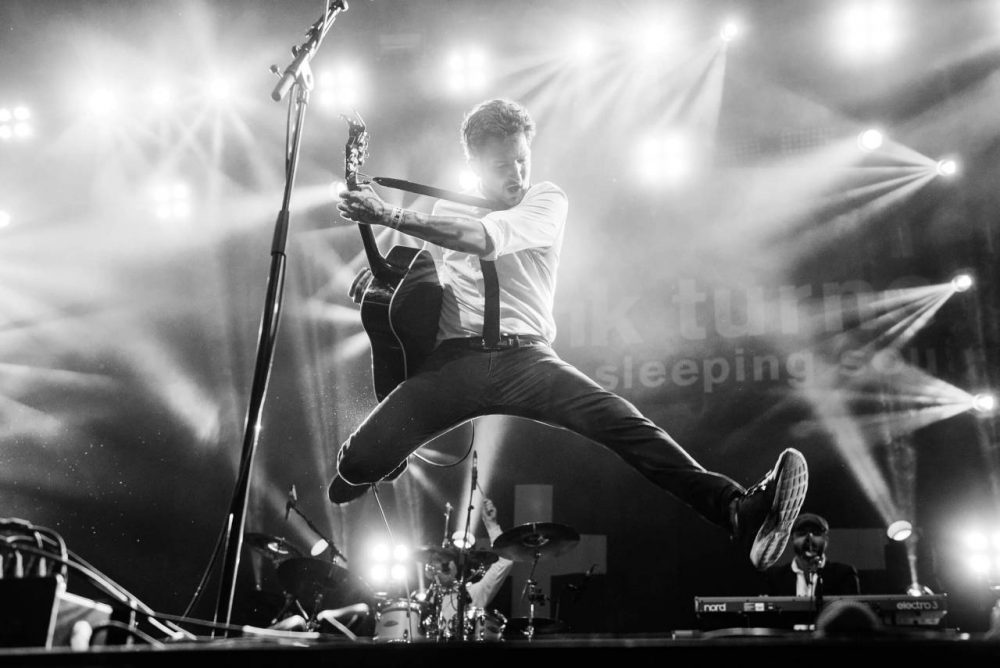 There is a celebratory mood in the air tonight, however, it’s not because it’s the festive season. Tonight marks a substantial milestone for Frank Turner. It is a culmination of over 10 years of living on buses, trains, planes, and wherever he and his growing touring crew can rest their heads. Where could Turner and company choose to celebrate such an occasion? An intimate show in his home county of Hampshire? Or somewhere in London? Nope. He’s picked his favourite UK venue – Nottingham’s Rock City.

Tonight isn’t just another tour date; Turner was here just last Friday for that. This is something else. Something special.

Before he truly kicks the party off, Turner pulls double duty as he joins openers The Tailors. A choice of Turner’s (he states they’re his favourite band), it’s their first show in six years having seemingly reunited for this special occasion, with Turner complimenting the band on electric guitar. Together the quintet showcase a pleasing set of laid-back folk rock. With a sold-out room already in attendance, there is an appreciation for what The Tailors have to offer. Their songs are carried with earnestness and you can see hints of their influence on Turner. By the end of their set, many are on board with their spirited style, with Turner sharing a story that if it wasn’t for them, he probably would of ever picked up an acoustic guitar. It adds to gratifying tone that continues throughout the night. (3/5)

Next up longtime friend Beans On Toast aka Jay McAllister momentarily brings the mood down with the introspective ‘2016’. Nevertheless, he soon provides a set of joyful folk songs that are easily relatable. ‘Down the Pub’ could be heard in any London boozer as Jay and his pianist. For all of his lyrical flaws and simplicity, BOT carries himself with charm. ‘Life’ is full of romanticism. While ‘It’s Natural’ serves as a tribute to marijuana. Overall Beans On Toast compliments the celebratory mood of this evening. (3/5)

Despite his critics and haters along with the trial and tribulations life as a musician on the road brings, after 2000 shows it’s clear Frank Turner and the Sleeping Souls are survivors and have connected with people all over the world. There’s people from Germany, France, Italy, America and probably more here tonight. Young people. Old people. Punks, indie kids, folk fans, rockers and more are in attendance. Turner and company have, and continue to, succeed at their purpose; to bring people together through music.

Opening with ‘I Knew Prufrock Before He Got Famous’, every word is sung in unison as for the next two hours Turner becomes party leader. The early part of the set serves as a short “best of” set as ‘The Next Storm’, ‘I Still Believe’, ‘Losing Days’, ‘Try This At Home’ and ‘Long Live The Queen’ are delivered with conviction before Turner and the Souls pay tribute to Motörhead’s Lemmy and tonight’s setting with a quick black of ‘Ace of Spades’.

Later on ‘St Christopher Is Coming Home’ sees Turner returning to his solo roots yet accompanied by his devoted army of fans. ‘The Road’ reverberates word for word throughout Rock City. While the reliable ‘Photosynthesis’ once again proves to be a highlight with its larger-than-life chorus before an encore including ‘Recovery’, ‘Get Better’ and ‘Four Simple Words’ ends the night on a satisfying high. Simply put, Turner has a dependable collection of songs that can easily bring a crowd together, whether it’s London’s 93 Feet East, Wembley Arena or Rock City.

Without a doubt tonight is a celebration, not just for Frank Turner but for all of those who have joined him along the way. Yet for Turner, even after 2000 shows, he shows no signs of slowing down. Tonight is a reward for his dedication and passion for his chosen profession and lifestyle. It is that commitment that will surely drive Turner and company to another 2000 shows and beyond. (5/5)