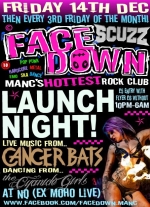 Having heard nothing but good reviews about London’s famous night FaceDown, I was delighted to hear that it was being brought up to Manchester for us northerners to get a taste of the club night. Not only this, but the launch also brought along the incredible Cancer Bats to treat metal lovers to one of their boisterous sets.

FaceDown Manc started at 10pm but as most do when attending club nights, I turned up fashionably late arriving at 11. Unsure of what to expect regarding attendees at this still reasonably early time, I entered room 2 to Your Demise’s ‘The Kids We Used To Be’ which already set the night off to a good start for me. Despite the night being seemingly quiet at this point it didn’t concern me, knowing that the crowd would start building nearer to the eagerly anticipated Cancer Bats set at 1am.

I was proved right by my predictions and although room one seemed to initially drown the amount of people in it with groups scattered about, the crowd naturally increased as time went on. This already promising turn out created a comfortable atmosphere in NQ Live (formerly Moho Live) and by 1am a significantly large crowd awaited by the stage for the legendary Cancer Bats to make an appearance.

Opening with crowd pleaser ‘Hail Destroyer,’ Cancer Bats got the crowd well and truly pumped with FaceDown Manc feeling no longer like a clubnight. Impressively, the band had travelled from Birmingham having played a show there earlier on in the evening; however this should be a walk in the park for the quartet having played 6 shows in one day as part of their Pentagram Tour in April this year. Continuing to please with a set consisting of tracks such as ‘Darkness Lives’ and their rendition of ‘Sabotage,’ Cancer Bats well and truly smashed it with the first half of the crowd interacting in pits throughout their set.

Entering party mode in the main room with classics such as Blink-182 and Green Day after Cancer Bats performance, everybody seemed psyched and the room was filled with people seemingly having a great time. Up next to please the crowd (in particular the males in the room) were the Cyanide Girls who took to the stage in their underwear to tease the crowd with pole dancing and a fire display; although I feared for getting burnt as the sparks were being sprayed out into the crowd.

The night was open until 6am and despite having had a fantastic time I had to call it quits at about 3:30am. FaceDown Manc proved to be a great alternative clubnight and it was made unique with the featured live performance, which is something that I have never experienced before. The DJ’s played some great pop punk, hardcore, pop and metal jams, the atmosphere was very laid back and although some drinks were fairly overpriced I certainly look forward to attending FaceDown Manc next month!