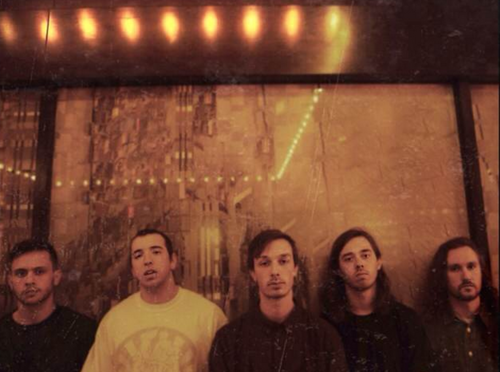 A trio of bands all touring the UK for the first time, and the positive summer vibes which always bodes well for the pleasantries within the human race, makes for a rather particular show. Particular? I meant special of course.

First on the list is Headroom, who have turned plenty of heads with their debut self titled EP released earlier this year. New EP ‘Carry Me Away’ is soon to be released and so the set comprises of material from both. The band are it’s own band and take influences from 90s emo and post hardcore circa 2009 Title Fight. Despite Headroom being a side project of bands such as Nai Harvest and Survival, it still has time to take influences from these two very contrasting bands.

It may just be a side project, but there’s certainly enough depth in the songs and the show for it to be much more. Once crowds are comfortable with all of the new material I’m sure it’ll be a more riotous affair. Don’t count on seeing Headroom any time soon due to the commitments of the prior bands mentioned, but make sure you do when you can. (4/5)

I’ve been a fan of Diamond Youth for quite some time. Seriously. Weezer/Jimmy Eat World influenced pop/rock songs with smooth, Beach Boys melodies and harmonies? It’s an absolute dream concoction for myself, and live was even better. Easily one of the tightest bands I’ve ever seen and everything was incredibly flawless. There’s only 3 EPs out at the moment but Diamond Youth’s set dipped into each one, which was a brilliant showcase of everything the band are good at.

And then, right, then you find out that they’re all in other bands such as Trapped Under Ice, Terror and Down To Nothing and then you really realise how good these guys are on the whole. To be able to write music is a great talent, but to be able to write music of such completely juxtaposed genres is, to me, an even greater talent; not just one trick ponies by any means. Here’s hoping their next trip to our shores has a collection of album songs under their belt. (4.5/5)

Last but not least is Citizen. Again, this is the band’s first time over to the UK and you’d think it was their last judging by the reaction of the crowd. The one thing missing from both Headroom and Diamond Youth, despite how great each were, was the lack of reception from the crowd. It’s clear that is a pretty Citizen heavy crowd and so it’s where the real party starts. You know the drill; mic grabbing, crowd surfing and plenty of stage dives.

Whilst the band’s performance may not be as tight as previous examples, there’s still so much passion and expression found in every member and it’s why debut LP ‘Youth’ worked so well. The set focuses heavily on ‘Youth’ for it’s clear impression on fans across both sides of the Atlantic, but the split with Turnover and even a new track are also thrown in for good measure. (4/5)

They say variety is the spice of life, and tonight proved it. Tour of the year so far.