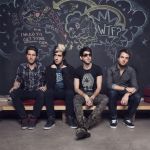 Everyone on Oxford Road tonight knows there’s a gig on at the Academy. The big giveaway is the horde of fans that stretches from the entrance of Academy 1 right past the Students’ Union that houses rooms 2, 3 and Club as well as past the museum. And with the demographic ranging largely of females under the age of 16, you could have a wild stab at who’s headlining tonight. Well, who’s headlining two nights in a row, in fact.

With security in place to literally stop the kids from running and breaking their necks, Only Rivals kick off all proceedings of screaming and more screaming; but fair play to the 4 lads from Ireland. Having reformed in the back end of 2013 (previously being known as Homestar Runner) the lads have cemented some pretty decent support slots in place already, only recently having released their EP ‘Details’. Whilst a lot of the crowd are new to the rock/pop punk outfit, there’s clearly enough here who have done their research and are singing every word. The band have got the moves, the looks and the songs to really conquer and this really is only the beginning. A very entertaining set and it’ll be interesting to see how they whip up a storm on New Found Glory’s ‘Pop Punk’s Not Dead’ tour in Autumn of this year. (3.5/5)

Now with the room finally full and A&E already having to go to work on passed out girls and the like, Tonight Alive brace the stage very boldly. Jenna McDougall is a brilliant front woman and clearly enjoys being up on that stage, encouraging all sorts of singing, claps and all round crowd involvement. The sound from the stage and the lights give much more of an impact than the boys previously, but it’s expected that each set’s going to top the last one, especially when shows like this can be quite visually heavy as another form of entertainment. Despite knowing absolutely none of their material I did rather enjoy watching. It’s good to see bands doing well for all the right reasons. (3.5/5)

And of course, last but not least, is All Time Low. As expected, the sound is the best it’s sounded, the lights dazzle so bright that I almost lose my balance and the screaming that occurs is actually rather painful; I don’t quite understand what it is about them, but whatever All Time Low do, they do it right. It’s a set packed with old and new material, with admittance from myself that I did sing along to ‘Weightless’ and ‘Lost In Stereo’. Yeah, if you’re a regular reader of Already Heard then All Time Low probably aren’t you’re thing. Then again, they’d agree. You’re not their demographic. However, I can’t help but enjoy certain fleeting moments when I know what’s going on. There’s not as much direct crowd involvement from Alex and Jack in the way of ‘clap your hands!’ and the sort of stuff that Jenna poured out so effortlessly, but there’s a hell of a lot more casual chat, also known as ‘banter’. (4/5)