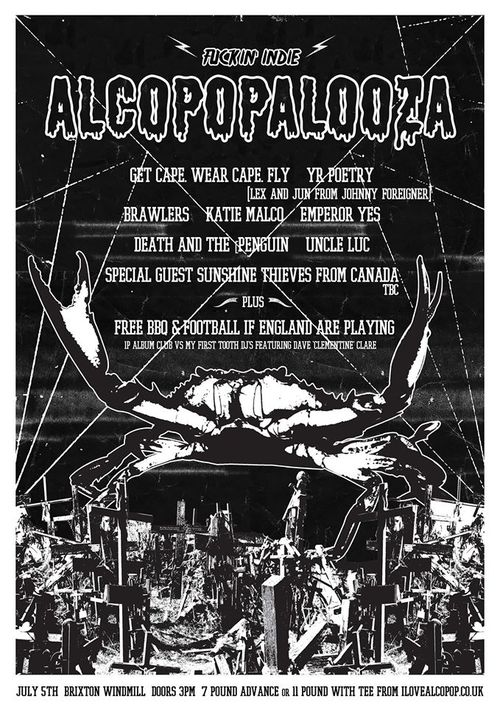 Now in its fifth year, Alcopopalooza may not spring to mind when cataloguing the many delights of British festival season, but whilst thousands descend upon Knebworth, the annual event at this little venue in the South East of London never fails to bring a smile to the face and more than a few beers to the mouth to the dedicated followers of Already Heard favourites Alcopop! Records.

Things were already well underway once yours truly arrived on the scene, including an impromptu reunion of much-missed Alcopop! legends Stagecoach, who performed ‘We Got Tazers!’, but I arrived in time to catch the majority of The Lion And The Wolf’s set. TLATW is the performing moniker of the handsome and hirsute Tom George, who performs in front of a lucky few (well, those who could resist the appeal of watching Argentina vs Belgium) gathered underneath the Windmill’s canopy. He peppers his set of Dallas Green-cum-Bon Iver influenced melancholic (but not morose) tunes with a couple of well-received covers, including one of the theme tune to kids TV show The Raccoons. Apparently not big in Germany, much to Tom’s chagrin. (4/5)

The aforementioned Stagecoach’s break-up has led to a couple of splinter projects, and that of their drummer Matt Emery was given an airing. Trading in the skins for a spot of ivory-tinkling, his soaring vocal is matched to ambitious post-rock in this new guise, garnering comparisons amongst attendees of a one-man Maybeshewill. Expect big things. (4/5)

The most popular English man’s name ever (probably), John is not a name you’re likely to forget, in both handle and in sound. This is the third time I’ve caught this two-piece, who are both called John (obviously), and this performance may just be the best of the lot. Combining the best parts of bands like Mclusky, Pulled Apart By Horses and Winnebago Deal, the duo may stick out like a sore thumb on this lineup, but are the most likely to stay in the memory, somewhere in the haze of the next morning. (4.5/5)

Alcopopalooza is an event where the bands take on an equal footing to the people around (and the Windmill’s legendary BBQ), so I only saw sporadic moments of the next two bands (Death and the Penguin and Emperor Yes), the two following (Brawlers and Yr Parents, the brainchild of Alexei and Junior from Johnny Foreigner) even less so, as they were subject to an unfortunate clash with the Netherlands’ 0-0 thriller against Costa Rica. From what I caught, DATP’s math-rock melodies were enjoyable, Emperor Yes’ cheesy synth-pop less so, wasting the considerable talents of Three Trapped Tigers’ Adam Betts on drums.

The main event of the night was Get Cape. Wear Cape. Fly, on his final run of shows before putting the GCWCF moniker to rest indefinitely. The majority of the set is dedicated to debut record ‘The Chronicles Of A Bohemian Teenager’, with highlights such of ‘War Of The Worlds’, ‘I Spy’ and ‘Glasshouses’ inspiring singalongs and dodgy dancing in equal measure. His introductory track (‘Somebody Gon’ Get Their Wig Split’, the entrance theme of WWE wrestler Mark Henry) may have been created to inspire confrontation, but his set only engenders love between perfect strangers on the Windmill’s dancefloor, belting out the aforementioned album’s title-track in each other’s faces. The Windmill was one of the venues where GCWCF got his start, so the fond farewell Mr Duckworth and his laptop receive is apt. As for the reverie afterwards… Well, let’s just say there’s a reason that Alcopopalooza is an annual highlight. Here’s to number 6 – why don’t you pop along? I’m sure Roofdog would love to see you. (4/5)