Linkin Park and Fall Out Boy Announced for Download Festival 2014 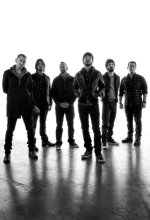 Linkin Park have been announced as headliners for the Saturday of next year’s Download Festival. They will be performing their debut album, ‘Hybrid Theory’ in full.

Whilst Fall Out Boy have been announced as special guest on the same day.

The news follows yesterday that Avenged Sevenfold will headline the opening night with Rob Zombie appearing on the same day.