Jamie Lenman: Fundamentally Mixing It Up 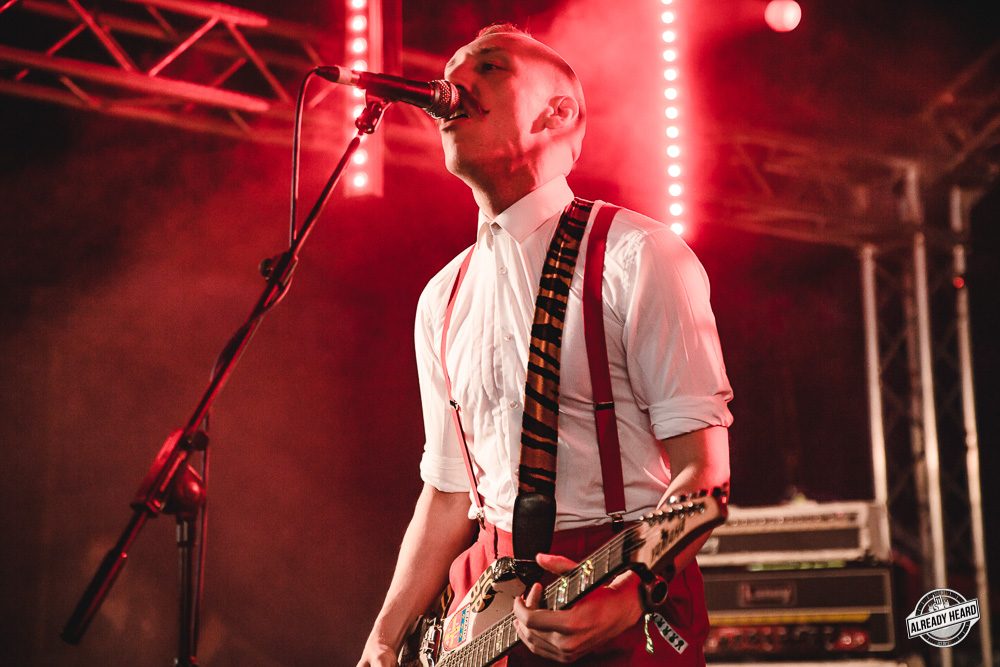 “It sounds pretentious, but I love these songs. I love them more than songs I have written myself because they have been with me my whole life”

For many bands, these days, being included on a noteworthy playlist on Spotify or Apple Music is more important than landing a respectable chart position. As consumers, the playlist, and the ability to hit shuffle, has become commonplace. Yet there are some traditionalists who want to maintain the notion of recognising an artist’s work through the album format. Amongst them is Jamie Lenman.

“To me, as a musician, the concept of an album of 12 songs tied together, a well-written album, is a bit sacred, even though we’re in a period of history where digital music is pulling us away from the album,” he tells Already Heard during our time at 2000trees. He continues, “For me, I still think of in terms of that format. I don’t have things on shuffle. It can be fun at a party. If you put together a playlist, sure put it on shuffle.”

Admittedly for Lenman, the notion of being against shuffling is ironic. His return to Upcote Farm comes days after releasing an intriguing covers album titled ‘Shuffle’. “I don’t really approve of the shuffle,” he explains. “I had an iPod, when they first came out, I had one of those big white ones. We had it on shuffle for the novelty and then I realised I was losing the concept of an album.”

‘Shuffle’ is far from the routine covers album with Lenman’s take on songs from the Beatles, Cyndi Lauper, and Annie Lennox, being placed alongside reinterpretations of TV (‘Popeye’), film (‘Taxi Driver’) and video game (‘Wolverine: Adamantium Rage’) themes. While ‘Song of Seikilos’ hails from ancient Greece and is considered the oldest complete musical composition in existence. Overall, the record is a representation of Lenman’s interests, “’Shuffle’ was a way to explain why all these things are coming from so many different places. If I did shuffle my record collection, this is what it would sound like.”

Despite its title, there is a structure to ‘Shuffle’ and its sequencing works fittingly, keep listeners attention throughout. “We knew we were going to open with ‘Tomorrow Never Knows’ and to end with ‘The Remembrance,’ because where [else] could those tracks go other than the start and the end,” explains Jamie before commenting on the album’s order. “With everything else, we had to work it out. Which isn’t to say we didn’t think about it very carefully. I think a lot of people assume the sequencing is random, it’s anything but. I wanted it to still have a flow and a shape.”

On the surface, it’s somewhat not surprising to find the concept behind ‘Shuffle’ daunting. It’s a concern that producer, Space, shared with Lenman. “At one point he said to me ‘maybe we should do something different, take some time to really think about this, to really make sure it’s definitely what you want to do,’” reveals the moustachioed Surrey native. “I respect him so much, that I did. I put the whole project on hold for a couple of months, and I tried to get excited about a different kind of record, but I couldn’t. It would have been forcing it.

“Anything else I would have done would have been a cop-out, to just write another ‘Devolver’ in my sleep and put that on wax. That would have been taking the piss out my supporters and the people who care about music. I owed it to them, and to me, to what was really in my heart.”

As discussed, ‘Shuffle’ isn’t your typical run-of-the-mill covers record. Its 14 tracks carefully chosen, allowing Lenman to pay tribute on songs he has long adored, “It sounds pretentious, but I love these songs. I love them more than songs I have written myself because they have been with me my whole life. Even before I wrote my first song, I heard the Beatles and Annie Lennox and Cyndi Lauper. So these are really important to me.”

Amongst the music-centric cuts, there’s ‘You’re the Boss‘. It serves as a reinterpretation of a short 2007 film starring Richard E. Grant and Paul McGann (Lenman’s favourite actor – “It was unbelievable. I still can’t believe it”). Lenman’s take goes down the radio play format, allowing him to try out his acting chops alongside McGann yet Jamie is assured his future doesn’t lie on stage and screen. “Only in my wildest dreams. Every rock n’ roller wants to be an actor, and every actor wants to be a rock n’ roller, and it’s very rare that someone succeeds at both,” he admits. “When I listen to that recording, that’s an actor and someone just weekending, someone who is doing their best, which is all you can ever do.”

While the reenactment of the scene brings the album to an intense holt, Lenman gives the impression that spoken word moments like ‘You’re The Boss’ and ‘The Pequod meets the Delight,’ (from Moby Dick) have been ignored by listeners. Yet for him, he considers them the bits he’s “most interested in” calling them “really innovative” because they are “the bits that are most unlike any other record.”

Throughout ‘Shuffle,’ Lenman leaves his own stamp on some of the more well-known songs such as Adamski & Seal early 90’s acid house hit, ‘Killer’, along with a pair of Beatles covers; ‘Tomorrow Never Knows’ and ‘Hey Jude’. On the latter, he’s brilliantly turned the anthemic “Na-na-na na, hey Jude” line into two-minutes of swirling, heavy-drenched underpinned distortion. “I do hope when people talk about the pantheon of Beatles covers, they remember there are some that were a little bit different and that mine are in there,” Jamie reflects when questioned about leaving his mark on the chosen covers. It’s clear from his love for music and the songs picked, that they can’t be spoilt due to their timeless quality.

“Songs like the ones I have chosen, especially The Beatles ones, they’re indestructible. You can try as hard as you want to break them but you will never ruin them. They’re shatterproof really. You can treat them as rough as you want, and they will still bounce about which is the beauty of it.”

Lenman‘s love and care for the tracks that make up ‘Shuffle’ is clear, to the point that he aims to treat the album like it was one of his own. Although his attention will temporarily be shifting as he fills in for Black Peaks’ Will Gardner at 2000trees’ sister festival, ArcTanGent, later this month. “I’ve got the tracks on a playlist and I’m listening to it non-stop to try and get my head around those vocal parts,” Jamie tells us before we jokingly questioned if the playlist was on shuffle.

Beyond that notable guest spot, Lenman plans on giving ‘Shuffle’ the right treatment. “I’d like to get some dates of my own in before the end of the year to really to go deeper into my new album, because these [recent] shows I’ve only given a taster of it, I’ve only been playing the singles. I like to give people some time to get used to the material before you really batter them round the head with it” admits Jamie. “I want to spend the rest of the year really concentrating on this record to give it its full due, then maybe sometime next year I’ll begin to start looking towards the next thing.”

Whether or not he makes it on to playlists, you get the feeling Jamie Lenman doesn’t care about that. He’d much rather continue to release unique, genre-crossing music, while celebrating and supporting emerging and diverse talent, just like his “festival within a festival” ‘Lenmania II’ did at 2000trees. These qualities merely add to Lenman‘s down-to-earth yet distinctive persona.

‘Shuffle’ by Jamie Lenman is out now on Big Scary Monsters.