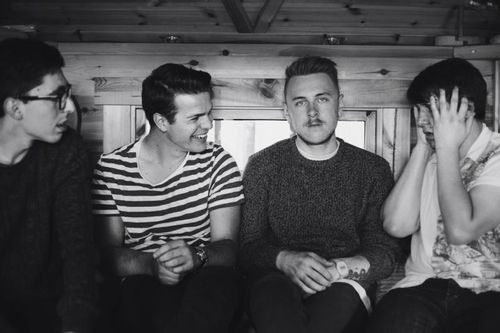 Since we last featured Yearbook as part of our “Recommends” feature in November 2012, the Andover-based quartet have been hard at work writing and road-testing new material, which will see the light of day on March 5th.

The EP titled ‘Old Bones’ sees Yearbook dealing with the stresses of committing yourself and putting other priorities to the background. The end result is a collection of songs that shows the bands growth, adding depth and focus, as well as taking a somewhat darker approach both musically and lyrically.

Vocalist/guitarist Andy Halloway recently took some time out to discuss the new EP with Already Heard. Halloway also spoke about the importance of road testing material and their forthcoming tour with Swim Good.

Already Heard: Can you introduce yourself and your role in Yearbook?
Andy: Hi, my name is Andy and I sing and play the guitar at the front in Yearbook.

AH: Last time we spoke to you was back in November 2012. How has life changed for Yearbook over the past 12 months or so?
Andy: We spend more time playing gigs and driving around in a van now, which is great. We have written and recorded the whole of ‘Old Bones’ as well so its nice to have new material to play. As a band we have become a lot more focussed as well, I think having a record to work towards has helped a lot with that.

AH: It’s been quite a while since you released any new music. Musically what can we expect from ‘Old Bones’?
Andy: If you were to compare it to our first EP ‘All Squares and Circles’ you would probably be a bit surprised it’s the same band. We have not become a funk band or anything but we have certainly got a bit darker and I feel the songs have a lot more depth to them now. Although I would say that I suppose.

AH: Although you did release a free single (‘I Could Be Anyone’) last year. How was the response to that and how does that track connect to the six songs on ‘Old Bones’?
Andy: The response to ‘I Could Be Anyone’ was awesome. We put it up for a “pay what you want” download and people were far more generous than we ever thought they would be. Unlike the songs on ‘Old Bones’, which have an overall theme that underpins the record, I would say that ‘I Could Be Anyone’ is a bit more of a standalone track that doesn’t really connect to anything other than the one event it was written about.

AH: You’re also set to tour with Swim Good next month. How important is it for you to road test the new songs?
Andy: Pretty important. They have to work live above all else as that’s the bit that makes or breaks songs and bands.

AH: Ok here’s a standard question – why should people come and see Yearbook and Swim Good next month?
Andy: Because both bands are on top form and will be playing new material. So not only will you be able to hear some of ‘Old Bones’ before it’s out, you’ll also get a chance to buy Swim Good’s EP before its officially out. That, my friends, is a deal and a half.

AH: Following on from the EP release and tour. What else does Yearbook have in the pipeline?
Andy: More tours, more shows, more music, just more…..Yearbook.

AH: Do you have any final words for the Already Heard readers to close the interview?
Andy:
Hang out or Hang out. Oh, and buy ‘Old Bones’ on the 5th of March. Go on, do it.

‘Old Bones’ by Yearbook is released on 5th March.