Interview: Upon A Burning Body 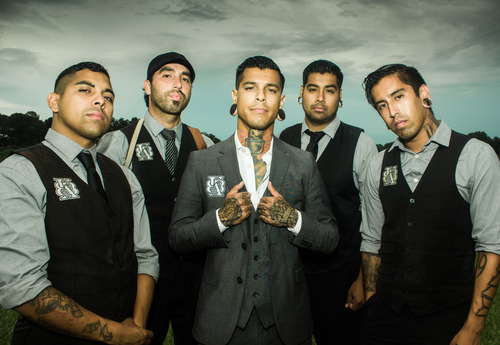 Upon A Burning Body strike a very dapper presence when they take to the stage, dressed in black trousers, grey shirts and black waistcoats emblazoned with their logo on the lapel, before they unleash their live show on you. They are a frantic live band, with a relentless touring schedule. We caught up with bassist Reuben Alvarez just before they went on stage in London to support Five Finger Death Punch and talked about their own cocktail, favourite place they have visited, the next album and Slipknot. Here’s that interview.

Already Heard: This looks set to be an epic year on the road for yourselves. You have already played Soundwave, are currently on tour with Five Finger Death Punch, you have Skate & Surf Fest coming up as well as a short US headline tour in May and a support slot across Canada with Emmure coming up. Does the rest of 2014 look set to go the same way?
Ruben: Absolutely it’s all down to our booking agent, so it’s like every other month and every other day is up for grabs and so he’ll book it off. If he can he’ll book up every single day.

AH: Even your off day on the tour you did an extra headline show in Bristol.
Ruben: Yeah, as much as they can they’ll book it. To stay busy and to stay relevant y’know.

AH: And it’s been a good tour so far?
Ruben: Amazing, amazing opportunity. It’s a huge opportunity for a band like us to be on this tour and everybody notices we’re the odd-ball. We’re a bit heavier and crazy. It’s awesome.

AH: Glad it’s going well for you. What song do you most like to play live and what is the story behind that song?
Ruben: For me, let’s see there’s a couple I like to play, mine is ‘Mimic’. I think the reason I like ‘Mimic’ so much is that it has a lot more of the pretty sounding melody guitar melodies and I love the way it switches from really intense to great pretty, almost like Maiden high lead. Musically it’s my favourite and the words too, it has great lyrics for the crowd to sing along, so yeah.

AH: What is the most important lesson you have learnt or the best piece of advice you have been given during your time with Upon A Burning Body?
Ruben: Mine is that I always try to tell kids and especially the younger kids that still have their whole lives ahead of them, is I try to tell them to pursue your dreams because that’s the most important thing in life. I feel that a lot of people loose that….a lot of people that are stuck in these jobs, they’ve never been outside of their country or out of their state and I’m like you guys have got to see the world y’know. You gotta save up and take off and go experience everything, cos how do you know what ou like or what you wanna do, y’know what I mean. Always have a dream that you wanna aspire to, always have that goal, y’know other than work and other than yeah I wanna retire. Have that big dream you are shooting for because I think everyone should have one.

AH: Who is the band or artist you have most enjoyed seeing or been most impressed by live?
Ruben: Let’s see, that’s a tough one, there’s so many. For us I think the most amazing moment was being able to watch Slipknot side stage, cos that’s a show like no other. Being able to see them and the way they get into their show like on and off stage. We saw some stuff go on backstage that nobody saw and we’re like holy crap, this is real, like they’re really in the mode. They’re all about it. It was our moment to be like “WOW! This is amazing, we’ve arrived. This is so cool, we’re touring with Slipknot on Mayhem”.

AH: Do you remember your first gig with Upon A Burning Body? How has your approach to live shows changed since then?
Ruben: I do and it’s so funny cos our first record was so much more intense and just more technical and we started seeing like okay we have a good following, but during our shows not so many people are moving, our music is super technical and so we noticed that these parts of our songs are what get the crowd moving, so we amplified that in the second record, we were like we’re going to do more of that and get more people involved so that the crowds go crazy. So now we’ve started adapting our records more to seeing what works live and we know what works for us and we’re just trying to amplify that every record.

AH: And have you seen the positive reaction from the live show from the second album?
Ruben: Definitely, like every song on the second record gets the crowd going so much more. Its set up like perfectly to get them jumping and screaming and clapping and doing everything, anything and everything.

AH: Apart from band, crew and the obvious laptop and phone, what is the one thing you do not go on tour without?
Ruben: Without? Wipies! I’m pretty sure you’ve hear that a lot, most bands will say that. Wipies are like a necessity when you don’t have a shower or you can’t always keep clean, so you’ve gotta go and do the wipey shower and burn bath, deodorant, obviously all the hygiene stuff is the most important and if I ever forget that I’m like “I gotta go get some stuff” cos it’ll get bad in the bus if not.

AH: Alcohol features noticeably in your songs and videos. What would feature in an Upon A Burning Body cocktail drink?
Ruben: Ah that’s awesome. We actually have our own cocktail drink that we invented and it’s called the Southern Tren Killer.

AH: And what’s in that?
Ruben: It’s a Jagerbomb which we call the tren and the killer is the shot of whisky you drop inside the Jagerbomb. So it’s a mixed Jagerbomb as I said already and then you get another drop on top of that of whisky, so it’s two shots in one and that’s the killer right there!

AH: And there deteriorates your evening!
UABB/Ruben: Yeah two shots and an energy drink, it’s like you don’t know what to do!

AH: You are still touring your 2012 release ‘Red, White, Green’. Not that it seems you have the time, but are there any plans in the pipeline for album number three?
Ruben: It’s already done, it’s already in the bag, we’re just trying to finish it up. Do all the artwork and get all that stuff together and hopefully we’ll be releasing it by summer, that’s what we’re hoping for. It’s pretty soon, it’s coming up and we’re all excited. Everybody that we’ve showed it to is pumped on it.

AH: So it gives you the chance to start touring that out in the latter part of the year.
Ruben: Yeah start prepping it, making sure we play the songs and deliver them.

AH: Are you playing any of the new songs from that tonight?
Ruben: No not yet, we can’t play any yet, but I think for our tour in the summer we’ll be doing some new jams.

AH: Which question have you never been asked in an interview that you would like to be asked and what would your answer be?
Ruben: Good question….never been asked….hmmmm that’s a good one….let me see, I’m trying to think.

AH: It’s alright it usually gets interesting answers.
Ruben: Yeah I’m trying to think what is a good one. I think a cool question is like the most interesting place we have been. Right now it is definitely Thailand, we just got back from Thailand and that was it insane. I got to eat insects, I ate a scorpion, did all this crazy shit.

AH: Was it your first visit there?
Ruben: Yeah our very first time and we’re trying to get everywhere. Our friend’s band I Wrestled A Bear Once – you’ve heard of them?

AH: Yes, yes.
Ruben: They’ve literally been almost everywhere in the world and I’m like “holy crap you guys have played everywhere!” They’ve played the jungles of Malaysia and that’s, that’s insane. I want to be able to play there too. Y’know what I mean?!

AH: Finally, which song by any band or artist best epitomises your life to date?
Ruben: Probably by Kiss ‘I Wanna Rock’n’Roll All Night’ and party all day. Ha ha ha ha! That’s pretty much it, that’s our lives. We go to a different place every time and try to make friends and make sure everybody’s having a good time and try to party and meet everybody. We’re always at the merch table, trying to hang out and drink beers and y’know have a good time.

As long as…I feel like that’s the thing that bands loose as..once you start seeing it as a job and being real bitter about it, it’s just a pay cheque for you, I think people notice that and we’ve always loved what we do. We’re very appreciative of everything that we get, so we’re always down to have a good time , to meet people and to party. You can ask fans, y’know they always party with us, they always find a way, they come with bottles it’s like “C’umon” so that’s pretty much our lifestyle right now. Enjoyng the ride and trying to keep it going, y’know what I mean.

AH: Why not while you can!

‘Red, White, Green’ by Upon A Burning Body is out now on Sumerian Records.

Upon A Burning Body links: Facebook|Twitter