Although the UK festival is full of great gatherings, one of our personal favourites is the 2000trees Festival. With a history of putting the spotlight on bands from the underground alternative music scene, 2018 is no different.

Taking place at Upcote Farm, near Cheltenham, 2000trees is jam-packed with impressive names. The influential post-hardcore Texans’ At the Drive-In, genre-crossing specialists Enter Shikari and Scottish alt-rockers Twin Atlantic head up the three-day festival which will include appearances from names such as Creeper, Turnstile, Touché Amoré, Hell Is For Heroes, SikTh, Basement and plethora of other names.

To get you prepared for a memorable mid-July weekend, the 2000trees Festival organisers have teamed up with seven of the best UK alternative music sites to preview seven outstanding acts from this years lineup.

To kick off 2000trees Festival’s 7 in 7, we spoke Murray Macleod of The Xcerts who are no strangers to the festival. 2018 will mark their sixth appearance at Upcote Farm, with this year making it a hat-trick for the trio.

Their spot on the main stage is sure to top off a memorable 12 months having launched their latest album, ‘Hold On To Your Heart’, last summer. We vividly remember a packed out tent singing back ‘Feels Like Falling In Love’, just days after its release. It’s just one of several memories The Xcerts have made at 2000trees; 2016 saw the band play their part in a marriage proposal.

Since then, they’ve been on the end of widespread acclaim of ‘Hold On To Your Heart’, whilst travelling all over the UK and Europe. As they had some rare downtime, we grabbed a word with Murray to talk all things for 2000trees.

AH: It seems 2018 has been kind to The Xcerts so far, especially with ‘Hold On To Your Heart’ getting a positive response?

Murray: Yeah, we’ve had a hell of a year so far. We’ve been on the road pretty much non-stop since last September up until now. The shows are continuing to get bigger as well as the love for the band. It’s a hell of a thing to physically witness.

AH: For the best part of the year, you’ve been touring throughout the UK and Europe but the festival season is fast approaching. Besides the obvious different environment and not always playing last, how does playing festivals differ from touring?

Murray: The potential to play in front of a lot of people who have never heard of the band is the biggest difference and a huge pro in regards to playing festivals. A headline show to me is a house party, a festival slot is a catwalk.

AH: This will be a hat-trick of appearances at 2000trees. Having played the festival several times, what is the attraction of the festival that keeps wanting you to come back?

Murray: Well, we feel very loved there by the festivalgoers and the organisers. Every single time we have walked out on stage at 2000trees it’s felt like everybody in attendance wants to see us succeed, they want to see us win. Being championed by that many people at a festival isn’t something we take for granted, we feel very very fortunate to be welcomed by what feels like a community more so than a festival.

AH: Does 2000 Trees have something that other festivals don’t have?

AH: Besides setting up a proposal in 2016, what are your favourite memories of previous 2000trees?

Murray: I have too many to recount. Singing ‘Free’ with Twin Atlantic is a hazy memory but a good one. I was absolutely hammered and they asked me 15 minutes before they played if I wanted to sing with them and I was like “of course!” They gave me a few beers to keep me company side stage before I walked out but they didn’t take into account I’d been drinking all day. My friends had no idea where I’d been for the past 4 hours because I ditched them to sit under a tree by myself to regain a certain sense of sanity.

I walked out on stage, my buds were in attendance, and apparently, they all started howling with laughter calling me every name under the sun. There was about 15 of them just losing it. Their dear pal, who could have been in deep shit, appears through a cloud of smoke to sing on the main stage. Thank you / sorry to my friends and Twin Atlantic. I love you all.

AH: You’re going to be stepping up to the main stage this year. Do you have any plans to make your set extra special?

Murray: We do indeed… but I can’t tell you what.

AH: With your fair share of experience playing 2000trees, do you have any tips for those bands playing it for the first time?

Murray: I would recommend immersing yourself in the festival. It’s such a great weekend and you’ll have the opportunity to hang with a lot of like-minded individuals and bands. Be cool, have fun, don’t jump in the lake.

AH: Who do you plan on watching over the three days at 2000 Trees?

Murray: We will only be there on the Saturday this year so I’ll be checking out Basement, Hell Is For Heroes, Bloody Knees and Enter Shikari.

AH: Finally, what essential items should all festival-goers be taking with them?

Murray: Baby wipes, a lighter, boxed wine, toothbrush and toothpaste. Lose your mind, not your teeth.

‘Hold On To Your Heart’ by The Xcerts is out now on Raygun Records. 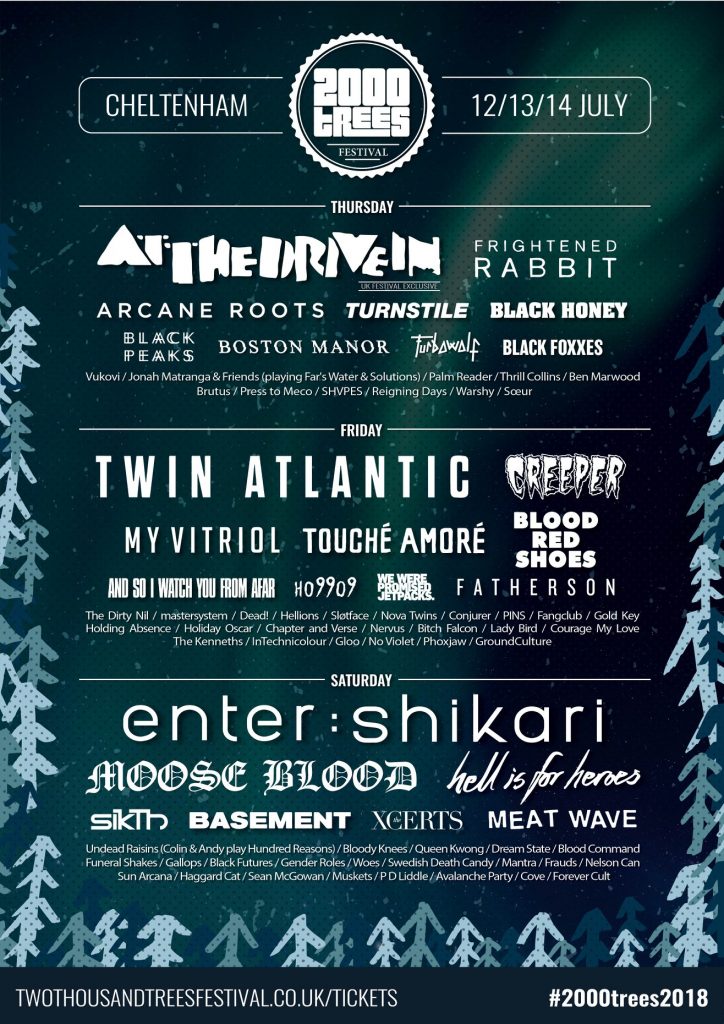