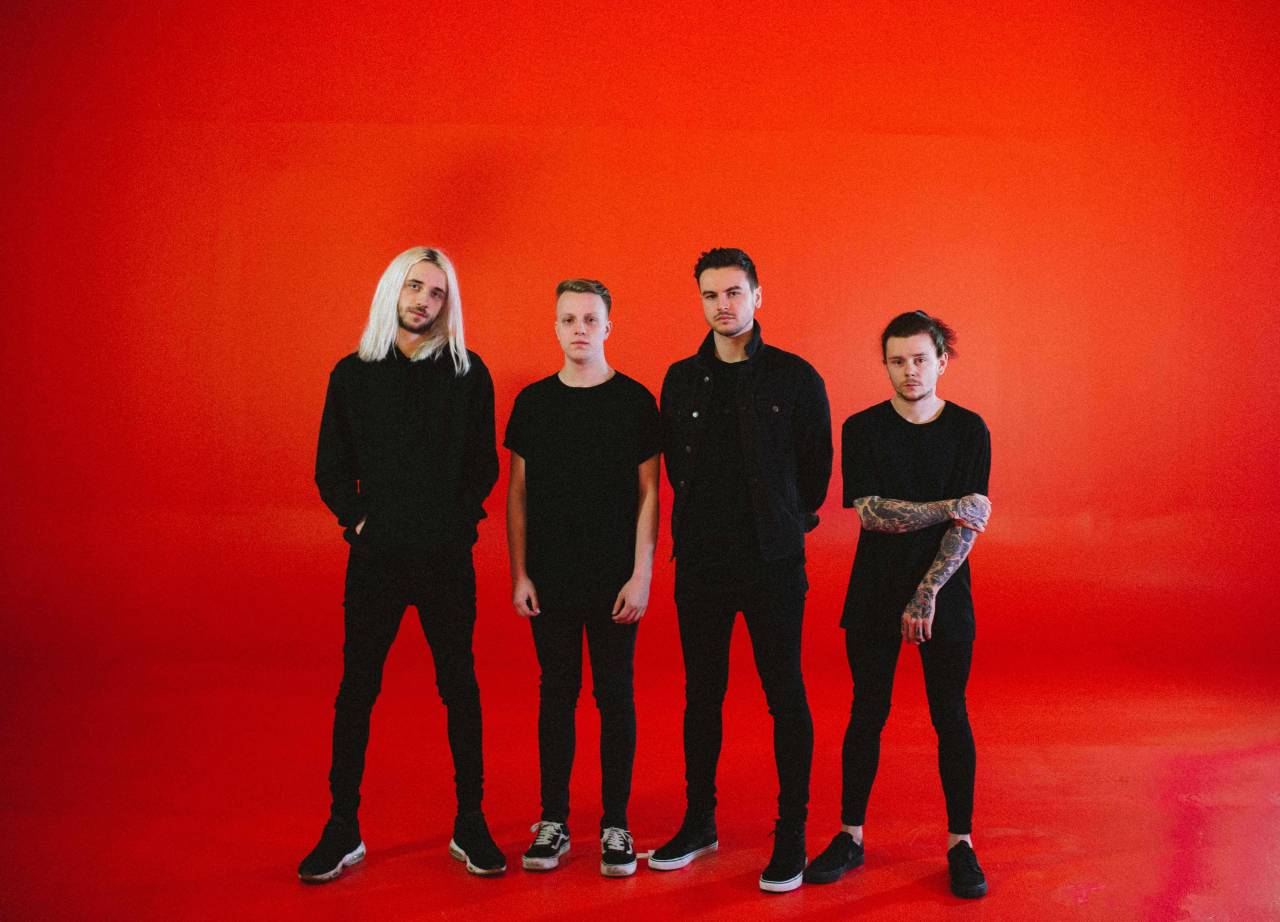 “It’s extremely easy to get caught up in the touring lifestyle… you forget about the person you actually are.”

Ever since emerging from Manchester three years ago, Milestones have had a lot of growing up to do in a relatively short space of time. Picked up by Fearless Records just 18 months into their time as a band, the quartet of vocalist Matthew John Clarke, bassist Mark Threlfall and guitarists Andrew Procter and Eden Leviston, have left their growing fanbase waiting for a debut full-length. Nevertheless, the wait is nearly over as ‘Red Lights’ is set to be released later this week.

Having toured all over America, Europe and the UK for the best part of a year and a half, ‘Red Lights’ is the result of a band who have grown as a result of lengthy spells not only on the road but also in the studio. “Whenever we’re on tour, we try to take as much away from the experience as we possibly can rather than just playing a show and then sitting in the green room and watching cat videos,” jokes Leviston as he explains the benefits of touring with the likes of Mayday Parade and Simple Plan. As the guitarist tells us, the latter had a major influence on ‘Red Lights’. “Mayday Parade was one of our favourite bands before we even got the chance to tour with them, so they definitely had a huge impact on our sound.” Leviston also mentions the band worked with drummer Jake Bundrick on a couple of songs.

As a young, up-and-coming band Levison and company used the opportunity of touring with experienced bands to observe and learn a new perspective as performers and as songwriters. “It’s matured us by making us realise that the basic bones of a song are the absolute priority,” says Eden. “Experimenting with guitar effects/samples is near enough impossible if you don’t have a versatile and compact set up on tour.”

From hearing the album, it’s clear Milestones are stirring towards an accessible pop-rock sound with comparisons to You Me At Six and Mayday Parade being made. While Clarke recently suggested that their 2015 debut EP, the pop-punk heavy ‘Equal Measures’, isn’t the band Milestones now are, Eden is thankful for the opportunities that EP brought the band. “I think it’s incredibly important to remember how much we’ve achieved so far and how that has allowed us to do what we do at the level that we do it,” says Leviston.

While the band’s travels have given them numerous opportunities, when it came to recording ‘Red Lights’, Milestones reconnected with producer Phil Gornell. Although they could have experimented, working with someone else, even overseas, the band found comfort working with Gornell out of his Steel City Studio in Sheffield. “We’re all incredibly good friends with Phil and I feel like he gets exactly what we’re going for musically,” explains Eden before adding, “at some point in the future, we’ll probably get around to experimenting with other producers, but we all feel Phil perfectly translate the ideas and vision that we have into the product we need, and then some.”

Leviston goes on to suggests Gornell’s methods benefitted the album, saying “if you could see the number of songs we’ve scrapped, you’d be shocked” before highlighting the producer’s ability to build character and allowing the band to patiently make ‘Red Lights’.

“Having such a long time allowed us to take a few days off every now and again, allowing us to come back with a refreshed mind, which proved to be one of the most intelligent decisions we had made. It’s so easy to get caught up in the moment when writing and working on it for the sake of it, even when you don’t feel at your most productive.

“This is definitely a bad move as you just end up waking up the next day and realising that what you created was less than average. It just allowed us to really get into a comfortable mindset and allow our creative minds to flourish. We’d all take it in turns to track by day so usually, you’d spend half the day relaxing and watching TV or reading or whatever and the rest you’d spend recording.”

Even though Milestones’ pop sensibilities are on show throughout ‘Red Lights’, lead single ‘Paranoid’ bridges the gap between their “rockier past” and “poppier present”. It flourishes with driving guitars and an insatiable hook, one of many that ‘Red Lights’ contains. “We realise that at the stage of releasing our debut album, it’s incredibly important to cater to current fans while mixing it up just enough to attract a larger fan base,” states Eden.

“Life isn’t simple and it never will be.”

While on the surface ‘Red Lights’ could make Milestones be seen as “just another pop-rock band”, it does carry a personal message of being the “best version of yourself”. As Leviston suggests, it’s an ethos that was spurred on by the band’s time on the road, “sometime’s it’s extremely easy to get caught up in the touring lifestyle, which is just night after night of insane adrenaline rushes. and you forget about the person you actually are.”

It’s no doubt that the four-piece have learnt some valuable life lessons and ‘Red Lights’ is the accumulation of their growth. With songs about problematic relationships to “sticking the middle finger up to people who doubted you,” Milestones stand up to the challenges they’ve faced in recent years, overcoming them.

“I personally just want ‘Red Lights’ to be an outlet that people use to escape from whatever hardships they’re facing,” says Eden as he defines what the album is about. “Whether that be at home, school, work or even within themselves. Life isn’t simple and it never will be. You’ll constantly be bombarded with difficult situations and sometimes you’ll face them head one and overcome them and sometimes you’ll fall flat on your face. The only thing that matters is that you carry on.”

‘Red Lights’ by Milestones is released on 23rd February on Fearless Records.