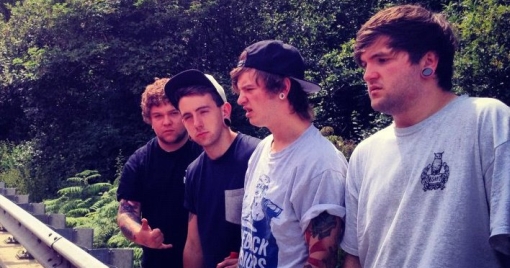 Napoleon hail from the Exeter region and are fast gaining a strong fan base and recognition on the hardcore scene, following the release of their ‘What We See’ EP over a year ago. Despite line-up issues, there is no rest for Napoleon and this year looks set to be a very busy one for the band with plenty of touring on the horizon and an album to produce.

In what was only their second ever interview, we stood in the back of another bands van and questioned guitarist Sam Osborn and bassist Ryan McEntee, whilst drummer James Mendoza went in search of a supermarket.

AH: The tour has been a long journey and is drawing to a close, what have you learnt from it?
Sam: That Europe is a lot better than the UK.

Both: A lot better.

Ryan: We’ve played shows in Europe to 350-400 people and it was like stage dive city, everyone was going mental.

Sam: Selling loads of merch every night and then we come here and sell on t-shirt and there’s like 20 people there.

AH: Riders are better there too aren’t they?

Ryan: Yeah! We were getting pasta and pizza, full blown meals and then we come over here and get stale bread, plastic cheese and processed ham. Thank god we came back to some better food.

AH: Any particular place that stood out for you?
Sam: Leipzig in Germany, there was like 450 people there. (Looks at Ryan for verification)

Ryan: Er, yeah. Leipzig was AMAAAAAZING, one of the best sets we’ve played to be honest. There were 350 people there and literally, they were just stage diving every single second of the set and were like little old soft arses, we play soft shit sometimes and they were going mental and I was just like “That’s all right then isn’t it.”

Sam: We went to loads of new places on this tour like Sweden so it was rad.

AH: We understand you are doing and exclusive vinyl release of your EP. Is this to coincide with Record Store Day? Do you think there is still enough of a market for tangible recordings?

Ryan: Well….you use big words on there.

Sam: Could you make them easy questions?

Ryan: I’m really stupid all right; I was in bottom set English.

AH: Did you get the first bit of the question?
Sam: Yes let’s do it in two halves

AH: The vinyl EP is that going to be for Record Store Day?
Sam: No. We are just going to sell it ourselves and do a limited number and make it quite special with new artwork and posters and stuff, because we’ve never sold the EP and people are asking for hard copies.

Ryan: Do them as hand numbered ones and make them quite collectable.

Sam: And do some CD’s as well.

AH: Spinning from that, do you think there is still enough of a market for hard copies of recordings like CD’s and vinyl?
Sam: Not nearly as much as there was, but I think a lot of people are in to collecting.

Sam: The collectable stuff, just not the standard CD’s.

AH: We understand you have another tour planned for 2013 with yet another American hardcore band, to be announced very shortly. What else do you have planned for 2013 tha tyou can talk about?
Sam: We are just working hard now on the album and hopefully track that in the summer and then hopefully tour as many new places as we can, hopefully try, if we can, to go to Australia, if not this year, we’ll get it sorted for next year. Eastern Europe, Russia and places like Hungary and Romania, stuff like that. Just go to new places.

Ryan: We just want to smash out a full length because we’ve been touring on the EP now for a year, which is four tracks and we got obviously the single and like, we’ve been touring long enough on that and we wanna write something a bit different than what’s been written now and everybody says that, but we don’t wanna be just straight up hardcore, we’ve gotta do something different. We want to make a full length that’s pretty long, not too long, but long enough, y’know what I’m saying.

Ryan: Twelve tracks something like that, but we want to make it decent enough to…for people to listen to it for a good couple of years and not fade away.

Sam: It has been over a year since we tracked the EP, so hopefully we’ve improved quite a lot since then.

Ryan: So looking forward to doing that.

AH: What were you like at school?
Ryan: I was a little shit. I got in so much trouble. I used to fight and slam people’s heads through railings and shit.

Sam: I’m not in any school photos or anything, they wouldn’t let me in ‘cos I had stretchers.

Ryan: In the last couple of years they wouldn’t let me in the school photos, but other than that I was. Well I was really short and bald and fat and I got bullied and then I started playing rugby at a high level and then people didn’t mess anymore and then I left school and became who I am now and people don’ give a fuck about me from school so it doesn’t really matter does it?

Sam: It’s not a waste of money, but the most annoying bit of money we spent is on our van, it just keeps failing MOT’s everywhere.

Ryan: We literally, before we came on this tour, had to pay a grand to fix this van it was fffffucked..

Sam: And we had a week to do that before tour.

Ryan: Literally well and truly fucked. We paid a grand and got a new starter motor in, a new handbrake because we broke it. We literally pulled the handbrake up one day and it went too far and we couldn’t get it back down so we had to stamp on it to get it back down, so we didn’t have a handbrake, for moths we were driving around with no handbrake. We’d park up on hills and just leave it in gear and hope for the best.

Sam: And we always lock the keys in the van and we’ve had to break into the van too many times.

Ryan: So we’ve spent a lot of money on that basically.

AH: What is your worst vice/habit?
Sam: Fast food probably, on tour, making ourselves ill.

Ryan: I dunno fast food yeah, but just being idiots. We’ve stayed up ridiculous amounts of hours. When we drove back from Sweden to Germany on this tour, we stayed up for like 15 hours and then got like three hours sleep and then played a show. And it is a habit of ours; we’ll get in the van at night and park up at a service station or wherever we’re going and we’ll sit down and be like “I’m knackered……what shall we do?” and then we’ll just stay up until like five in the morning and go “boys it’s five, we’ve gotta be up at nine, let’s get some sleep” and that is probably our worst habit. We get fuck all sleep when we are on tour, that’s why were like all dead.

AH: Are your parents supportive of your musical ambitions?
Sam: Yep.

Ryan: Yeah and no.

Sam: Yeah and no. Well yeah, we wouldn’t be on this tour right now if they weren’t, ‘cause they, because we had an expensive van bill that they’ve helped us out like, y’know find the money quickly.

Ryan: There’s that and whenever I’m at home, they be just “get a job, get a job, be a real person.”

Sam: They could have forced us to get nine to five jobs.

AH: Do they ever come and see you?
Sam: Yeah, my dad came to the show yesterday in Cardiff.

Ryan: Whenever we play Manchester, my parents come up.

AH: Where home and what is it like?
Sam: We all live in different place.

Sam: I live in a tiny town called Ottery St Mary and loads of places in Harry Potter are based on there, which is pretty cool.

Ryan: Yeah he lives in Harrypotterville. I’m from Manchester, from shitty rain city, so yeah I live on like a little council estate and like all my family live there basically. It’s like a proper community where I live, I’ve grown up in a proper community.

Sam: All your family live on the same road.

AH: They ought to rename the street after your family.
Sam: That bands pretty much based in Exeter, he comes and stays with us.

Ryan: I just go and live in [drummer] James Mendoza’s bedroom, with his parents.

AH: What makes you happy and what annoys you?
Ryan: Happy, food. I fucking love food, especially Macdonalds.

Sam: We find Maxibon cookies at some service stations.

Ryan: Oh my god, have you ever had a Maxibon cookie? Theya re like half chocolate with like crispy shit, chocolate and ice cream and it’s like chocolate chip ice cream and it’s like a cookie and we’ll be like walking through a service station going “oh this is shit, this is shit when we’re in France or somewhere and then we’ll open up the ice cream thing and there we are full on Maxibon cookies, boom, sorted and they’re like €2 and we did eat a lot of them. What annoys us? James.

Sam: James yeah. [all laugh] Sam: Probably James yeah, he’s like the biggest pessimist on earth, he moans about everything. Like literally just before we came on this tour, we got a fill in vocalist for this tour and before we came on it, James was like “it’s gonna be shot, he’s not going to be able to do it, why are we doing it? Why are we getting one?” and it’s like, because we trust him. He’s just a massive pessimist and it is pretty annoying on the tour, but we do love him.

Ryan: There’s probably him and our driver Chris.

Sam: We do get on pretty well on tour; we don’t really fall out on tour.

AH: Well you’re going to aren’t you?
Ryan: We bicker because we’re around each other all the time. We never argue, it’s like give it ten minutes, get over it, keep away from each other and after ten minutes everything’s fine, you’re back to normal.

AH: Which song by any band or artist would you say epitomises your life to date? Describes or encapsulates it, sorry if I’m using big words again!
Ryan: Yeah, honestly, I was in bottom set English for math…for English what am I on about, bottom set English and I was in a class with one of my best friends and all we did was punch each other in the face repeatedly though lessons, I didn’t learn anything, I don’t know any big words, but song…

Sam: Definitely at the moment, the song we listen to the most and is influencing us the most is ‘Quantum Flux’ by North Lane. I think their new album came out yesterday.

Ryan: Yeah that’s sick. Me? It’s probably the whole album by Dead Swans ‘Sleepwalkers’ that’s a dope album, that’s got some well good songs on there that explain a lot like ’20.07.07’, my favourite song ever and I’m getting the lyrics tattooed on me, I’m getting “It doesn’t matter how hard I scream, these songs won’t bring you back.” I think it’s just a sick lyric.

Sam: I don’t think we could just pick one song.

Ryan: We listen to so much, I’ve got like 400-odd artists on my Mac, I’ve got a 500gig Mac and it’s full, it’s just music and films, which I didn’t illegally download, I brought them all. 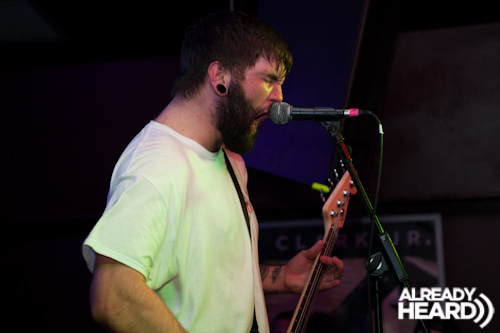 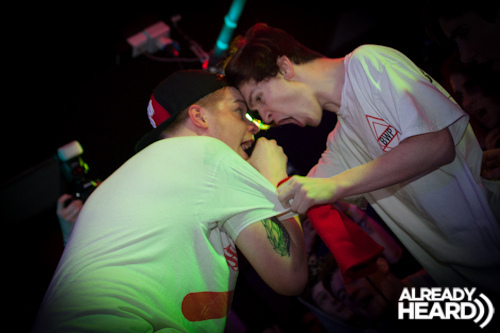 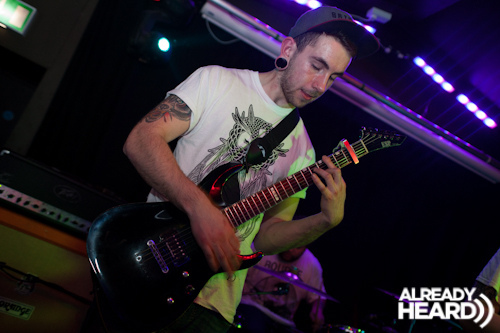 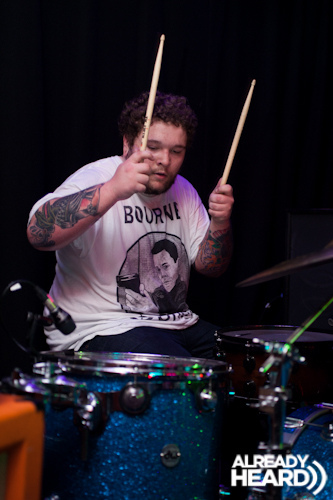