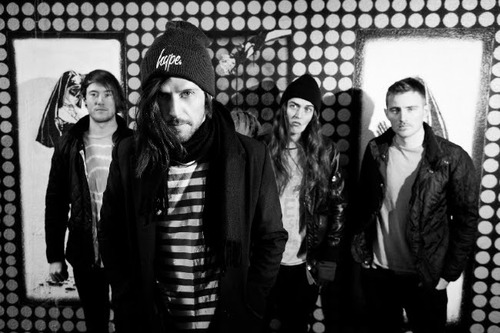 It’s safe to say Exeter quartet Idiom aren’t your typical metal band. As their latest EP, ‘Movement’ shows, the four-piece are a genre-crossing band that are willing to take chances with elements of rock, metal, hardcore and even rap. It’s no surprise then that Idiom’s influences include Rage Against The Machine, SiKth, System Of A Down and Deftones and have played shows alongside Bring Me The Horizon, Architects, (Hed)pe, and 36 Crazyfists.

What makes Idiom even more unconventional is that they have by-passed the typical method of releasing music through a label, and have opted to release three EP’s through Metal Hammer magazine throughout 2014, with ‘Movement’ being the first of those three.

With a whole load of UK dates planned to support the new EP, we had a brief catch up with guitarist Kris Gibbz to find out more about ‘Movement’, the next two EP’s, the bands diverse style and their future plans.

Already Heard: Hey. Can I ask who I’m speaking and tell us what you do in Idiom?
Kris Gibbz: Hey. You are speaking to Kris and I play guitar. Nice to chat!

AH: Let’s get straight to it. You’ve just released a new EP titled ‘Movement’. How would you sum it up for those hearing Idiom for the first time?
Kris: I would say ‘Movement’ is a diverse mix and each song is a journey and a feel in it’s own right. There are metal bits, dancy bits, songs you can sing along too and others where you can really go off in a pit!

AH: From hearing the EP, it seems to have a bit of everything; pop-hooks, melodies, breakdowns, a hint of nu-metal all wrapped in a metalcore ball. When you were writing the EP, wemhat was the initial goal?
Kris: Because of the diverse range of musical personality in the band it’s hard to not write music that can be a real mix, there was a conscious effort in this release to make each song stick out, rather than just bits of songs. But no goal as such other than to express ourselves as we do.

AH: The EP is set to be released online soon but it was recently released as a cover-mounted CD with Metal Hammer magazine. This is a pretty rare method to release new music. How did the idea come about?
Kris: The idea of the release online and through Metal Hammer is to have our music out there to as many people as possible. So we can play to as many people as possible and have amazing gigs where people really have a great time.

AH: How has the feedback been to the EP so far?
Kris:
The feedback so far has been great! Can’t wait to release more and write more!

AH: ‘Movement’ is the first of three EP’s that will be released over the coming months. What can you tell us about the next two EP’s?
Kris: The next releases will be a nice surprise… Many more individual songs that touch all the right places haha.

AH: How are the three EP’s connected? Are there any themes spread throughout them?
Kris: I suppose there is an enduring theme of pride in doing what you do, striving for a dream and never giving up whilst enjoying the whole damn thing too!

AH: Am I right saying there’s also an album in the works too? If so what can you tell us about that?
Kris: The album drops at the end of the year I believe but it’s a bit of a way off at the moment.

AH: You’ve recently started a UK tour. How has the new material been going down at the shows so far?
Kris: Tour has started well, new stuff is great, so fun to play but also we have our cheeky Alex Claire cover thrown in, as well as working on a new cover to spice things up!

AH: So with three EP’s, a possible full-length, and UK tour dates, 2014 looks like it’s going to be a busy one. Do you have anything else in the works?
Kris:
Yeah we want to tour more, not enough dates on the board yet but they’ll come! Busier the better for us as it’s what we love to do. Hoping some good festival slots pop up too!

AH: Do you have any final comments to close this interview?
Kris: I’d just like to say thanks to everyone who has ever watched, listened or supported us in any way, means the world! See you soon

‘Movement’ by Idiom is available to stream online now.