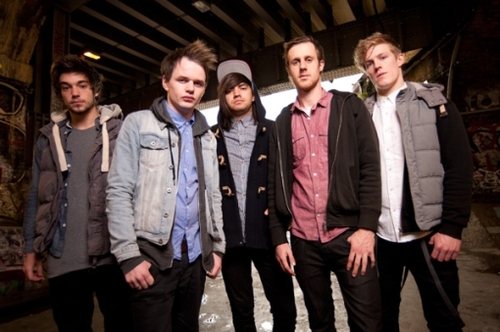 Since being crowned Red Bull Bedroom Jam winners last September, Exeter rockers I Divide have been working non-stop. From recording new material to touring with Funeral For A Friend, the quintet just completed a run of headline shows alongside fellow rising UK bands The First, Anavae and Underline The Sky before returning to record their debut album while they’re also set to play the Download Festival for the second year running next month.

With so much going on and so much to look forward to, we briefly spoke to drummer Dave Mooney to catch up with the band to discuss their first headline tour, how the making of their debut album is going, and playing Download.

AH: Since we last spoke to you, you’ve toured with Funeral For A Friend and released a CD sampler. How would you sum up the past few months?
Dave: These past few months have been the best so far for I Divide! The FFAF tour was unreal, every night we played to a minimum of 500 people and the reaction we got was incredible. The album sampler was also really good for us as it gave us a chance to show people what the new songs will be like and really got our album PR off the ground!

AH: After winning the Red Bull Bedroom Jam, you joined Funeral For A Friend for an extensive tour. How were those shows?
Dave: We had a great time on that tour, we met so many new people across the country who came down to show their support and we also converted a whole heap of new fans towards I Divide!

AH: You’ve just finished touring with a selection of up and coming UK bands – The First, Anavae and Underline The Sky. Why do you think more UK “undeground” bands are slowly getting more attention?
Dave: I think the whole UK music scene as a whole is growing within the “underground” section. As far as I can see a good handful of really good bands started getting noticed and this has spurred more to go forward and has since meant other bands get the tour supports etc.

AH: Overall would you say the UK rock scene is in a strong place right now?
Dave: I think it is in a very healthy state at the moment, which is good for us as a UK band, hopefully it will keep growing in solidarity!

AH: What places do you always look forward to playing on tour?
Dave: Two places we always have the best nights are Glasgow and Newcastle! For some reason the north always pulls through!

AH: Do you feel any pressure from headlining on that tour? Is it a new experience for you?
Dave: It was a new experience headlining and having a crowd that big, but in all honesty I don’t think we felt too much pressure. Our plan was to go out and smash it and hopefully we achieved that!

AH: Away from touring, you’ve been writing new material for your debut album. How has that been going?
Dave: We have indeed, as it happens I’m actually sat in the studio doing this interview right now! I finished all my drums yesterday in one day, which was nice! Today we start on bass , then we have another 3 weeks here to finish everything. We’re here at Outhouse studios which is a place we love, the atmosphere is great, we get all the freedom in the world and there’s even a hot tub!

AH: Can fans expect to hear a preview of the album on the tours?
Dave: They can indeed! Recently we’ve playing a few new numbers at shows, we’re still playing a wealth of the hits too though!

AH: Following this run of shows, you’re set to play Download for the second year in a row. How does it feel to be playing the festival again?
Dave: We honestly can’t wait for this one, we’ve managed to get onto the second stage! It’s going to be great fun for the other guys having all that room to run around on during the set, we’re hoping for some great weather to go with it!

AH: This time round you’re playing a bigger stage. What can festival goers expect from I Divide?
Dave: A very high energy set with lots of bounce!

AH: Do you have any final words for Already Heard readers?
Dave: Thanks a lot for reading this and we hope to see you soon!