Interview: I Am The Avalanche 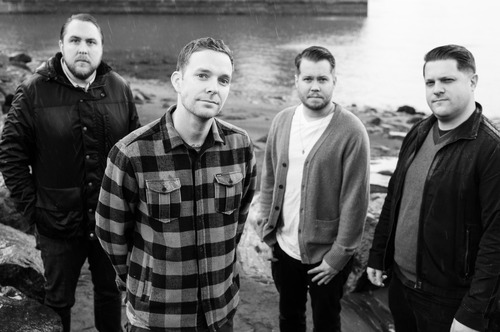 I Am The Avalanche have gone beyond being Vinnie’s new project, and are now a thoroughly respected band and a regular fixture on all the best festival line-ups. They’re touring the UK in support of their superb new full length ‘Wolverines’, an album which the band feel represents their strength and determination.

We caught up with vocalist Vinnie Caruana and drummer Brett “The Ratt” Romnes before their show at Nottingham Rock City to talk overcoming their worst fears, playing shows with their heroes and breaking into new musical territory. Just don’t mention The Movielife!

Already Heard: You’ve been on tour for a few shows already. How’s it gone so far?
Vinnie: They’ve all been good! I’d say London was the craziest. And Milton Keynes was really spirited.

Rat: Everyone was vibing out really hard there!

Vinnie: The vibes were super-positive. It felt like a family vibe.

Rat: We also came from Europe and did the Groezrock festival.

Vinnie: Groezrock was insane. We got to play with Descendants and NOFX. It was like a day after we flew in, so the first show; we just had to go right at it.

AH: Your new album is called ‘Wolverines’. Where did the name come from?
Vinnie: A wolverine is an animal that perseveres and has a lot of heart. It’s the kind of animal that will chew its own leg off if it’s stuck in a trap and attack you with a bleeding nub. It’s something I admire and that I can equate to this band still existing. The guys that are still in the band from the very beginning are wolverines.

AH: Has it been tough to keep the band going?
Vinnie: The band’s gone in so many waves throughout the years. We’ve done three full length records, which isn’t enough in my opinion. We’ve had breaks where we didn’t know if we were going to make another record. It’s never easy for any band, successful or not, to keep it going. We might not tour for 18 months in a row, but it’s a really important part of our lives.

AH: You’ve been announced to play Riot Fest which you must be stoked about…
Vinnie: Groezrock was the sickest line-up I’d ever seen – and now this beats it. As far as festivals we’ve ever been a part of, this is NUTS. We’re talking about some of my favourite bands ever, and not just punk bands. There’s like ten bands at that festival that are in my top twenty of all time.

Rat: It’s pretty flattering actually. We saw a direct result of our hard work. It’s not like, “Ohh my booking agent knows this guy so he’s going to get us onto the show”. Riot Fest came to our Chicago show and were like, “let’s see what you got”. We played and then we got the call up to the big leagues! We’re really pumped about it.

AH: That’s the kind of impression you get about the guys who organise Riot Fest.
Rat: Those guys are very hands-on. They hand-pick all those bands.

Already Heard: Your new album isn’t as easy to pigeon-hole as say, The Movielife. Do you feel like being in this band gives you more flexibility to play shows outside of a certain genre?
Vinnie : Absolutely, one hundred percent. Especially with a new record. Now we have three so there’s more of a spectrum. I think we’re able to thrive at a hardcore show – depending on the kind of hardcore you’re talking about.

Rat: We did play with Madball the other day.

Vinnie: We played straight after them in Munich. The stages were staggered, so it was one straight after the other. They went off all, “OK GUYS WE’RE MADBALL, SEE YA LATER”, the sickest hardcore band out of New York…and then boom: I Am The Avalanche! “We’re also from New York –we’re nothing like those guys!” That show actually put some hair on our chest and some perspective into our band. We can get involved in a lot of different kinds of tours and festivals and appeal to a lot of different kinds of people. We’re one of those bands that can transcend a few of those boundaries.

Rat: I wouldn’t say we’re just a punk band or just a rock band. It’s somewhere in the swirly world between them.

AH: Vinnie, you wrote the album during a serious back injury – a dark time in your life. But the record as a whole actually seems pretty upbeat. Which way would you say it leans?
Vinnie: It was written in a dark part of my life, but the overall theme is rise above this and overcome. When the doctor told me what was wrong I got in the car and burst into tears. I thought I wasn’t going to able to be in a band, and I was going to have to get a new job where I sit at a desk. That would be death for me. I fell apart at first and then maybe a week into it I thought, “How do I combat this? How do I make things better?” I couldn’t get out of bed without the use of hard drugs which I can’t stand. Those aren’t my kind of drugs. I like my beer and my whiskey and the occasional spliff! I was trying to clear my mind so I could write lyrics, and when that was happening I was in extreme pain. The pain was a driving force and inspiration to make it.

AH: It must be great to look back on an album as something that actually got you through a dark period.
Rat: Music is cathartic for everyone. A sad song is supposed to make you feel happy, just like a Shakespearean sonnet. It makes you feel like your life isn’t as bad as it was or could be.

AH: Do you feel like you’ve got past the stage where you’ve shaken the Movielife tag and you’re not constantly associated with them anymore?
Vinnie: It always seems to be attached to us. Even now I’ll read a magazine and in the lead paragraph you’ll see “Movielife”. I’m not going to fight that: I’m proud of those days and that band is special to a lot of people. But it’s also very romanticised. On the last Movielife tour there were probably about 200-300 people at the shows, which is great for any band. When we reformed we had 2000 people at the shows! If someone yells a Movielife song at us on-stage, it’s not cool and I’ll let it be known that it’s not cool. That person could easily be removed from the venue. It’s usually that guy who didn’t get enough attention from his parents.

Rat: It’s more like hecking, or just coming out and being a dick.

AH: What are the best things about coming to the UK for you guys?
Vinnie: The reception our music gets here is great. They seem to understand the moving progression that our records have. I think they connect with my lyrical approach. It never gets boring, coming over to a foreign land and having people support you. We’ve always had a deep connection which started with The Movielife, and now three records in with The Avalanche, we’ve been here on countless tours and I come over here playing solo shows without the band. I don’t want there to ever be a day where we can’t come here because no one will come to see us. We’re playing small clubs, but we’re loving it.

Rat: There’s a lot of bands from the UK that we all grew up on. It’s a big part of our musical history.

Vinnie: You could definitely call me an Anglophile. I sweat English culture and English music. Aside from my family and friends…and my girl…Liverpool Football Club is number one for me.

Already Heard: We have to ask you about that obviously! What did you think of the end of Liverpool’s season?
Vinnie: None of us expected to win the league. We would have been happy with fourth. We wanted Champions League football back in Liverpool and that’s what we got. About a month left in the season we got a taste of what could have been. I’m sad for Stevie as I think he deserves the title. I hope he gets one before he retires, but I think he’s only got a few years left in him. I’ll be back next year to watch a match for sure.

AH: You posted something on Twitter today about Travelodge UK – what happened there?
Rat: Fuck that place!

Vinnie: We’d been staying in Travelodges every day, which sometimes is OK depending on who’s running it and how new it is. Last night we had the worst experience. We turned up at an empty Travelodge with rooms we booked three months ago, and they said they had nothing available. Sleep is so crucial to us on these types of tours! They relocated us into two different hotels on opposite sides of town from each other, splitting up the whole group. In our hotel, the shower didn’t work. The room smelt like someone had taken a shit in a dentist’s office. The comforts of home were not there.

AH: Can you tell us a bit about the tour support bands?
Vinnie: We wanted to have a band from the UK on the tour. Our manager presented me with five different bands. Moose Blood was the first band I listened to and I put on their song ‘Boston’. Halfway through I called her up and said “Moose Blood – let’s go”. Turnover is a band from Virginia Beach. They’re on Run For Cover Records, a well admired label who I’ve worked with on my solo material. They’re a young band making really smart tunes, and that was an easy choice. Major League were recommended to us – I’d played a few shows with them when playing solo gigs and we wanted to share the stage with them. I watched all the bands last night in Milton Keynes, and looking around, I noticed everyone knew the songs to all these bands.

Already Heard: Thanks very much for your time guys, and best of luck with the rest of the tour.

‘Wolverines’ by I Am the Avalanche is out now on I Surrender Records.

I Am the Avalanche links: Website|Facebook|Twitter