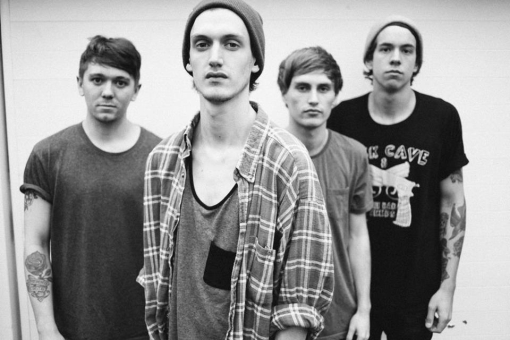 For Welwyn Gardens’ post-hardcore quartet Heights their second album, ‘Old Lies For Young Lives’ marks a new start for the band. Not only is it the bands first with Alex Monty on vocals after the departure of Thom Debaere last year, but also sees the band heading in a new direction.

‘Old Lies…’ sees them shaking of the shackles of their Hardcore roots with a more varied sound that has the potential to reach a wider audience, whilst lyrically the band have matured and takes you on a journey of adolescence and discovery.

Vocalist Alex Monty spoke to Already Heard to discuss how the line-up change affect the writing of the album, how ‘Old Lies…’ is a departure for the band, working with Architects’ Sam Carter and much more.

AH: ‘Old Lies For Young Lives’ is your first release with yourself vocals. How did the change in line-up affect the making of the album?
Alex: Probably not as much as you’d think. Thom used to write all our lyrics, and now that’s done between me and Dean (Richardson – guitarist.) Other than that, the writing team is exactly the same as it was on our last release of ‘These Streets / Gold Coast’ singles.

AH: Was there any changes in the way you wrote songs?
Alex: Not massively. I mean, the end product is very different from ‘Dead Ends’ and even ‘These Streets,’ but it’s always been our goal to write music that we love and that’d we’d want to hear from an album.

AH: With your first album ‘Dead Ends’ receiving tons of praise from critics and fans, did you feel any pressure when it came to recording ‘Old Lies For Young Lives’?
Alex: In a strange way no. This is my first album with Heights so I didn’t even really think about ‘Dead Ends’ while this was being written. I think, for the other guys, this feels like a brand new band now. For a while we would say stuff like, “can we do this? Is this Heights?” But then after a while we just said, “fuck it, Heights can be whatever we want it to be, let’s do whatever the hell we like.”

AH: Is the new album a departure or a continuation of the first album?
Alex: Definitely a departure. Never write the same album twice. Some criticisms of ‘Dead Ends’ said that it was good, but not particularly varied as an album. I think ‘Old Lies’ could be seen as a reaction to that statement. I don’t think you can call this album unvaried.

AH: I understand the album is more structured and not just a set of songs put together. How are the songs connected? Is there a lyrical theme running throughout?
Alex: Yeah we really believed in creating an album, something to be listened to from beginning to end as a whole piece. There’s a sort of journey, with each track taking you to a different place, and even the gaps between tracks have been thought over and timed to exactly how long we wanted them to be. The main lyrical themes are about growing up, being lied to, seeing the world for what it really is as you leave adolescence and enter the real world, death, insomnia, depression. You know, it’s a real feel good album.

AH: Lyrically what has influenced the record?
Alex: Our lives. There’s something on this album that most people can relate to something in their lives. As we’ve grown up a lot, especially in the time this album was written, and matured as song writers and musicians, we sort of drew inspiration from that and wrote about realising how different and basically fucked up the world is that’s hidden from you when you’re younger.

AH: You recently released the first single from the album – ‘Eleven Eyes.’ What was the song about and why did you pick it as the first single?
Alex: ‘Eleven Eyes’ is one of the more “social commentary” influenced tracks from the album. It’s about being sick and tired of the world we live in that constantly seems to be run by the wrong people with a very closed mind set. It’s about feeling different and isolated from everybody around you and having nowhere to turn from all that bullshit. People have geared it towards politics, because I guess that’s the easy one to pick and say “people think that’s unjust! If you’ve written a song about inequality it must be about that.” But really, it can be applied to anything. Bigoted religious leaders, practicing out of date ethics. Getting taught bullshit in school. Whatever.

AH: It also features guest vocals from Architects’ Sam Carter. How did the collaboration come together?
Alex: We toured with them for the first time back in December 2011, and all of Architects are some of the nicest guys I’ve ever met, inside or outside of music. We asked Sam sometime around then / early 2012 and he was stoked to be a part of it all, which is always a positive. He didn’t just come in, track his parts and fuck off, he got really involved in the whole process and really left his mark on it.

AH: When it comes to taking the album out on the road, can we expect to hear the album be played in full?
Alex: Definitely. We did a ‘Dead Ends’ show this time last year. We’re definitely gonna do an ‘Old Lies’ show, and play it from beginning to end. Not sure where or when, but we’re gonna do it and make something special of it for sure.

AH: This summer you’re set to play several festivals. What are your thoughts on playing festivals and how does your set differ to a regular Heights show?
Alex: Most of our normal shows are about the same set length as festivals, and we don’t have a massive back catalogue of material to choose from just yet, so the sets are usually quite similar. We love playing festivals though. It’s always good to play in front of festival crowds because there’s such a large mix of people. We’re playing Slam Dunk in May next to bands like Mallory Knox and We Are The Ocean. So you get a huge mix of fans as well. And just generally way more people. It sucks when you clash with a good band you want to catch though.

AH: Besides playing festivals, what are your touring plans for the coming months?
Alex: Our touring plans mainly consist of festivals, so not a lot else to talk about… Sorry! We’ve still got more up our sleeves though, so keep an eye out for them. And of course UK and Europe will definitely be getting toured pretty hard later in the year…

AH: Do you have any final words for the Already Heard readers?
Alex: Our new album ‘Old Lies For Young Lives’ is out on 29th April and you can pre-order it now from www.oldliesforyounglives.com. Come see us play at some festivals this summer and maybe I’ll jump on your head or something.

‘Old Lies For Young Lives’ by Heights is released on 29th April through Transcend Music.