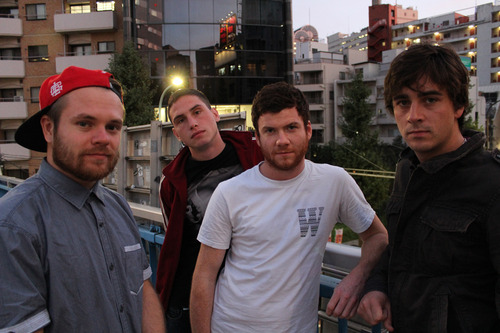 It’s safe to say Enter Shikari are veterans of the Reading and Leeds Festival having played there repeatedly over the last eight years. For the most part, 2014 has been a quiet year for the St Albans quartet. However, having just returned to the UK after four weeks on the Vans Warped Tour, we caught up with Rou, Chris and Rory from the band at the Leeds Festival.

We questioned them on which is better – Reading or Leeds, and we also asked them a bit about their upcoming fourth full-length.

AH: To begin with can I get your names and role in the band?
Rou: Hello I’m Rou. I shout.

AH: So you’re back at Leeds for the sixth year running?
Rory: I don’t know anymore.

Rou: I saw somewhere someone had wrote seven out of the last eight, so that makes sense.

AH: What is it about Leeds and Reading that makes want you to come back again and again?
Rory: They keep asking us.

Rou: Yeah. It’s an institution. It’s THE festival, it’s just the one. The line-up is always so diverse which we absolutely love. We never really feel at home on any bill but like the diversity of the Reading and Leeds bill is just incredible.

Rory: We’ve very much at home.

AH: What has been your favourite year?
Rou: I’m really enjoying this year so far.

Rou: I actually made a point in the set yesterday where I made sure I stood and looked out and took it in, instead of getting with it. It just becomes a blur if you go on and don’t think about it. That was good. I really enjoyed the set.

Rory: I think every year is good in the same way, so it’s hard to pick one.

AH: I’m going to put you on the spot, which do you prefer Leeds or Reading?
Rory: It’s got to be Reading, it’s the one we went to as kids. They both have there pros and cons I think. Leeds would be awesome if wasn’t for the weather but it kind of makes it a special vibe because people don’t give a shit, and are in that festival state of mind, which makes it better in a way. It makes it more communal, and everyone is in it together.

AH: What advice would you give to new bands playing the festival?

Chris: I don’t know really. Just do what we do, play hard. Just enjoy it. It sounds cheesy.

Rou: We do whatever we do at a club show.

Rory: Yeah if you keep it in that mind frame that its not any different even though you’re probably shitting it.

AH: You’ve been away for awhile working on the fourth album. How has that been going?
Rory: Really well. Successful.

Rou: We’re in the very final stages of mixing. Then we’ve got to master it and think of a title, then artwork. We should be announcing the release date along with a February UK tour pretty soon.

AH: What can fans expect in terms of sound and songwriting on the new album?
Rou: It’s just as diverse as ever really. We pushed ourselves again. There’s a lot of concentration on texture. We’re massive fans of melody and rhythm but this time we’ve really concentrated on texture this time. There’s a lot of orchestral instrumentation as well which is really fun to record and write for. It’s got some of our heavier stuff and some of the most delicate stuff we’ve ever done, so it’s a nice mix.

AH: It sounds interesting. Have you got a release date you’re aiming for?
Rou: Just January.

AH: Going back a few months. You’ve been on Warped Tour. How was that?
Chris: It was fun. We were a bit nervous going over there because we did the full thing last time and it got a bit long, but this time we had a lot more fun than we thought we would. All the shows were good.

Rory: Saw some good bands and made some good friends.

Rou: They’re (Warped Tour) are on in car parks.

Rory: I did some rough maths earlier and I figured the amount of people we play to are the four weeks of Warpd Tour we did is the same we did to yesterday at Reading. Four weeks work into one day.

Rou: So much easier.

AH: Is it quite testing being on Warped Tour? I hear alot of stories about all the travelling and weather conditions.
Rory: I was dreading it. I don’t do well in hot weather. I’m made for overcast like today. But the weather was actually really good this year. I can’t believe we’re talking about the weather. (laughs)

Chris: It was the coolest weather they’ve had in years apparently.

Rory: I think with Warped Tour, if you go into it with the right frame of mind, then you’re going to have a better time. I think because we had done it twice before we knew what to expect.

Rou: It ended up being one of the most fun tours we’ve done in a long time.

AH: In terms of crowds, how does the reaction from US fans compare? Is it any different?
Rou: It’s quite similar all around the world.

AH: Any final comments you want to share with Already Heard readers?
Rou: Big love to anyone who has given us support and hopefully they will enjoy the new album as much as we do.