Crywank: Reflecting On Their Turbulent Career 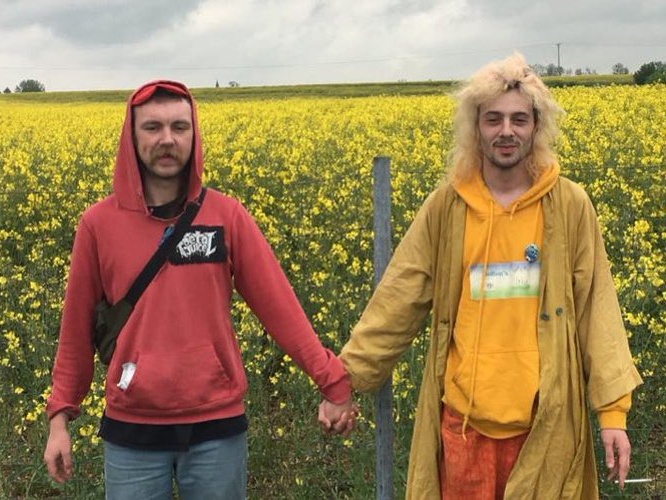 When it comes to melancholic music, some listeners can forget that there’s still plenty of humour to be had in the art of self-depreciation. James Clayton started Crywank in 2009 in the depths of Manchester, armed with two chords and the intention of being the most “pathetic bedroom acoustic musician” that they could think of. Their best friend Dan Watson joined not long afterwards in 2012 as their full-time percussionist.

On the likes of Deviantart and Tumblr, there are thousands of illustrated interpretations of what their lyrics mean to Crywank‘s polarising fanbase. From the most insightful quips of misery to blatant statements like “I am shit, na na na na fucking dick” there’s a clear resonance with Clayton’s honest songwriting style across the internet.

Clayton says they constantly have mixed feelings about where this project has brought them in life – and the legacy it will leave behind. “I’m incredibly proud of what I’ve done, but there have also been points where I wasted so many opportunities. I’ve been trying to get to America for the past seven, eight years, I have still not managed it, “ they tell to Already Heard before their 10th anniversary show in London. They continue: “The band can sometimes represent my own failures as well.”

While their name has hindered opportunities for them to truly break out of niché music circles, Crywank has over 25 million streams on various platforms and have toured around the world without a manager or a label to consistently back them.

Early in their career, Clayton was often told they wouldn’t get very far with such a provocative name. Certain venues refused to book them despite their growing popularity, even when bands such as Fuck Buttons could perform to large audiences. Yet the term by its very nature is tragically pathetic and shocking enough for the average music fan to listen out of sheer curiosity.

“Recently the police got involved over our band name and the band The Menstrual Cramps. They asked the venue to censor the words ‘crywank’ and ‘menstrual.’  Sure, one is used in PG films, but maybe with the crying beforehand, makes it a bit more intense.

Menstrual is definitely not a word that should be censored. To even suggest that it should be is completely bizarre to me. We decided to change the venue rather than censor ourselves and the show still went ahead.”

Clayton even had a go at writing two albums under different monikers – JC and the Nobodies, as well as Langdon Alger, a concept album based on an obscure, off-screen Simpsons character that has an intense crush on Lisa. For now, it looks like the name Crywank is here to stay.

At its core, Crywank is an “anti-folk” project, yet their influence transcends into further DIY circles of emo, folk punk and quirky shades of psychedelic lo-fi. Their most well-known songs, ‘Song For A Guilty Sadist’, ‘Memento Mori’ and ‘Welcome To Castle Irwell’ has resonated within the depths of internet sad boy culture. The song ‘Privately Owned Spiral Galaxy‘ was once sampled by the late controversial rapper XXXtentacion, despite never receiving royalties for it.

“At the time no one knew who he was. It was just bizarre watching someone who sampled us, go on to become so big. There was a point shortly after he died, I went to Spotify and he was the 10th most listened to artist in the world that week,” comments James when discussing the sample. Clayton was vocal online about being unhappy with being sampled given the unfortunate association of their music with an abuser.

After X’s death, they were flooded with messages from fans celebrating his death, which didn’t settle well with Clayton. “I’m obviously not happy that anyone is dead. I’m sad that he never got to hold himself accountable and heal. It made me feel really weird.”

Their latest album, ‘Wearing Beige On A Grey Day,’ continues the absurdist journey set in stone by 2017’s ‘Egg on Face. Foot in Mouth. Wriggling Wriggling Wriggling.’ The route that James and Watson have taken isn’t simply just abandoning the self-deprecating quips, but exploring topics such as callout culture, DIY politics and finding it hard to stick to values when the world of identity politics is constantly changing.

Their sound has evolved from slow acoustic jams into often whirlwind tales, laced with abrasive horns and punk drum fills to be more playful. At times it even feels like a blissful fever dream, capturing the frantic mindset of two musicians with wildly unpredictable touring schedules.

On reflection of what Clayton’s favourite album is, they acknowledge that their cherished internet breakthrough ‘Tomorrow Is Nearly Yesterday And Everything Is Stupid‘ is a product of how they felt at the time of writing. To date, it remains their most popular and recognizable album in their discography.

“I wrote that record at a point where I was naive, but learning,” they explain.“There’s an energy on ‘Tomorrow Is Nearly Yesterday’ which I don’t think I could ever be able to recapture now.

Given that Crywank resonates so much with young music listeners that often struggle to find ways to express themselves, Clayton always finds it humbling when fans tell them that they’re the reason they picked up a guitar or started booking gigs for friends.  Yet there are also attendees of their shows who are surprised when Clayton isn’t a perpetually depressed, Elliott Smith type figure in person.

“Some people have asked me ‘Do you put on your depression?’ You’ve come to see me play and sing these songs, and you’re going to accuse me of putting on my depression!? I think it’s because I am way more flamboyant than people expect. People forget that we’re called Crywank for god’s sake!”

They elaborate: “I joke about it as a coping mechanism. When I had ideas in my head for lyrics which became ‘It’s Okay, I Wouldn’t Remember Me Either,’ I remember thinking; ‘Oh, my God, that’s so pathetic. I suck so much. I’ve got to write that down’.

“A lot of what I write in Crywank comes from an emotional place, but it’s not as if through the process of sharing I have no self-awareness of how overdramatic or funny it could be read as.”

There have also been speculations throughout their career that Crywank is a satire on the tortured artist trope. Clayton is quick to dismiss this, rather that they have found humour through melodramatic forms of sadness.  It isn’t intended to be a satire of other people but often a disparaging deconstruction of themselves, consciously sharing the parts which are overdramatic, reflect badly on them or are just weird.

Ultimately, Clayton does not see their music as a parody of the sad lo-fi genre by any means, but more like a reconciliation of ‘privileged depression’ which is always up to consumer interpretation.

Admittedly, tonight is perceived by Watson and Clayton as more of a gift to their fans rather than for themselves. Despite hinting that the project may be over in the near future, Crywank have another album in the works, as well as returning to Australia for what remains of 2019. Notwithstanding their reservations about how much this project has consumed their lives and economic stability, the hour and a half set that spans over their six-album career is an emotional rollercoaster, with fans lingering on to their every word and chanting “10 more years! 10 more years!”

It’s never been made clear how long Crywank intends to carry on, given that it has taken up a third of Clayton and Watson’s lives, but so far we’ve been blessed with a bountiful discography. Watson admits on stage: “We argue all the fucking time, but in the end, we still love each other.”

‘Wearing Beige on a Grey Day’ by Crywank is out now.