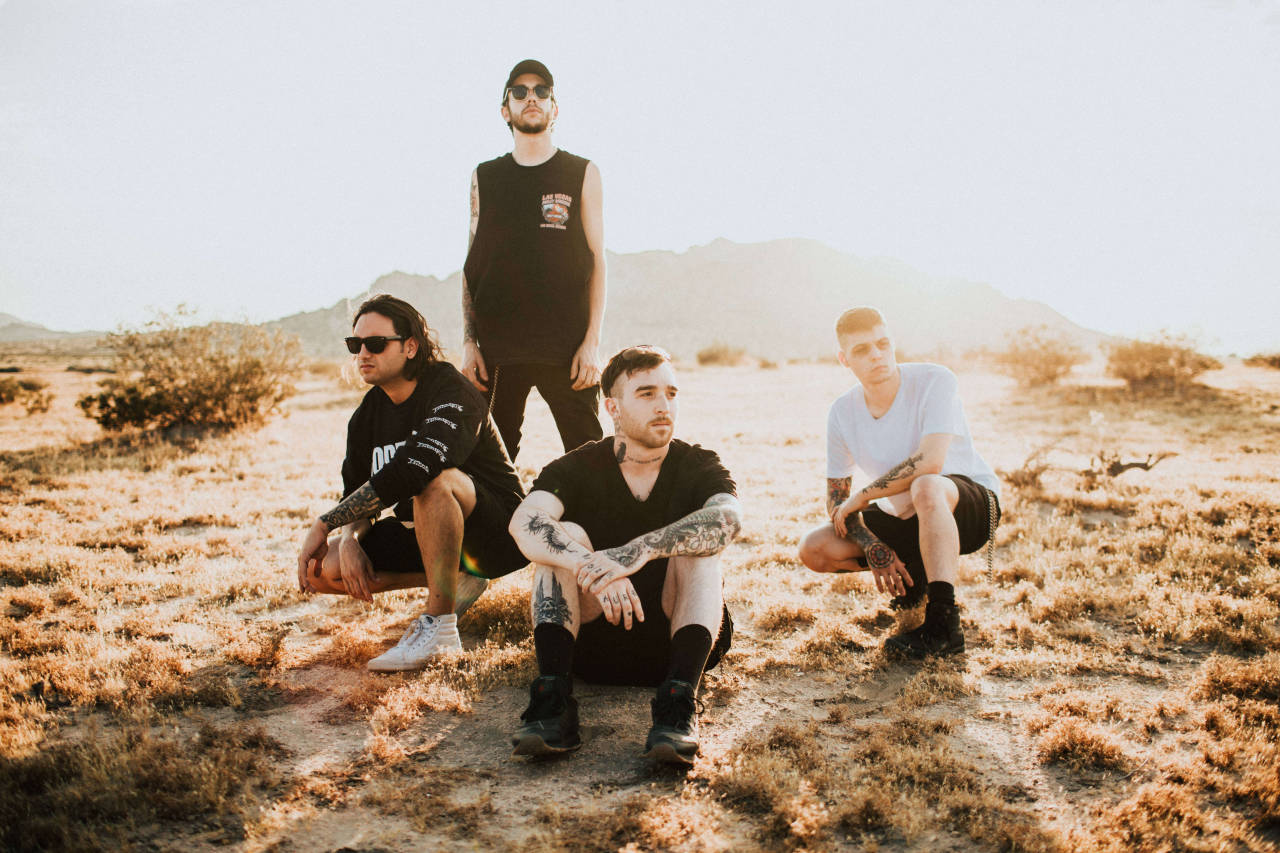 “When everything is dying, you have to evolve and adapt.”

“It’s way better than anything else we’ve put out,” proclaims Cane Hill frontman Elijah Witt as we catch up with him in London ahead of supporting Motionless In White. With their second album, ‘Too Far Gone’, seeing the light of day six days ago, it’s clear Witt has been caught somewhat off guard by its reaction.

While their setlist on this current run has contained an even mix of old and new material, it has surprised Witt and his bandmates with amount of people singing along to the new songs. ”It’s been weird. We didn’t expect anyone to know the words,” states Elijah before reminiscing about a previous UK visit. ”We just figured it would be like the last time we came over and everyone’s just staring at us dumbfounded.

”’Smile’ got a decent reaction; the (‘Cane Hill’) EP got a really good reaction. But this one somehow surpassed both of them together. I think, as far as I can tell by social media and people in the crowd,” states Elijah.

Their new material has displayed just how far Cane Hill are able to stretch and develop their own musical style. On that note, Witt expresses “I don’t think we’ll ever find our final sound. I think it’s an ever-evolving idea. If we became stagnant or static with our evolution, it would become boring.” Looking back at their earlier material, Cane Hill was proclaimed as the pioneers to revive nu-metal with hard-hitting breakdowns and angsty vocals. Since their first EP, they have taken that initial concept and ran with it by asserting their broad spectrum of metal into their dynamic sound. ‘Too Far Gone’ has put the band on a path towards a more personal and broadens tone with hints of 90s grunge rock and thrash.

In regards to the making of ‘Too Far Gone’, Elijah spoke to us about the production and conceptual ideas behind the album too. He explained that with ‘Smile,’ the songs were created in the studio for the most part, as they only went in with two or three riffs written. “This time, we had four to five months off at home where we tracked the majority of the album out before we scrapped about ten of those. This one was just more methodical and more planned out.“

There is also more than meets the eye with the album artwork used, which ties into the music video concepts. “The Mosquito is the unofficial state insect of Louisiana because we have too fucking many every season,” says Witt. He goes on to reveal “the goo is essentially our thoughts and ideas being sucked by the mosquito. So, we’re the Mosquito, and the goo is the drugs and the mistakes and the limits that we pushed, being sucked into us.”

Taking this interesting and thoughtful artistic concept with the artwork into the music video for ‘Too Far Gone’, Elijah discloses more about how that came about. “We had a mosquito drawn out for an album cover we didn’t use, by our friend Aaron Marsh, and they animated it and it all came to fruition very conveniently being similar to the album.” However, the first draft didn’t go exactly as planned. He says that originally what they were first sent “was like an acid trip where you would see demons, and we were like no, that’s not what we saw, that’s not what we want”. Elijah’s eyes lit up as he explained what they really wanted, “we saw a lot of pretty colours and started losing our minds, so we sent that back to them and they were like ‘we got it, GOO!’”. To sum up the ‘Too Far Gone’ video in his words – “Throwing up colourful goo, 100%!”

This contrasts with the music video for ‘Lord of Flies’, which features inserts of strangely disturbing close-ups of insects etc between warped video footage of the band themselves. “For that one, we made sure we still threw in colourful things like the pastel paints and all of the background imagery that was really bright and colourful”. Comparing the two, Elijah mentions the opposites at play. “We wanted it to be a grimier juxtaposition to how pretty ‘Too Far Gone’ was.” He clarifies that “because ‘Too Far Gone’ was the heavier, more rugged song with the prettier music video, and ‘Lord of Flies’ was the prettier song with a much dirtier music video.”

Divulging in more discussion behind the album itself, we attain more information regarding the surfeit of influences Cane Hill had. Pantera, Metallica and Gojira are just some of the influential “heavy-hitting metal bands” they referred to during production. “James (Barnett – guitarist) was listening to a hell of a lot of hip-hop; Kendrick Lamar’s ‘Damn’, a bunch of old Usher records, Drake’s ‘Views’, the disco beat songs he has on there,” states Elijah. “All of their interludes are what we latched on to because we wanted to make the album feel artistic, in the sense that it flows into one big story.”

We even learn how Cane Hill intended and anticipate the way people will be listening to the album. “It’s important to us that you listen to it front to back to fully understand it.” Witt expands by saying, “obviously, you can flick through songs and choose, but if you really want to get what we were trying to say, you have to listen from track one to track ten non-stop because it builds a better story.”

“Unfortunately, the music industry right now seems to be at this weird turning point where no one cares as much about a full album.

On that note, the topic leads to deliberation on a key talking point within the music industry at the moment; the theory that consumers only being interested in singles, rather than albums. Witt expresses his thoughts on the music industry disregarding the need for albums. “I’m left and right on it,” he states. “I still love the artistic creation that goes into a full album, the preparation and methodical placement that goes on. But unfortunately, the music industry right now seems to be at this weird turning point where no one cares as much about a full album and 90% of people are going to listen to just the singles”. He spoke about how Spotify and monthly listeners have a huge influence on artists feeling the need to release new material any time their numbers drop. “That whole equation is really strange and foreign to me.”

Relating it back to their scene, he reports that “metal is having a really hard time keeping up with the changing patterns in the music industry, and I think a lot of that is to do with how metal has always been a very hard headed; ‘this is how we do it’ and ‘this is how it’s got to be done, we don’t care about the other trends.’” Witt knowledgeably adds, “but when everything is dying, you have to evolve and adapt.” To round off, he lets us know that he’ll “personally find out, because I don’t think we want to do the “just single” route anyway. It sounds very boring, very shallow.”

After a long journey of working hard to find themselves, they have embarked on a constant evolutionary journey from their first EP in 2015. Staying true to their controversial methods, with no intentions of holding back, has brought them well-earned success. Despite their first UK visit only being two years ago, this tour has proved their fanbase is ever-expanding after the achievement of a triumphant album. With the release of ‘Too Far Gone’, Cane Hill have proved yet again that they are a force to be reckoned with and deserve all the recognition they have been receiving since, amongst fellow musicians and fans.

‘Too Far Gone’ by Cane Hill is out now on Rise Records.