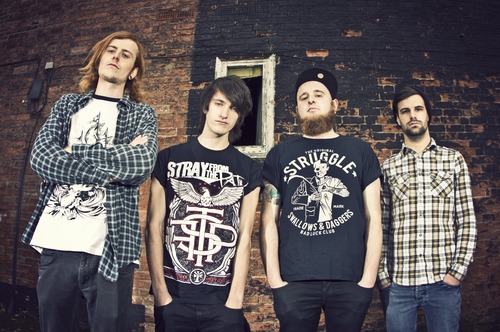 Self-proclaimed Northern Bastards Black Dogs have been turning heads up and down the UK for quite awhile now. Last year’s debut full-length, ‘Grief’, contained some of the most punishing splices of metalcore we’ve heard in sometime. Songs like recent single ’13 Bastards’ and ‘Savages’ are incredibly intense yet we just can’t get enough.

Currently on tour once again in the UK, and having played numerous festivals in recent months, we caught up with 3 fifths of the band at Sonisphere to discuss the video for ’13 Bastards’, becoming a five-piece, and the follow-up to ‘Grief’.

Already Heard: To begin with can we get your names and role in the band?
Gollo: I’m Gollo. I’m the vocalist.

AH: You played earlier today on the Jagermeister stage. How was it?
Gollo: Sick mate!

Zakk: Absolutely awesome. We were well received. A full tent of people and we got a wall of death to finish off the set.

AH: Is this your first time at Sonisphere?
All: Yeah.

Gollo: And the weather as well. You can’t ask for better weather.

Zakk: I’m a bit too hot if anything.

AH: We hear you’ve got a new video/single out?
Gollo: Yeah for ’13 Basatrds’. We shot it in Wales. It’s had a really good response. It’s a pretty dark video.

Zakk: It’s very cinematic. Even if you’ve not heard the band before, it’s worth checking out.

AH: Just for those who haven’t heard you before, how would you describe your band?
Gollo: Horrible (laughs).

AH: You recently played both Camden Rocks and Ghostfest. How were they?
Gollo: Both really good. Just a really responsive crowd, which is something we’re finding a lot more at recent shows.

Zakk: Obviously Camden Rocks was sort of a different place. It was a posher place…

Gollo: It’s always encourging to get that response.

AH: Going back to playing on the Jagermeister stage earlier, is that something you’re more comfortable with?
Gollo: I’d be quite happy walking out on to that main stage.

AH: I noticed you had a line-up change recently. Can you tell us about that?
Gollo: Yeah. We used to be a four-piece but now we’re a five-piece. We’ve got 2 new guitarists so we’re getting into the writing process now. We’ve all sort of semi-moved from one Northern location to another.

Canty: We can’t tell you the details to our camp!

Canty: We’re writing again and just working towards the next release. We got  loads of shows coming up as well.

Gollo: Yeah we’ve got a bunch of dates off the back of the festival. We’ve got the first date in Southampton on Sunday, so we’re unfortunately having to leave Sonisphere a bit early. So its a headline run all through the week, we’ve got (UK) Tech Fest on Friday and we’re supporting Devil Sold His Soul on Saturday. So it’s going to be a good week for us.

AH: Are there any bands you’re looking forward to seeing at Tech Fest?
Gollo: Sikth a hundred times. Just Sikth. It can just be “Sikth Fest” and that’d be fine. And then us as well.

AH: As you mentioned you’ve been writing. Is there a new record in the works?
Canty: As I’ve said, we released ‘Grief’ last November, and that was well received. So we’ve been in the process with the new guitarist. So we’re literally just started writing for the next record now.

AH: Any aim as to when you want to have it out?
Canty: As far as having it out, we’re not really there yet but we usually don’t tend to take to long to get an album out.

Gollo: We’ve got a big stock of riffs called the “wank bank”. Its just a big stash of riffs.

Canty: So yeah, we’ve always got plenty of riffs going, so we’ll get that out soon.

AH: So basically it’s done when it’s done?
Gollo: Yeah. We’ve got the pieces to the puzzle, we’re just putting them together now.

AH: So after the tour and festivals, is that when you’re going to crack on with writing?
Gollo: We’ll get things sorted. We will knuckle down. We’ve just moved into a new practise room, which is where we tend to lock ourselves away. We will be writing and living there. It’s nice and big apparently, I’ve not seen it yet. We’ll be mooching in there for a while getting it done.

Canty: The writing process is like the band, its intense. We lock ourselves in there.

AH: Do you write as a group?
Canty: Yeah mainly. We’ll have guys writing riffs and bringing ideas to the table, then it all comes together.

AH: Any final words to close this interview?
Gollo: Check out our album ‘Grief’ on Spotify or buy it off Amazon or from Destroy Everything. Just get your hands on it and give it a listen.

Zakk: Cheers for having us play the festival with the (40th) anniversary and everything. We’re really happy to be playing it.

‘Grief’ by Black Dogs is out now on Dstry Evrythng.