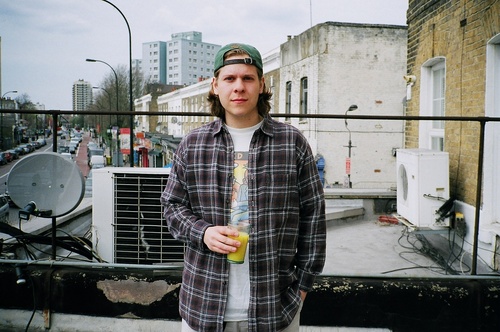 You might recognise him from his previous band Basement, but Andrew Fisher is currently going it alone with his new project Honey Milk. Don’t expect it to sound anything like what you’ve heard previously though. Honey Milk is a much more pop-orientated acoustic solo (for now, anyway) project, which automatically distances itself from any musical style you might have began to associate with the former Basement front man.

We managed to catch up with Andrew after the release of his first five song demo (which is up for free download at his Bandcamp, I might add) just to get a little look into what the future holds for Honey Milk and also a little insight into what goes into writing a Honey Milk song.

Already Heard: Hello Andrew, could you first give us a brief overview of who you are, what Honey Milk is and how the project came about?
Andrew: Hello. My name is Andrew Fisher and I sing and play guitar in Honey Milk, currently a one-man pop project. I’ve always played guitar in my room from a very young age and always wrote songs and sang silly things about whatever was on my mind. Honey Milk is basically me trying to capture that simple carefree style of playing music in a way that doesn’t sound rubbish (I hope). I used to live in Manor Park in East London and I hadn’t had an acoustic for a while since moving away from my parents. I found one that I knew was worth a lot more than Cash Converters was asking, so I bought it and started writing songs to keep me busy and get things off my chest.

AH: You recently released a demo as a free download, were you happy with the general reaction it got?
A: I think so, yeah. It’s nice when people like the things you do. The thing I’ve noticed though, is a lot of people like either what they are told to like or what they think is cool, which is usually what they are told is cool. As long as my close friends like it then I’m happy. I like it and that’s what’s most important.

AH: How long have the songs on the demo been ‘in the making’?
A: Not long at all. I think I wrote them all at most, the month before we recorded. I write songs almost daily. I record them on my phone and the ones that stick in my head and make me wanna listen back to the recordings or play again are the ones that I wanna record. It works well that way because I’m constantly being creative, but also separating the good songs from the bad.

AH: I haven’t seen many Honey Milk shows advertised, in fact I haven’t seen any other than a show at The Old Blue Last in London with The Story So Far a few months back, do you have any tours or shows in the pipeline, or is playing live not really something you’re focused on right now?
A: I want to play shows but I don’t have a lot of time. I don’t know anyone in scenes that Honey Milk would fit in at so I haven’t tried to play anything recently. That show happened by accident to be honest, haha. I really wanna play shows though. If you or any readers know anyone that would wanna put me on, let me know!

AH: Do you see Honey Milk staying acoustic for it’s entire duration, or are there any plans to eventually evolve into a full band over time, as with many other projects that start acoustically?
A: I really want it to be a full band. I don’t think I ever wanted it to just be me. When I write songs I know in my head if it’s for a full band or just acoustic. Right now there’s way more full band songs. I really want to record a full length, but that depends on time and people willing to help out.

AH: Is there any reason that there are no social networking profiles for Honey Milk? No Facebook, Tumblr, Twitter… well, not that I have seen, anyway. All of which seem pretty standard for any artist or band to have in 2013.
A: There is actually a Tumblr now, but that was just so I could put lyrics up somewhere and so people could contact me if they wanted to. I guess I just didn’t want it to be about anything but the music. I’m not interested in trying to push it anywhere, but it’s there if people want to find it. I like Tumblr because it can be as simple or as extravagant as you want. Mines pretty bloody simple haha

AH: Are there any particular influences you have when it comes to writing songs for Honey Milk?
A: It’s pop music so it’s things that have obvious melody and are guitar driven. Older Bowie, Simon And Garfunkel, Crowded House, Mamas And The Papas and then things like Lemonheads. I try not to focus too much on what I want it to sound like though. As long as it sounds simple and there’s something to sing along to. To be perfectly honest the biggest influence is my Dad. One of the main reasons I recorded the demo was so I could show him songs he would actually want to listen to. It’s ‘Dad friendly’ music haha. Maybe that’s the genre?

AH: Have you already started work on new material? If so, what’s the plan? Album, EP, Single?
A: It’s an ongoing thing. I have more songs than I can remember. I think I’ll do one more acoustic EP and then try and record a full band album. We’ll see what happens and whether I can find the time. My job is pretty demanding.

AH: A few readers might recognise you from previous bands you’ve been a part of. How does song writing on your own compare to having a group of people around you to bounce ideas off of? Is it harder or do you feel like the finished product is more how you originally imagined it, as it doesn’t have other people tinkering and messing with it?
A: It’s both brilliant and terrible. Its great because when I have something in my head I can get it to sound like what I want, because I know what I want because I’m me, if that makes sense. So all the songs sound and feel like me. But that’s also probably the biggest negative. I am one person and I am limited by being me, because I can only do what I can do. I write songs that sound like me and that’s great, but that’s very limiting. Songs are best when you bring ideas to a group and give everyone the opportunity to add their own touch to it, to hone it to a sound that sounds like a band and not just a person. I guess for this project it’s not so bad. I don’t mind that it could be better, because this is me and this is all I can do. This isn’t meant to be perfect by any means.

AH: What about the recording process, I’d assume that runs a lot smoother with just the one of you?
A: It’s easier, but there’s no one there to turn to. So far I just record with my friend Matt and he’s brilliant, but he’s not in my head. It’s weird relying on yourself. I’m actually very lazy and I find myself settling for takes that probably should be done again. I actually hate recording. I need to be more disciplined.

AH: What have you been listening to most recently?
A: The Lemonheads, The Blake Babies, Joni Mitchell, loads of T Swift and that new Drake record. He’s so bloody good. Like, crazy good. It’s no Take Care, but it’s great. I’ve been listening to LOADS of McFly too. Not even ashamed of it. Incredible songwriters. Tell me ‘All About You’ isn’t one of the greatest love songs of our generation. It’s perfect.

AH: Lastly, any bands we should all be listening to?
A: McFly. Stop kidding yourselves. They’re better than the Beatles. Listen to Plough Lines from Manchester as well.

‘Demo’ by Honey Milk was released earlier this year as a free download via Bandcamp.