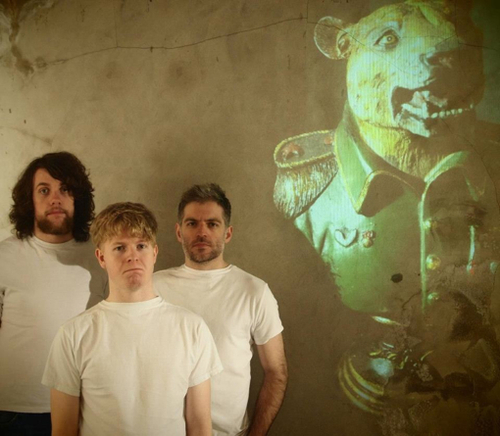 Hailing from the North West coast of Liverpool are The Beatles, and now we’ve also got Alpha Male Tea Party who are miles better. There’s only 3 of them, they don’t sing and there’s no jokes about who is the best drummer in Alpha Male Tea Party. Yet.

Maybe something in the water has changed over the past 50 years as instead of poppy classics Alpha Male Tea Party are all in your face with other classics such as ‘Truffles’ and ‘Taste Like A Dog’. Both of these can be heard from the Already Heard approved 4 star EP ‘Real Ale And Model Rail: The Lonely Man’s Guide To Not Committing Suicide’.

If all that wasn’t enough, this interview sheds lights on what is their favourite party of a tea party, bribing technique and what a Geordie chap from Liverpool has to do with anything.

Already Heard: So gentlemen, I’m ever so curious as to how your wonderful name was conjured up and what is your favourite part of a tea party?
Tom: Greg wanted me to make up a story about this so here goes. We were all out rambling in the lake district one day, as that’s something we like to do. We thought we’d try Scar Fell Pyke as we’d not done it before so we did. When we got the top we decided to strip to the waist and hit each other with thorny sticks. After enough skin had been flayed, we sat down and had a picnic. We then mused about how we imagine a pack of alpha males might prepare for a tea party. In reality, it was just phrase that popped into our heads that we thought sounded funny. In terms of favourite elements of a tea party, Ben provides this answer; ‘cake’.

AH: You quite rightly describe yourselves as aggressive sexual calypso. Please can you name the 5 most interesting bands that influence you and why you picked them?
Tom: We can’t take full credit, or indeed any credit for the aggressive sexual calypso tag, it was a nice Geordie chap from Liverpool who coined that. Good phrase though, definitely. As far as influences go, I can’t speak for the other two completely but I will anyway;

Deftones: It’s Deftones, who doesn’t like Deftones?
Three Trapped Tigers: I listen to Route One Or Die on headphones from time to time and think about how it would make a brilliant soundtrack for a massacre.
Everything Everything: We like to sing this together in the van after we’ve shouted at each other.
Dub Trio: Filthy riffs with amazing musicianship and delightfully quirky nonsense in between.

Oceansize: Finding Oceansize made me want to start our band and we conveniently all love them. I don’t think we really sound like them but it was a major ‘catalyst’ to begin with. Kill me.

AH: Your latest EP ‘Real Ale and Model Rail: A Lonely Man’s Guide To Not Committing Suicide’ was given a wonderful 4/5 by our Swiss god James ‘Bearclaw’ Lewis (and you can read that very review here). How much did you pay him, and if that review wasn’t enough, how would you persuade people to pick up a copy? You may write a poem if you wish.
Tom: We normally bribe people with Curly Wurlys but I’m not sure he got anything this time so we have no idea why he’s been so nice. But if we were to persuade people to get the EP we’d probably say something like ‘it’s at least a little bit more interesting than Keane’. Poetry isn’t a strong point of ours.

AH: Can you describe the EP with 3 words, with each word beginning with ‘w’?
Tom: Fucking dead boss.

AH: What is the weirdest show you’ve ever played and why? Any other interesting tales from your previous tour?
Tom: Well. We’ve had some funny ones, playing in an old fort was good. Getting told to turn down twice in Edinburgh on two separate occasions by environmental health was also good/not good as we were partly responsible for shutting a venue down. One show involved many tomatoes in a cage. Some other stuff that is too dark and terrifying to mention that involved lots of mold and a deep, unshakable feeling of regret.

AH: Who are your best musical buddies and why? Name drop them all over the place and make them feel loved!
Tom: There are absolutely tons of bands we should mention so I’ll try and be concise. Cleft are basically our Siamese twin, we seem to play with them everywhere, all of the time and they are brilliant but Dan always makes me drink super strength Cider then I throw up yellow which I don’t like. Vasquez are from Edinburgh. They are perfect gentlemen and their song ‘Low To Be Heavy’ contains the best guitar hook you will ever hear in your entire life. That is an undisputable fact. Axes are babes. All of them. Vasco Da Gama are our favourite band from Liverpool although we don’t often play with them in Liverpool. Their EP Geography is 15 minutes of pure joy.

AH: And finally, who do you miss more? Reuben or Blakfish?
Tom: I put this question to Greg and Ben who both responded with nonchalance. I believe they enjoy the works of both afore mentioned bands however not enough to provide an informed decision. This said, my answer would be Reuben as I think there is something very special about that silly little three piece, Jamie is an absolute dude and the way their honesty and love for music underpinned everything they did is massively inspiring, nothing about them was ‘bullshit’. Although I love both bands, Reuben have a pretty special place in my cold, unloving heart.

‘Real Ale And Model Rail: The Lonely Man’s Guide To Not Committing Suicide’ by Alpha Male Tea Party is out now on& Superstar Destroyer Records.