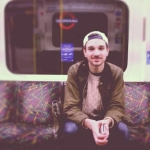 Over the past 18 months Bath pop punk quintet Decade have been gathering momentum through relentless touring and a handful of EP’s and singles.However for vocalist Alex Sears, 2013 is set to be a busy year. Not only are Decade putting the finishing touches to their “crowd-funded" début full-length, Sears is set to release a solo EP under the alias of Sophomore.

‘The Blue EP’ sees Alex writing, performing and producing all by himself with the end result being a highly favourable collection of grunge-tinged basement punk songs, that shows a different side to Sears compared to his "full-time” job as Decade’s frontman.

Alex recently took some time out to speak to Already Heard where he discussed Sophomore, writing and working alone, having creative freedom, working with Romesh Dodangoda on the new Decade album, their forthcoming tour with Light You Up and much more.

Already Heard: Hi Alex. How are you today?
Alex: I’m very well thanks!

AH: Sophomore is your solo project away from Decade. Is there any meaning or story behind the name?
Alex: It’s pretty straight forward really; the term ‘sophomore’ is generally used to describe the second year of high school or uni in the US, and some bands use the term instead of saying ‘second album’ or whatever. I saw the project as my second musical outlet after my band Decade, so it made sense to me.

AH: From hearing ‘The Blue EP,’ Sophomore is a slight departure from Decade’s Pop Punk sound. Would you say Sophomore’s sound is more edgier?
Alex: I wouldn’t say edgier, I’d just say it was maybe a bit more emotional. I grew up listening to post-hardcore and because I’ve never really done that sort of thing with Decade, I thought it would be a great chance to include some of my older influences into my music, only with Sophomore instead.

AH: Did you have any idea how you wanted the EP to sound when you started it?
Alex: Yeah, I wanted it to sound like it was written 10 years ago but with a fresh modern twist. I can’t really tell if I’ve achieved that yet but I’d like to think so!

AH: Sophomore is entirely you. On the EP you play all the instruments and produced it on your own. How have you found having so much creative freedom?
Alex: It’s been really cool because I am the boss of everything! I guess in a way I could be shooting myself in the foot because when Decade writes songs, we all have our own perspectives and that helps a lot sometimes, and obviously with Sophomore I don’t have that. However I do really enjoy it because the sense of pride when you start a record to when you put it online, knowing you did it all off your own back, is huge.

AH: With the songwriting process on ‘The Blue EP,’ how has it differed from writing a song with Decade? Is it case where you can openly write about whatever you want and you’re not held back?
Alex: If I’m honest the process was pretty much identical. The only difference is with Decade, we’d take the ideas to the practice space and tweak them so that we are all happy, then re-record them etc, whereas with Sophomore I’d pretty much start a song, finish it and never look back. I don’t like to redo songs much, it’s not productive to me because nine times out of ten I’ll end up with something worse.

AH: Can we expect to see Sophomore in a live capacity at some point?
Alex: I’d love to do it at some point, who knows! My only concern is that it’d be overambitious; some of the songs have three guitar parts, three vocals, drums, bass and keys! If I can make it work then I’d definitely have a go at playing it all live, although whilst Decade is my first priority I’d never be a ‘real’ band.

AH: 2013 sounds like it’s going to be a big year for Decade. You recently completed work on your début album with producer Romesh Dodangoda at Longwave Studios. How has the album been coming together?
Alex: The album has just been coming together like clockwork man! We took the songs we had into the studio, and literally with every part tracked, we’d all look at each other like ‘this record is going to blow minds!’ We are so happy with the way it is sounding so far, and I think a lot of people will be surprised at where the band is at musically, at the moment.

AH: Am I right saying you went into the studio with songs already demoed? If so what input did Romesh have on the songs?
Alex: I think I demoed over 100 songs before we found the bunch that the five of us thought were strongest. Romesh worked his own magic here and there, adding the harmonies that he’s famous for! He’s just the best dude because he won’t force ideas on you, he’ll make good suggestions and if you don’t like them, he won’t be at all offended and he’s great at compromise!

AH: Compared to previous releases, how have the bands sound developed on the new songs?
Alex: We’ve not been afraid of being judged which I think we had issues with in the past. Not to discredit our previous releases but I think we played it safer than we could have. This new record is us doing what we want to do, and we haven’t held back at all. As individuals, we all listen to very different music, and the influences we all bring to the table are extremely varied! I think all of this is evident in the songs.

AH: When can we expect to hear more about the album?
Alex: We’re just trying to lock down the last few bits and pieces before the album is ready; there are still a few vocal parts that need doing! We’re really hoping to have a release date soon, but we’ve been telling people late spring which is looking likely.

AH: The recording of the album was crowd-funded through the bands website. How was the response and feedback from the campaign?
Alex: The response has been ridiculous! It’s really humbling to actually see how many people want this album. We had so many people helping out in any way they could, and it was amazing to see. If you did help out by preordering the album or by buying merch and you happen to be reading this, thank you so much, and I guarantee you will fucking love this album!

AH: What are your general thoughts on similar “crowd-funding” services like Kickstarter and Pledge Music? Some have said these services have been misused.
Alex: We don’t think those websites are particularly bad, it’s just that we are the most regular dudes you will ever meet, and we thought the only way to fairly raise money for this record was to give something in return; a physical thing that our fans can keep. For us to go on Kickstarter and have pledges like “hang out with the band for the day, only £500!” would be the complete antithesis of what we all believe in. I’m not gonna let our fans pay that much money to hang out with me, a kid who still lives at home and works at a supermarket to fund his band. What’s right about that? If they wanna hang out, then they can do so for free when we are on tour.

AH: Do you think they work when a band is at a certain level of status or the objective set is realistic?
Alex: Yeah, I think as long as the fans aren’t being taken for a ride then it’s all good. I mean, if a band was huge, then I’d totally get why someone would pay £500 to hang out with their heroes I guess. But having said that, if the band was huge then I am sure they’d be able to fund their own record.

AH: In March you’re heading out on the road with Light You Up as part of the Atticus Beer UK tour. What can we expect from these shows?
Alex: You can expect a huge party from Light You Up, with me going to bed early to save my voice! Haha, no it’s going to be brilliant. We toured with those guys back in October and I’ve known Drew (Masters – Light You Up guitarist) and Rob (Taylor – guitarist) for a while anyway, so it’s always great to see them. I guess you can expect fun, intense live music and a lot of free Atticus beer being passed about!

AH: Will these shows be a good opportunity to try out the new songs?
Alex: Definitely, the five of us still haven’t decided what we’re going to throw in there quite yet though! We don’t want to give too much away, so we’re going to play the ones we think people will grasp but that won’t give anyone too much to hold on to. At least till the album comes out!

AH: For people who haven’t seen you live yet, why should they come and see Decade and Light You Up?
Alex: They should comes see us because we aren’t rockstars; we are normal guys and I know it sounds cliché and every band says this but we have a lot of fun and we love what we do. We’ll always make time to talk to people because at the end of the day, fans don’t owe us anything and we’re grateful that they come out and see us each time! Plus sometimes we all dress up like women…

AH: Do you have any closing words for the Already Heard readers?
Alex:Yes! Thanks to everyone in advance for downloading The Blue EP, I hope you enjoy it, and it’ll be ‘pay what you want’ on sophomoreuk.bandcamp.com. Also, huge thanks to all the Decade fans for being patient during the creation of the album, I promise that you’ll love it and it’ll be worth the wait. Peace!

‘The Blue EP’ by sophomore is out on February 15th.