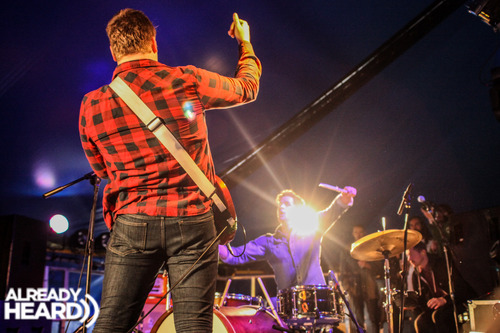 After delivering one of the best debuts of the year with ‘In Humor and Sadness’, the duo known as ’68 recently made their first trip over to the UK. Having played a run of headline dates, their visit climaxed with an explosive set at Hevy Fest, where we caught up with the pair.

For vocalist/guitarist Josh Scogin, he was returning to Hevy Fest for a second time having played their previously with his old band – The Chariot. However having called time on that band late last year, Scogin quickly got to work on the ’68 and their debut full-length. He was soon joined by drummer Michael McClellan. Together they’ve produced ‘In Humor and Sadness’, a record where its roots lie in bluesy garage rock with angst and a hint of hardcore.

When Already Heard spoke to the duo, we were keen to find out how the pair came together and what is the meaning behind the phrase “Regret Not”. Thankfully Josh and Michael were willing to answer our questions.

AH: For starters can I get your name and role in the band?
Josh: My name is Josh Scogin. I am the singer/guitarist of ‘68.

Michael: My name is Michael McClellan and I play drums in ‘68.

AH: You’ve recently been on your debut UK tour. How has it been?
Josh: It’s been good. We actually got invitied to play Hevy Fest, and to make ends meet we put some shows round it. I had no idea it was going to turn out this well. So its very nice for a couple of lads from the States like us.

AH: Josh this is your return to Hevy, you were here with The Chariot in 2012. How does it feel to be back?
Josh: It feels good, real good. It’s obviously very different to when we where last here, but its nice to be invited back. I’m anxious to see how the show goes tonight and feel it out from there.

AH: And Michael how are you finding it so far?
Michael: It’s awesome. First time here. It’s really great.

Josh: He got a sweet shirt from Atticus.

Michael: You can’t see it but I’m repping it right now.

Josh: He’s kind of glowing still because I think that is his favourite company ever.

AH: Movng on to the album. When did you start writing that? Was that when The Chariot was still active?
Josh: The Chariot’s final tour was in November, and other than a couple of songs we had put on a 7”, I started writing the record the week after The Chariot’s farewell tour. I literally had a week to write the vast majority of the record. Mentally I was still like “Wow! This thing I was involved in for ten years is over but I’m very excited about the future.”

AH: How long did the album take to come together?
Josh: I wrote a vast majority of it in a week, and recorded for about a month off and on a bit. It was all very fast. I had almost planned it that was on purpose because I didn’t want to overthink things. I didn’t want to stand there and think “should I make it more like a Chariot album or less like a Chariot album,” I just wanted to not have a lot of time. I started writing out of my gut instinct. It needed to be done then, so it was all very fast paced.

AH: And how did Michael join?
Josh: He joined because I called him up at a Burritto place, and I said “do you want this burritto?” He said “yeah” and I replied with “by eating this burritto you’re going to join my new rock duo”. He was literally my first call. I know him from the studio. He was the first person I thought of when we started to do this.

AH: In terms of sound, were you concerned that people would compare it to The Chariot?
Josh: It was a thought that passed my mind. I never write based on what people might think because I have no idea what people are going to think. I don’t know if they are going to like stuff or hate it, so I have to write based on my own convictions and thoughts, and hope people like it enough to be able to keep playing shows. But ultimately I know that I’ve never written music for the masses, music for the general public to consume so therefore if people aren’t into it, it is never a shock like “What! You don’t like it?” It comes with the territory and I understand that we’re not writing Top 40 pop hits that are supposed to be bubblegum consumed. We don’t go by the formula to make mass amounts of dollars doing this. I never write based on that, but if people aren’t into it or if anyone is not feeling it, it makes some sense you know. I definitely entertain that idea for a second, I just write. I find with Rock and Roll music using your gut instincts is the right way to go anyway, (otherwise) you start overthinking things; “is it too much like this? Is it too much like that? Is this a better idea or is this a better idea?” That is when it starts getting very stressful and very complicated, and I don’t enjoy recording like that.

AH: Just allow it be it’s own entity?
Josh: Exactly. Just let it help you along the way. I feel the songs eventually start writing themselves, things make sense; “oh this needs to go after this riff” then have a song then before you know it you have an album.

AH: For those who haven’t heard the album yet, how would you describe it them?
Josh: I never know what to say to that as with any art. I spend my time pushing away boundaries and pushing away barriers, then all of sudden be like “here’s the box I’m in.” Having said that it is real humans playing real human music. I know its convenient but we don’t copy paste a riff and we don’t sample drums, we actually play it. Its a shame in this day and age that is an accomplishment. I thought we were all humans but nevertheless I just want to make sure we are humans and we are playing all the music. Its not copied and pasted out of convenience and auto-tuned and pitch perfect in every way. It’s real and geniune. I think anyone who has seen us live maybe appreciates that. We don’t put on a facade that is not real to what we do live.

AH: The track listing makes up the term “Regret Not.” What is the meaning behind that?
Josh: Lately I’ve been feeling a lot of people do things based on fear of failure. Maybe its our parents to blame, maybe its society, I don’t know who’s to blame but I think a lot of people base a lot of what they do on “what if I fail?” The more I started thinking about that concept and that world, I was like “I don’t know if failure is real.” I think it is a term we needed to come up with based on “this didn’t go the way I thought it was going to go.” Some people could look at The Chariot as a failure but I look at it as a complete success. We got to play a lot of shows and travel a lot of places. So when I started thinking more and more about failure and the way people live their lives based on that, I was thinking about how that if I don’t know if it exists but regret is something very tangible and very real. You can prevent regret, well for the most part, there are some exceptions.

I was thinking about being 60 years old and looking back on my life, and even with ‘68 I was in an emotionally unique time because this comfort bubble I had created, The Chariot, had now popped and what does the future look like? I don’t know but I want to write or do my life on fear of failure. I wanted to do it based on being 60 years old and being “well at least I have no regrets.” Because when you’re sixty and you look back on it, if it did “fail,” you gave it your all and that is all you could of done. If it failed then so what? I tried and it failed, at least I’m not sitting going “what if I had tried? What if I had done this?” So my whole life is somewhat of a testimony towards this thought process. I don’t care about failure. I don’t care if something “fails” but I don’t want to look back and have regrets eating me up because you can never have that back. So when it came to a tracklisting it made sense as it’s been in my brain a lot lately, so I’m going to write it down.

AH: To finish off do you have any final words to share with the Already Heard readers?
Josh: Not really. Just thank you to anyone who took anytime to check us out or even read this interview. I know I ramble a lot so sorry to whoever has to edit this. Thank you so much.

‘In Humor and Sadness’ by’68 is out now on eOne and Good Fight Music.