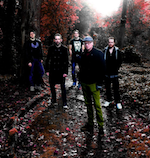 Tech-metal band Centiment have announced they will release their debut album, ‘Streets of Rage’ through PledgeMusic on 17th February.

A track from the album, ‘Zero Tolerance’ can be streamed after the jump below and the album release will coincide with a UK tour.