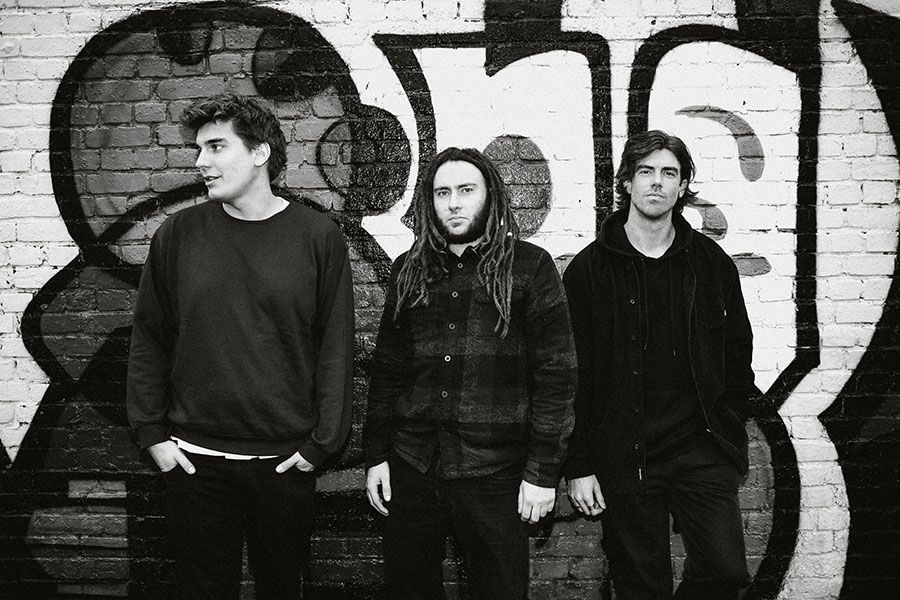 Last year we introduced you to Morale. At the time, we impressed by the trio’s brand of alt-rock. Channelling a mix of old and current influences, the Guildford-based band show defiance and bucket loads of urgency.

Today sees them release their debut EP, ‘Left For Dead’. Consisting of four songs, it’s a short yet sharp statement of intent executed with grit and determination. Past singles, ‘Hold Me Down’ and ‘Mirrors’ highlight Morale‘s flair for producing mellow verses before giving us a thriving and explosive chorus. Whereas the title track and ‘Wasted’ are drenched in 90’s grunge with a stirring hook.

Undoubtedly, ‘Left For Dead’ sees Morale wear their influences on their collective sleeve and ties it to an impressive and promising future for the three life long friends.

To learn more about the bands that inspired the trio, we asked them to tell us about the six vital groups that have shaped Morale‘s sound.

Simon (Vocals / Guitar) My earliest memory from a music discovery point of view, goes back to when I was about 12 and I went into the living room after my sister had been watching MTV and flicked through the other channels, where I discovered the video for ‘Everlong’. I had never seen or heard anything like it and it’s still to this day one of my favourite songs. Foo Fighters led me to all types of new music and to really discover myself as a kid. We were lucky enough to grow up through the explosion of genres in the 2000s, with pop-punk, nu metal, emo, post-hardcore, metalcore etc and that all really helped me develop as a songwriter, but Foo Fighters always remained at the core for me and growing up alongside their career helped me find that balance within all the genres I loved. Dave Grohl is a huge vocal influence for me and really got me to push myself that bit extra, he made me want to just let all my feelings out with everything I have. The guy is a legend and a role model, and I can’t believe the band are still releasing some of their best work 25 years on…

Simon: Citizen are a very unique band, they’re one of those rare breeds where as soon as someone puts on a track, you instantly know who the band is, and today especially, that’s very hard to achieve. Their songwriting is in a genre of its own and so pure, it releases such raw emotion and the delivery is so infectious, you can really see what their music does to people when you go to their shows and see how their fans react. I’ve never seen more expressive and die-hard fans in my life, and that just speaks volumes about what these guys create. Mat’s vocals are a big inspiration to me too, the way he can switch dynamics from soft to harrowingly harsh is overwhelming.

Josh (Bass): This is a band that’s had me hooked from the start. The first track I heard was ‘Sweetness out of a friends car stereo and that was enough, I went to town and picked myself up a copy of ‘Bleed American’ later that day, I have listened to it constantly for the last 15 years. Their music is always developing, and you can really hear it from one album to the next but it never loses that distinct Jimmy vibe. Jim Adkins is an amazing songwriter and lyricist, one of my biggest influences for sure. They’re so real and authentic in sound and that’s really inspiring to me, just got to tell your story and be honest.

Rage Against the Machine

Josh: Rage Against the Machine was a name I was very aware of when I first got into music, but it took me until 2008 to fully appreciate them when I saw them headline Reading Festival. It was the most insane live performance I had ever seen, it was just so electric. They kept the crowd waiting a good 20 minutes which in itself really got the crowd going with just sheer anticipation. They walked out on stage to an air-raid siren in Guantanamo Bay-style boiler suits, they just stood still for at least a minute until Tim Commerford was passed his bass and started playing the intro to ‘Bombtrack’. It was off the scale and massively inspiring to me. After that, I absorbed myself into everything they’d done. The anger that goes into writing those songs really resonates with me. They just call out all the BS that goes on in the world and that’s what I love; a band that sends a message through their music.

Toby (Drums): Slipknot have always been a huge influence on me and my musical development, Joey, in particular, opened my eyes to a style of drumming I had never seen or heard before. The first three albums are what really stand out for me, at the time these were released, there were a lot of genres and sub-genres being created around metal, but these guys just kept pile driving through with that unparalleled force no one could replicate. The Self-titled album in its day was one of the most extreme albums I owned. As soon I pressed play I was blown away by Joey Jordison’s crazy fast hands and feet. I hadn’t heard anything thing else like it and it really pushed me to try and keep up with their records. The pure aggression, groove and riffage still injects me with the same adrenaline as it did at the start.

Toby: Unearth are one of the most consistent metalcore bands for me with each album containing the perfect blend of heavy and melodic, with their brutal beatdowns and tight chugging rhythmic patterns, fused with harmonised lead lines and epic melodic compositions. And now with Nick Pierce behind the drum kit, Unearth seem to have found their “Holy Grail” and have managed to somehow take it up to an even higher level!