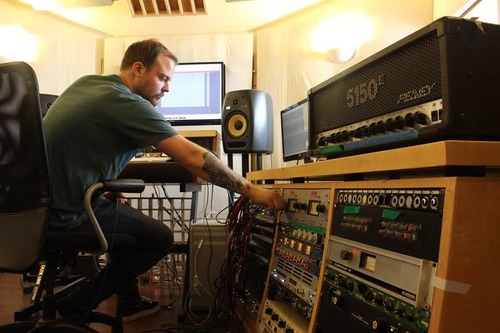 As part of our ever-growing portfolio of features on Already Heard, we’re pleased to begin a new series titled ‘Industry Insight’. The feature is set to highlight the individuals who work behind the scenes in the music industry; from public relations representatives to label owners to producers. We’ll be finding out how their interest began; what they are currently involved with; and to find out what advice they have for others interested in taking up their chosen profession.

The first edition of “Industry Insight” sees us speaking to producer Lewis Johns. In recent years, Lewis has been gradually making a name for himself as one of the names spearheading modern British hardcore. Having toured throughout the UK and Europe with The Long Haul and Goodtime Boys, Lewis has sat behind the desk of releases from band’s such as Gnarwolves, Sharks, Vales, Bastions, and more recently he has been working with Funeral For A Friend.

Johns’ interest in the producing began at an early age with his father being a key influence; “My dad was always really into recording and used to have a studio setup in our loft.” Johns told us. “One of my first experiences of using the studio was apparently breaking his tape machine by switching it off and on as a toddler! When I was old enough, I started using his studio setup to record friends band’s and my interest grew from there.”

Like many young, budding producers, Lewis looked towards those behind his favourite records when he was growing up, with the likes of Rick Rubin, Joe Barresi, Rich Costey, and Ross Robinson spurring on his interest in producing and studio engineering.

Having played with The Long Haul and Goodtime Boys in recent years, he has combined his interest for playng and producing music with both bands, and his hometown of Southampton has allowed him to develop and hone his skills with the infamous Ranch Production House becoming a major factor in recent years.

With the Ranch being Johns’ home for the best part of five years, the studio has plenty to offer for both new and established band’s as Lewis explains; “we have a huge list of great back line which is available for bands to use at no extra cost. We also have an enormous live room with an additional two isolation booths, making live tracking with a decent amount of separation possible. We have accommodation available which is handy for bands travelling from far away.”

By the Ranch offering a friendly, welcoming environment combined with Johns’ accurate approach differing from band to band, it has become the ideal studio for UK hardcore and punk band’s to record. However, although the studio offer a wide range of equipment and gear, Lewis states it’s important to have a firm understanding of what is best for the band: “The things that are most important to me are a sense of musicality and knowing which tool is right for the job (or song) at hand. The most expensive tool may not always be the best option, so it’s good to keep an open mind to find the solution that works best.”

As stated earlier, Johns’ approach differs from each band as he can be more involved in the writing process on some releases than others: “Every band is different and my approach changes from band to band, depending on what they or the song needs. It is usually dependant on how hands on a band want me to be. A lot of the time I’m just engineering a band’s record rather than producing it, but I try and get involved as much as I can with ideas. Sometimes bands ask me to be more involved, so in this case I’d get involved at the writing stage to try and work with the band to offer advice on song structures etc.”

“I think if I approached every session the same, some of the records may not turn out to be what the band intended to sound like, and could end up sounding stale.”

Nevertheless, however hands on Lewis is or isn’t with a band at The Ranch, he emphasises that any band coming to the studio must be prepared before recording; “Everyone in the band should know their parts inside out, before entering the studio to record, but should also have a great understanding of what the other members of the band are doing. If problems arise in the studio it can seriously slow things down.”

Whilst the recording process differs from band to band, there certainly hasn’t been a moment of rest for Lewis Johns. Over the past 18 months he’s worked on releases from Grapper (“Those guys are really great fun, and their record is still one of my favourites.”), Pariso, We Never Learned to Live, Sharks, Human Future as well the forthcoming releases from Gnarwolves and his own band – Goodtime Boys. Since the turn of the year, he’s worked with Palm Reader on the follow-up to their acclaimed ‘Bad Weather’ LP; “The guys have stepped up the songwriting big time on this record, and I’m really stoked with how it has turned out.”

More recently he’s been working with the heavily influential Funeral For A Friend on their seventh studio record. Their longtime studio experience has been beneficial so far to the record as Lewis explains; “They know exactly what they want which helps focus all our energies towards the same goal. It’s really different. Far more stripped back than their previous efforts and less studio trickery. The result is a record which has vibe, energy and feel, and shows the band in their purest state.”

Besides the new releases from Palm Reader and Funeral For A Friend, Johns has a busy 2014 ahead of him with the release of Goodtime Boys’ debut LP (‘Rain’) set for May. He is also set to reunite with Gnarwolves for their first full-length (“I love all of those guys and I’m sure the new record will be just as fun as the last lot.”) In addition, Lewis has other interesting plans for the remainder of the year as he teases; “I’m working with Pariso and Svalbard on something really cool. Also a few other things which are ridiculously cool, but not sure I can mention just yet. It’s shaping up to be a very busy year!”

It is safe to say Lewis Johns’ body of work deserves all the credit it has received, and his influence along with the that of Southampton’s Ranch Production House is certain to be prolonged in the coming months and years. Together they are a vital part of the ever-growing and acclaimed UK underground punk and hardcore scene. By working with both new and established band’s, they are simply improving the quality of music that the Ranch produces.