As we come slowly into summer (believe it or not), a tidal wave of releases come crashing down upon us. With festival season arriving, it can be hard to know what to listen to. Do you prepare for the line-up, or do you listen to these new arrivals? It’s a tough call, with major releases from Nine Inch Nails, Bullet For My Valentine, The Get Up Kids, State Champs, and Mike Shinoda. As well as this, there are some highly promising releases from emerging bands; High Tension, Homesafe, Weller, and Modern Rituals.

Fear not, however, as we’ve sifted through all the albums to wash up on our shores this month to provide you with the 9 must-hear releases for June 2018! 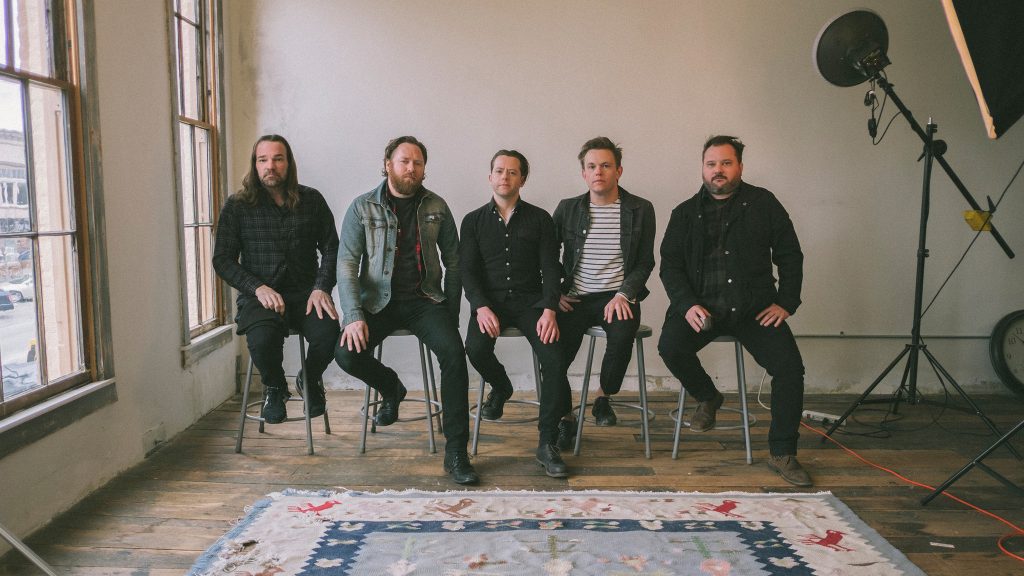 The Get Up Kids – Kicker EP

Seven years have passed since we had new music from these emo rock pioneers. In that time, members of The Get Up Kids have been raising their kids, playing in various solo/side projects, podcasting and getting to grips to being in their forties.
While 2011’s ‘There Are Rules’ somewhat stepped away from their familiar emo tropes that made them such an influence at the turn of the millennium, ‘Kicker’ considerably looks set to be a “return to form”. Recorded in their hometown of Kansas throughout 2017, its four songs sees the quintet come full circle with leadoff single, ‘Maybe’, being a positive sign of things to come. Fuzzed-out guitars combine with Matt Pryor’s distinctive vocals and James Dewees’ ringing keys creating a sound that is certainly reminiscent of classic TGUK.

Whereas ‘Better This Way‘ serves as a powerpop flurry with Pryor sharing vocal duties with Jim Suptic. Its upbeat, thriving energy and earworm of a chorus certainly gives us hope that TGUK are back to their best. Add to that a carefree approach and a rose-tinted lyrical core, alongside reinvigorated urgency, and you’re left with a very promising EP. (SR)

‘Kicker’ EP by The Get Up Kids is released on 8th June on Big Scary Monsters (UK) / Polyvinyl Record Co. (US). 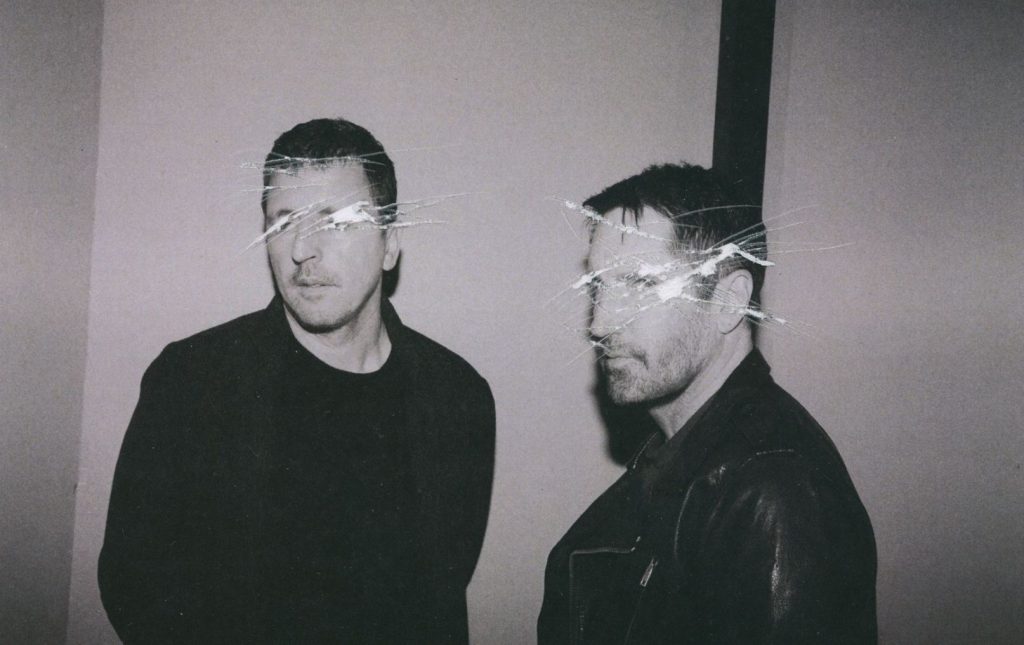 Last year, we were spoilt for brilliant new albums coming from artists who’ve spent over two decades in the spotlight. Everyone from Marilyn Manson to Queens of the Stone Age to AFI delivered works that proved that aging doesn’t mean having to retire all creativity. But in the face of all these albums, Nine Inch Nails reigned supreme with their ‘Add Violence’ EP, a release that seemed to slip under the radar for many and undeservedly so.

On the 22nd, Trent Reznor and Atticus Ross will release ‘Bad Witch’, the final instalment of their EP trilogy, including ‘Add Violence’ and 2016’s ‘Not the Actual Events’. Reznor promises ‘Bad Witch’ to be the most accomplished release of the trilogy, which is why it took almost a year for it to come together. Lead single ‘God Break Down the Door’ is a dancier side to NIN, fitting monochromatic keyboard backdrops with fluctuating synth drum beats, resulting in an intriguing combination of groovy and unsettling.

The past few years have been something of a reclusive period for Nine Inch Nails (apart from their Twin Peaks cameo), but with an enormous US tours approaching, ‘Bad Witch’ is guaranteed to be the light at the end of what has been a very absorbing underground tunnel of releases. Frankly, we can’t possibly guess what the EP will entail, but we trust that Reznor and Ross will hit us hard with 29 years of experience in crafting dramatic mood-setting electronic rock music. (AD)

‘Bad Witch’ by Nine Inch Nails is released on 22nd June on The Null Corporation. 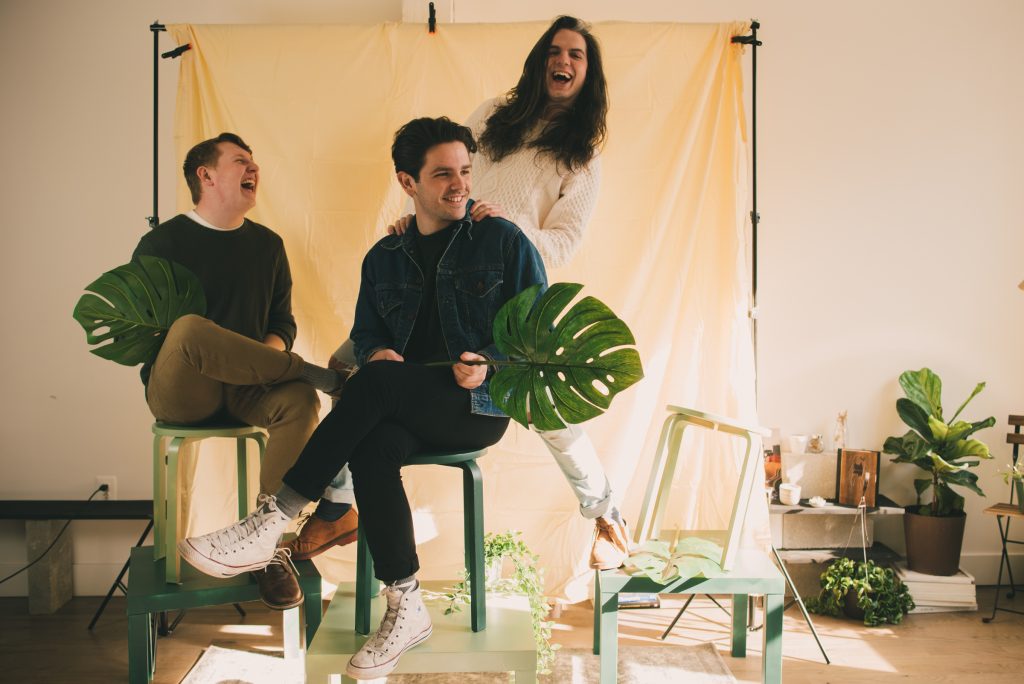 Those quick off the mark will already know how great Weller’s self-titled debut is, considering it was first self-released at the tail-end of 2017. The good folk at Tiny Engines (The Hotelier, Restorations, Adult Mom) certainly did, signing the Philly group up almost instantly and helping to push ‘Weller’ to a much wider audience.

And it’s worth the wait too, for ‘Weller’ is a truly special album, drawing on threads of Americana, indie-rock, emo and 90s college rock. Produced by Jake Ewald (Slaughter Beach, Dog), there’s a certain similarity to the erstwhile Modern Baseball that will strike a chord with many – but certainly not enough that is distracting.

Instead, just prepare to revel in the majesty of ‘Learning Curves’, ‘Answer Anything’ and ‘Standard’ – or indeed any of the other seven songs on offer; ‘Weller’ is pitch-perfect throughout, heartfelt and affecting, but joyous and uplifting all the same. (RM)

‘Weller’ by Weller is released on 29th June on Tiny Engines. 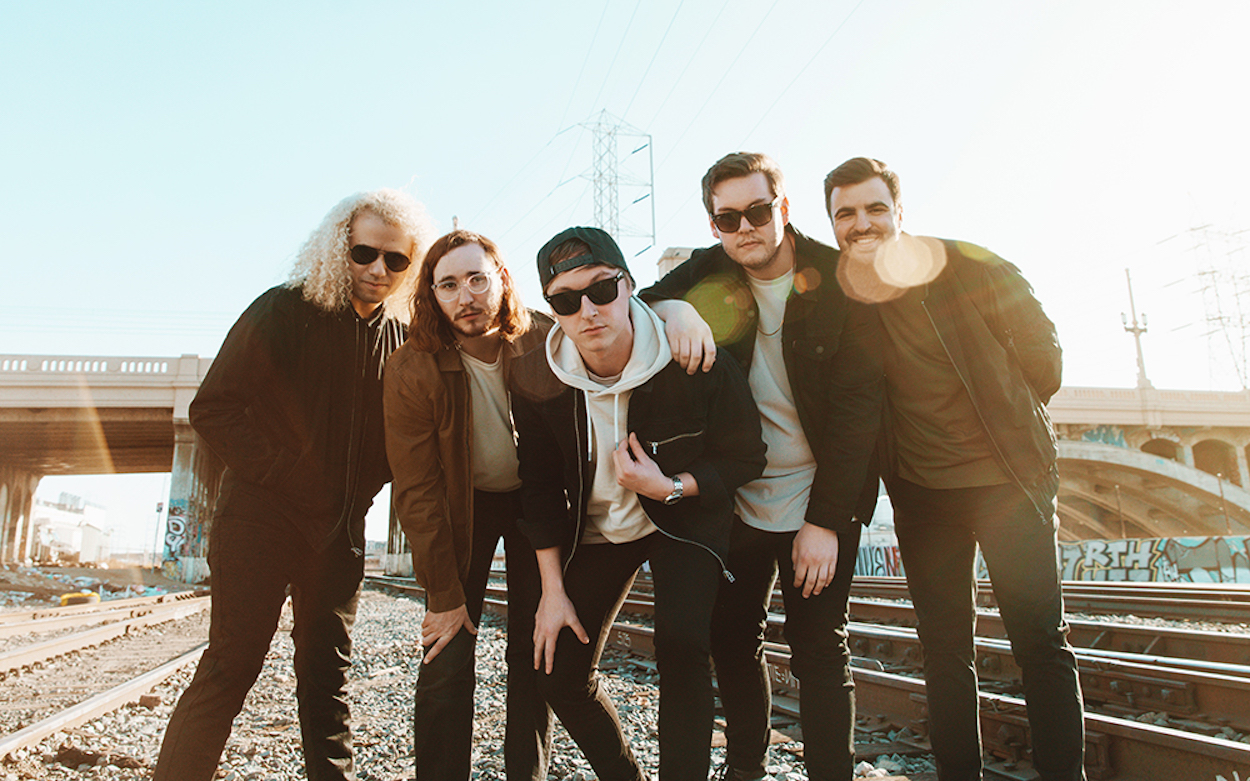 The rise of Albany, NY’s State Champs is undeniable. Since their breakthrough effort ‘The Finer Things’ back in 2013, the band have continuously carved out the shape of the pop-punk landscape, determining the direction of many bands to follow them. 2015’s ‘Around the World and Back’ saw them tread slightly poppier roots, all while maintaining some of the grit of its predecessor. Latest album ‘Living Proof’ sees them further tread those poppier roots with some stellar results.

Lead single ‘Dead and Gone’ bounces with impossible amounts of energy, while ‘Mine is Gold’ is sure to be a crowd favourite with its huge chorus. The work of producer John Feldmann shines through on ‘Living Proof’ as the choruses sound massive and the instrumentation sounds crisp and tighter than the band have ever sounded.

With a UK/EU tour planned for October, State Champs are looking primed to continue their pop-punk world domination, and ‘Living Proof’ will might just be the tool they use to do it. (BM) 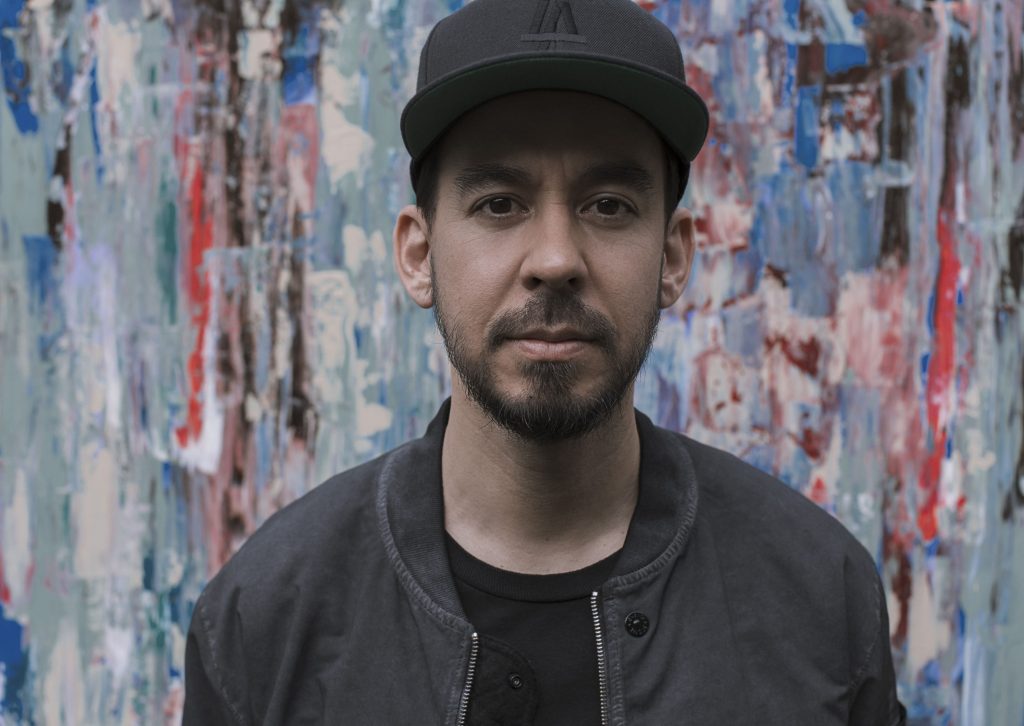 Mike Shinoda‘s material following the death of bandmate, friend and musical icon Chester Bennington has been received with nothing but sheer adoration. His three-track ‘Post Traumatic’ EP released in January displayed his raw battle of dealing with the loss and documented his heartbreak. It’s a feeling that millions of music fans shared all around the world, and made for a cathartic listen to many.

On June 15th, the ‘Post Traumatic’ LP will be released, with support already flooding in. This album marks a new chapter of Shinoda‘s career, with the tracks keeping with the exploration of synth that Linkin Park adopted in their later career, while he returns to producing the visionary bars that he has become so globally cherished for.

This work promises to be a tough listen, but will undoubtedly be a piece that highlights how the power of music can be a constant force in healing the hearts of not only the maker, but the thousands left mourning. (FRJ)

Melbourne four-piece High Tension have been something of a cult concern in Australia’s hardcore scene for the majority of their six-year career. Having spent the past year winning over their home crowd with appearances at Download Australia and touring as the opening band for Refused and Sick Of It All, they return poised to take on the rest of the globe on third album ‘Purge.’

While previous releases ‘Death Beat’ and ‘Bully’ are brilliantly defined by their raw garage-punk production and devil-may-care swagger, ‘Purge’ is set to be a darker record. Lead single ‘Ghost to Ghost’ showcases a much heavier sound for High Tension, influenced by new rhythm section Mike Deslandes & Lauren Hammel, while lead singer Karina Utomo uses the song to detail experiences of the rarely discussed mass killings of families from her home nation Indonesia in the mid-1960s, performed with the spite of someone who witnessed them first hand.

High Tension have never applied by half-measures in their career up, and with ‘Purge’, they re-emerge more energised, angry and determined to spread their messages to more people. It’s time for Oz’s cult band to grab the rest of the world by the jugular. (AD)

‘Purge’ by High Tension is released on 15th June on Cooking Vinyl Australia. 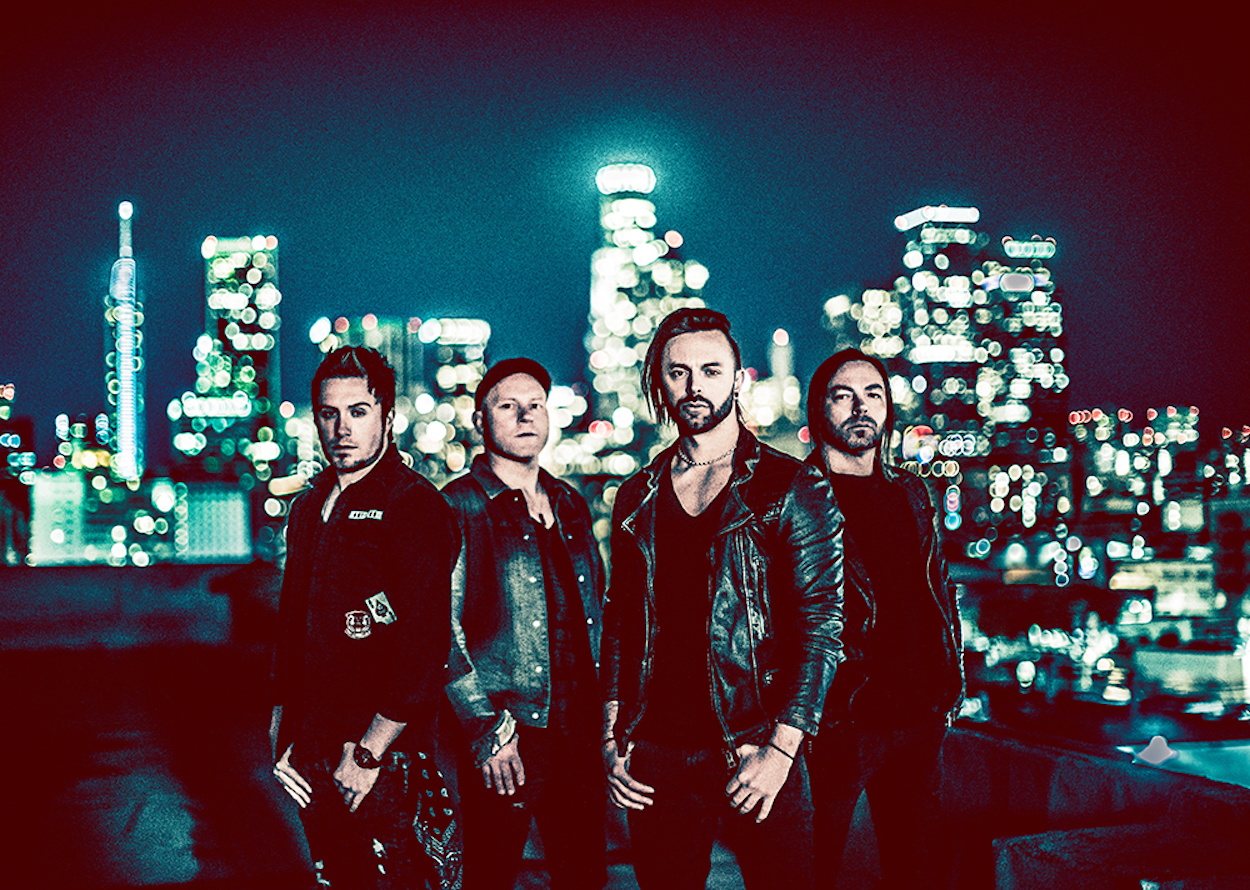 Bullet for My Valentine – Gravity

Bullet for My Valentine are the South Welsh metal giants that keep on giving. After an absence from the scene following 2015’s ‘Venom’, the announcement of ‘Gravity’ will be making fans the world over happy, though it sees a  slightly different approach in their songwriting. However, the band are still keeping their heavy edge that has always kept their albums filled to the brim with chugging riffs and soaring licks.

‘Gravity’ will be released shortly after their appearance at Download this year, where vocalist Matt Tuck has told NME, “I think initially it’s going to take a lot of people by surprise by the way it sounds and the instrumentation we’ve incorporated into it this time”.

When listening to ‘Over It’ and ‘Letting You Go’, the songs contain the traditional BFMV force with contemporary touches. Due out at the end of the month, the metal legends are sure to release another fantastic addition to the South Wales music scene.

‘Gravity’ by Bullet For My Valentine is released on 29th June on Search And Destroy / Spinefarm Records.

Fronted by Knuckle Puck’s Ryan Rumchaks, Homesafe are set to release their debut album this month. 2016’s ‘Evermore’ EP was enough to gain them some attention from the likes of Pure Noise Records, who will be putting out ‘ONE’.

Lead single ‘Vanilla-Scented Laser Beams’ sees the band dive into 90s pop-punk roots, with their infectious hooks and feel good vibes. The duel vocals of Ryan Rumchaks and Tyler Albertson make for an almost Seaway-esque, or even Knuckle Puck, feel. ‘Run’ follows much the same suit, with Rumchaks taking most of the vocal duties.

As one of pop-punk’s most promising bands around at the moment, Homesafe look set to explode following the release of ‘ONE’. If you’re looking to ride the next wave of great pop-punk, look no further than Homesafe. (BM)

‘ONE’ by Homesafe is released on 29th June on Pure Noise Records.

Modern Rituals – The Light That Leaks In

Bristol quartet Modern Rituals have never really been easy to categorise, nor make quick assumptions about. Their debut EP ‘Stranger Culture’ showcased them as a London-based answer to Title Fight, but underpinning their heavy alt-rock melodies was a grit and unresolved turmoil that never really let you get too comfortable with their sound.

On their debut full-length ‘The Light That Leaks In’, Modern Rituals expands their gothic ruminations into more abstract territory. Evidenced by single ‘Nebulon’, this is an album that’s as concerned about building up tension and unease before releasing them through lumbering grunge riffs, before ending with a rousing group chant. Meanwhile ‘Fog Machine’ is an introspective look into one’s consciousness, searching for control over a haze of different thoughts. And presented through muggy textures of distortion, listening to it is like being trapped in tar, but infectiously catchy tar.

Songs about personal obstacles and the instability of adult life is nothing new, but Modern Rituals communicate that overwhelming disarray on ‘The Light That Leaks In’ through their meandering song arrangements and cloudy production as effectively as they do via lyrics. Long may their penchant for discomfort continue. (AD)

‘The Light That Leaks In’ by Modern Rituals is released on 22nd June on Holy Roar Records.