We’ll admit we were worried that Pianos Become The Teeth may never return. Thankfully, four years from the acclaimed ‘Keep You’, the Baltimore indie post-hardcore make a long overdue comeback this month with ‘Wait For Love’.

Having established a stylistic departure on its predecessor, transitioning to clean vocals and layered instrumentation, it seems ‘Wait For Love’ looks set to follow in an ideal fashion. ‘Charisma’ charges ahead with a fuzzy bassline and Kyle Durfey’ comforting vocals. While ‘Bitter Red’ captures the luscious atmospheric side that previously shined on songs such as ‘Repine’ and ‘April’. Together, they’ve left us yearning to hear what else ‘Wait For Love’ has to offer.

Although they’ve said little about the album, we do know that ‘Wait For Love’ sees the quintet reconcile with their aggressive past and honing in on their songwriting to create a “full realisation” of PBTT. (SR)

‘Wait For Love’ by Pianos Become The Teeth is released on 16th February on Epitaph Records. 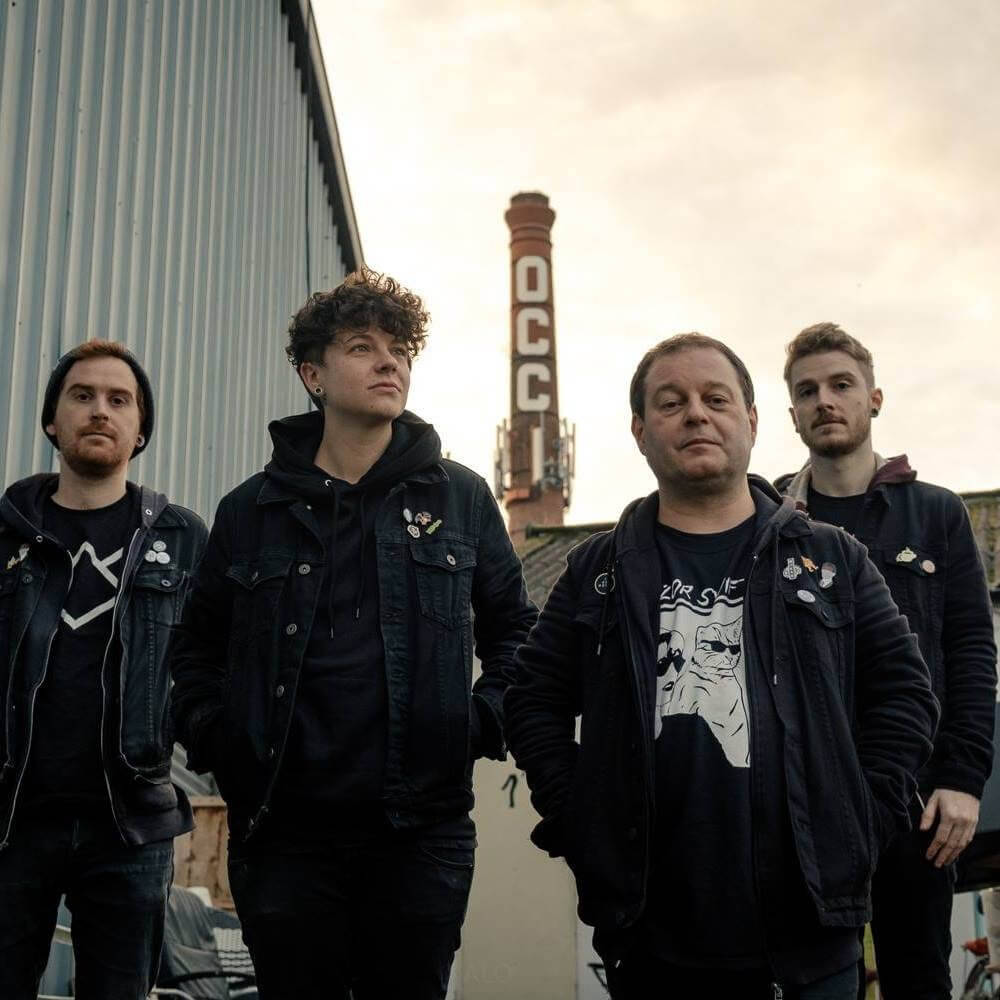 Joined by Tony Ware (Guitar), Phoebe Saunders (Bass/Vocals) and Matt Claxton (Drums), the Brighton-based group are set to release ‘No Discordance’, their debut full-length, this month. With the aim of producing a “huge sounding record”, songs such as ‘Station Approach’, ‘Plague Your Heart’, ‘Sometimes Dead Is Better’ and ‘300 Cigarettes’ deliver on that goal through fuzz-filled, soaring hooks. While Boniface’s sentimental and honest lyrics bring an element of sophisication to the controlled chaos.

With hints of The Get Up Kids, Saves The Day, and The Replacements, Harker brilliantly blend the past and the present on ‘No Discordance’. (SR) 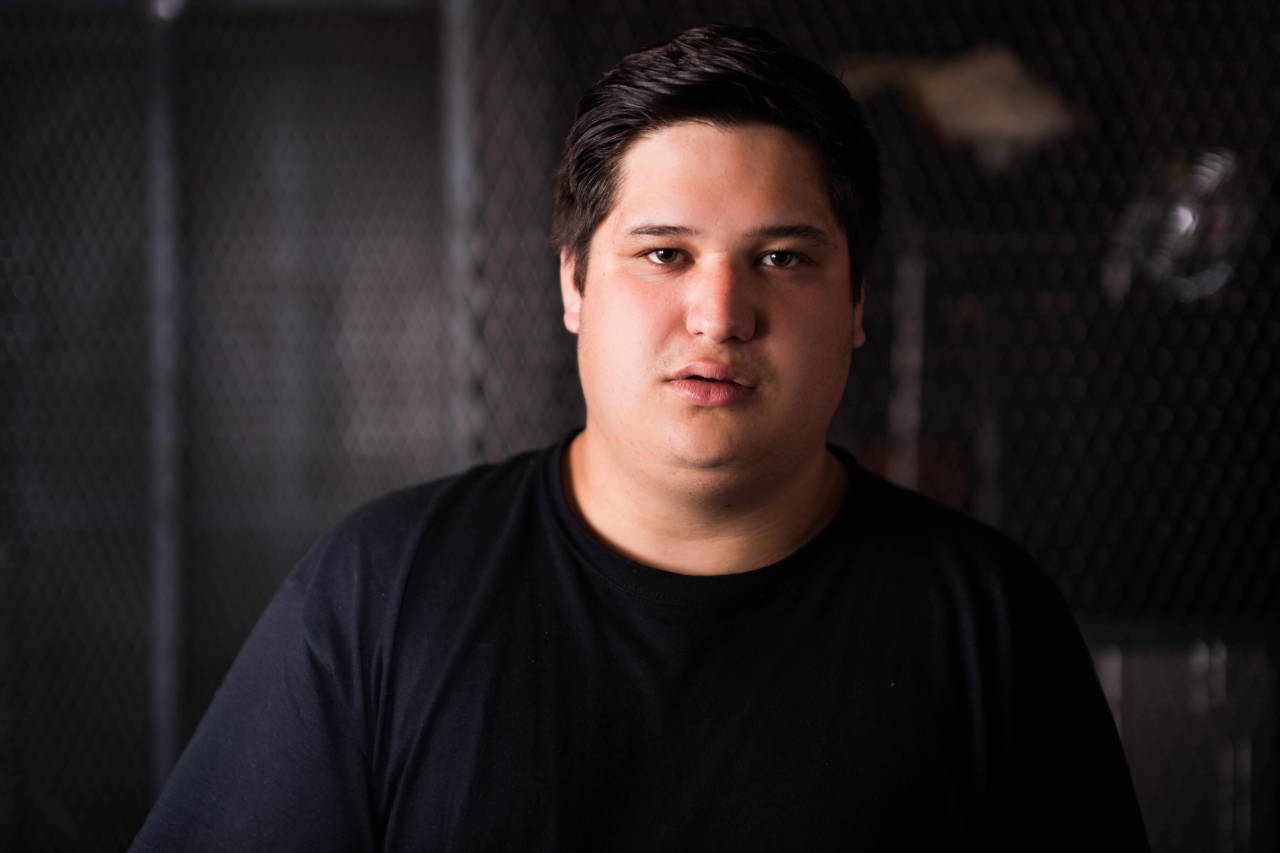 The spoken-word/emo project of Cam Smith may have released its latest album back in October, but Hotel Books’ ‘Equivalency’ is only now getting an official European release following their signing to Hassle Records. Serving as the follow up to 2016’s ‘Run Wild, Stay Alive’, the project’s latest offering delivers more gut-wrenching emotion vocalised through Smith’s poetry.

‘Van Nuys’, and ‘Celebration’ were the first two songs to drop, with the former first gracing us with its presence back in late 2016. Driven primarily by Smith’s unique, cracked vocals, the songs build up to huge, full-band choruses that feel as grandiose as they do emotional. The rest of the album follows this style, as Cam Smith leads us on a thirty-minute journey, reflecting on the role of the artist and his internal struggle of trying to differentiate his art from entertainment.

‘Equivalency’ as a whole is an impressive piece of work, an anthology of gripping poetry that will entice as many new Hotel Books fans as it will please die hard ones. (BM)

‘Equivalency’ by Hotel Books is released on 9th February on Hassle Records. 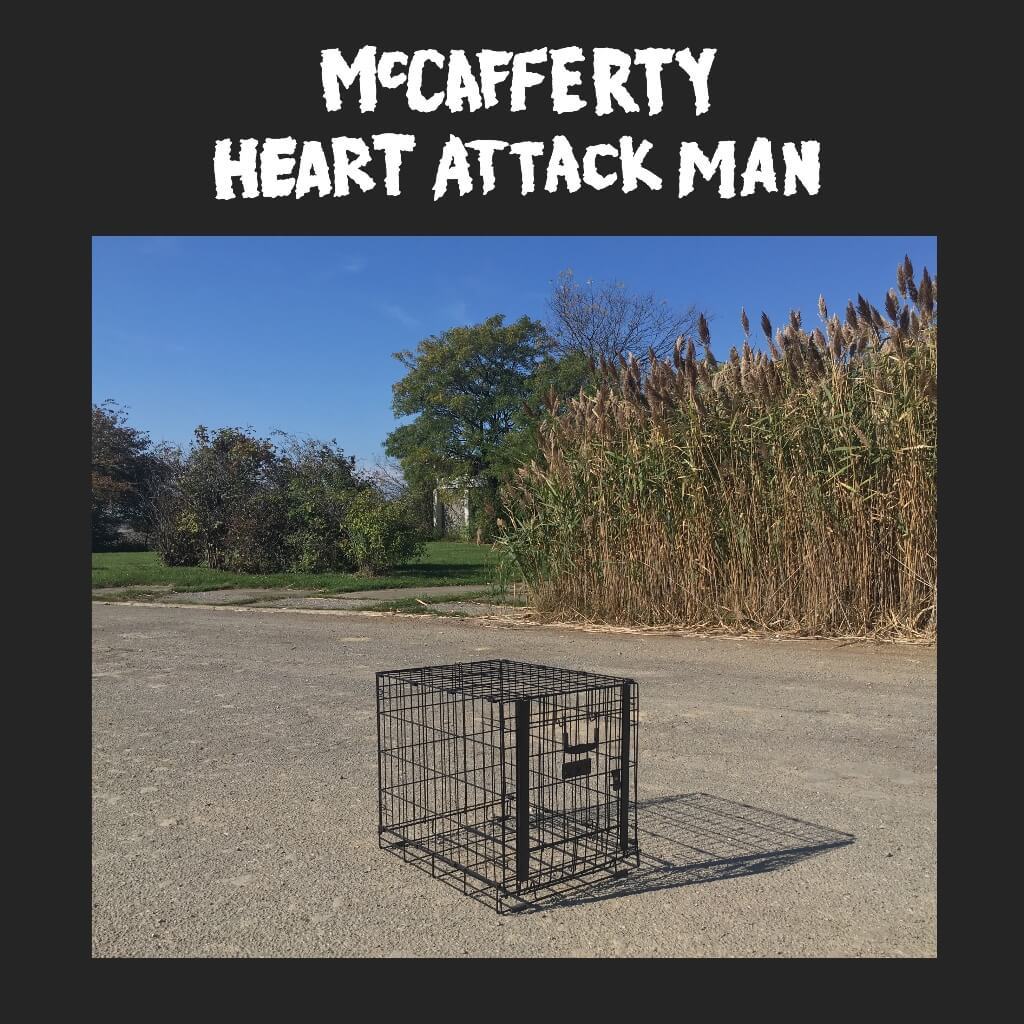 Two of indie/punk’s finest acts have teamed up to produce one of the greatest splits to come out of the genre. McCafferty and Heart Attack Man seamlessly weave together five tracks that showcase the very best of what each band have to offer.

Side A is fronted by McCafferty, and sees the band build on their last album, ‘Thanks. Sorry. Sure.’. Opener ‘Finally’ demonstrates an almost summery, anthemic side to the band, with bright melodies and plenty of ‘woah-ohs’. ‘What Cannot Be Said, Must Be Wept.’ slows it all down to a pace more typical of emo, until it erupts into a huge final third, and ‘Fountain’ rounds McCafferty’s half off with a foot-tapping acoustic ballad.

Heart Attack Man’s side begins with ‘99% (Comfortable)’, a two-and-a-half minute track that offsets lyrics of emotional instability with upbeat instrumentation, before unleashing all Hell in the final chorus. Their second offering, ‘100mg (Millenial)’, continues this trend while providing the catchiest song on the whole EP.

A split as strong as this can be rare. Across the five tracks, both bands manage to remain consistent with each other, while also adding their own flair to each song. Any fans hungry for music from these two bands should feel quite full after consuming this split. (BM)

‘Split’ EP by McCafferty/Heart Attack Man is released on 2nd February on Take This to Heart Records/Triple Crown Records. 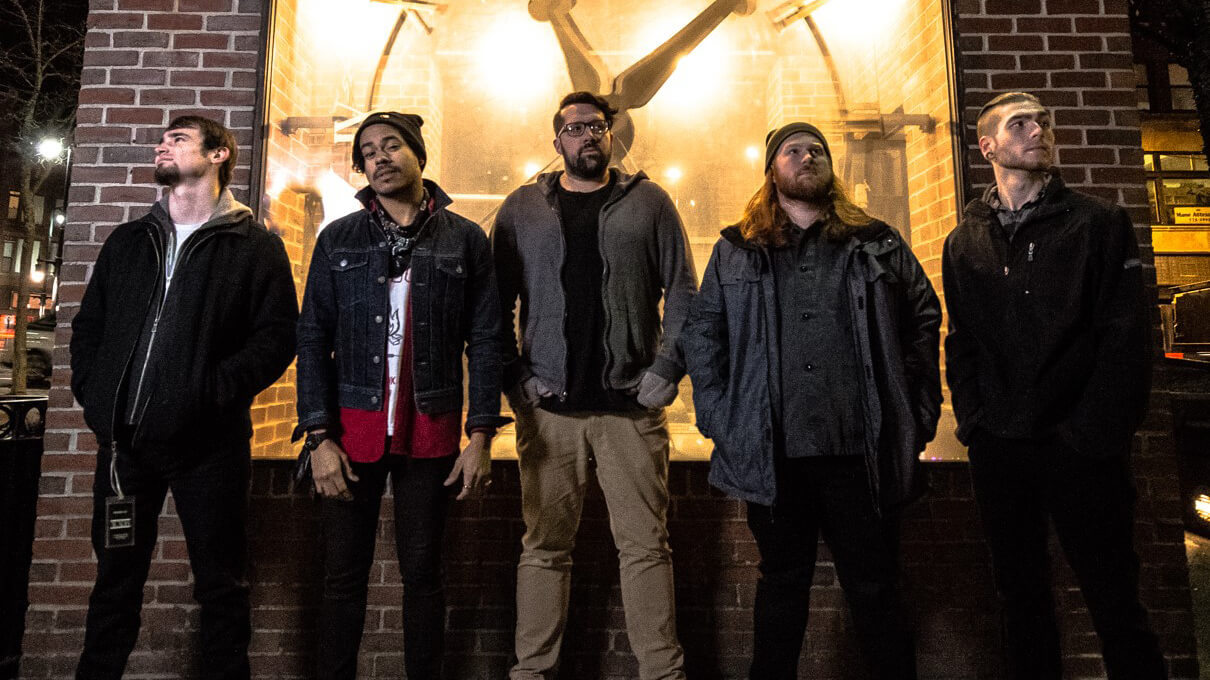 Alt-rock quintet Acadia were chosen as one of our 25 bands to watch in 2018 last month, and now they’re set to release their second EP, ‘All Heart’. Containing six tracks, it should take the Portland, Maine to the next level.

From the moment we heard ‘Dryspell’, it was clear Acadia had something special, and ‘All Heart’ does not disappoint. From the opening, haunting piano keys playing ‘When the Saints Go Marching In’ on ‘Raymond Arthur’ to the rousing ‘All Heart, No Feeling’ to the passionate acoustic ballad, ‘Callisto’, frontman Jameson Trudel and company lay it all out in the open through a set of lyrically raw songs.

Acadia have pulled our heartstrings and in the coming weeks, they’ll be pulling yours too. (SR)

‘All Heart’ EP by Acadia is released on 2nd February on Innerstrength Records. 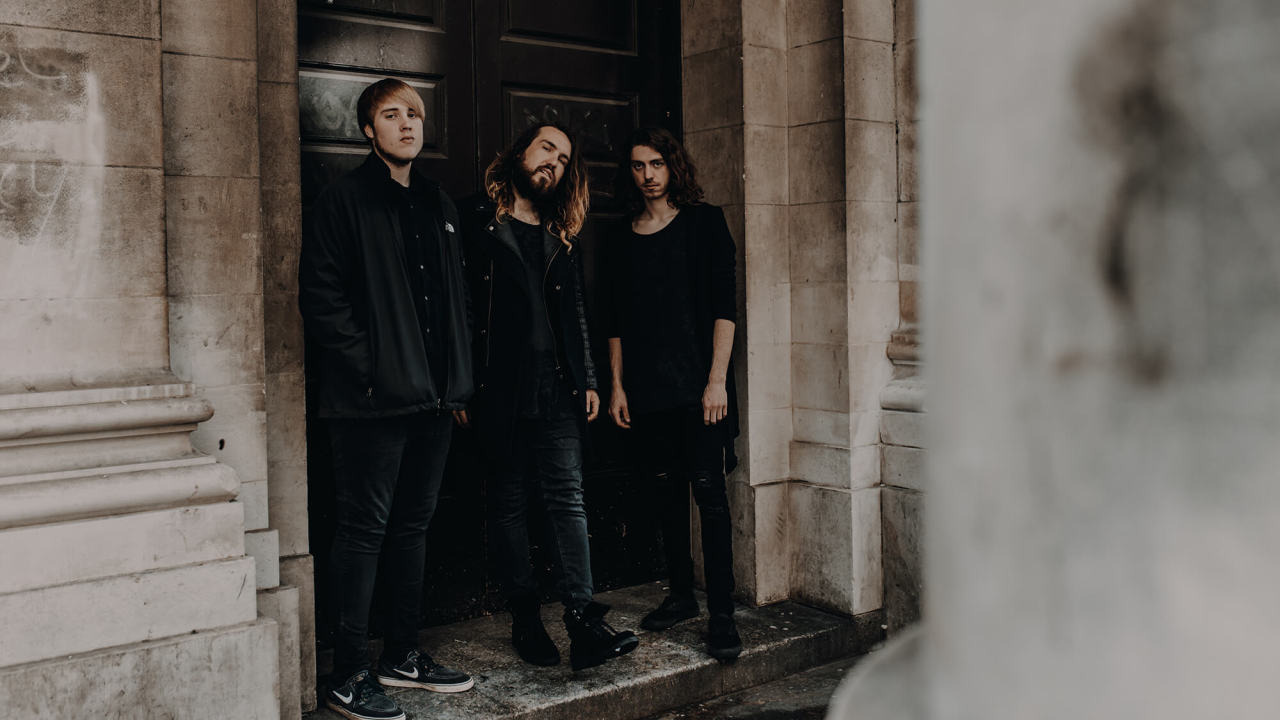 Upcoming British trio Winchester look set to make a bit of a splash with their eclectic sounding debut album ‘Life Begins at These Dead Ends’. They combine elements of technical metal, raging metalcore and a melodic alt-rock sound under the broad umbrella of post-hardcore as they draw on influences like Funeral for a Friend, and Architects.

Produced by Dan Weller (Enter Shikari), ‘Life Begins at These Dead Ends’ is armed with a stack of hard-edged riffs and a well thought out approach to songwriting. The one time music students are taking a serious stab at making a name for themselves on the UK scene. If the teaser ‘Life Begins’ is anything to go by they are certainly in with a shout, especially as it looks like plenty of work and a lot of thought have gone into what they do. Definitely worth keeping an eye on. (EL)