“If I…” with Set Things Right 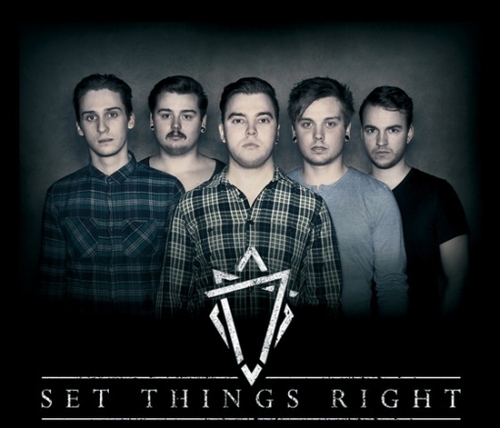 With their recent single, ‘Don’t Close Your Eyes,’ rising Belgian metalcore band Set Things Right have produced a focused, hard-hitting yet accessible number that is bound to get them noticed in the coming months.

The Antwerp band recently took some time out to take part in our “If I…” question where all five members; Tom Welslau (vocals), Jos De Roeck (Bass), Kristof Du Jardin: (guitar), James Falck (guitar) and Maarten De Roeck (drums/samples) told us which bands they’d like to play with, who would play their ideal festival and much more.

If your band would like to be featured as part of “If I…” full details can be found here.

If I could re-live one tour/show it would be…
K: Jera On Air!

James: Jera On Air last year, even though I didn’t play it. Looked insane though!

If I had the chance to play one venue it would be…
K: I’d love to play at Brixton Academy, it’s an amazing cool venue.

Ja: In Belgium: This venue called Ancienne Belgique in Brussels. Definitely the biggest venue for our genre of music. That or Sportpalais with Lady Gaga, gotta fly high.

If I could play with one band it would be…
K: I’d like to play along with Parkway Drive.

M: A Day To Remember

T: A Day To Remember.

If I could play with any person living or dead it would be…
K: John Frusciante

Ja: Johnny Cash, all the way, or Michael Jackson, so he could teach me how to move on stage.

If I could bring back any band that have split up, it would be…
K: Pendulum

M: Burden Of A Day

Jo: Burden Of A Day

If I wasn’t playing music, I would be…
K: The Weather guy.

Ja: I’d probably be handing out free toilet paper for a living.

T: Be a Pro Basketball Player

If I could play a different genre it would be…
K: Soundtrack for movies and games.

Jo: Hip Hop but only if I could Rap.

Ja: Either some sort of easy listening alternative music like Alt-J or Bon Iver, or progressive metal like Tesseract or Veil Of Maya.

If I could have written any song it would be…
K: ‘Danger Wildman’ by The Devil Wears Prada.

M: ‘Elephants’ by Our Last Night.

Ja: Probably ‘Assistant To The Regional Manager’ by The Devil Wears Prada or ‘Landlocked Blues’ by Bright Eyes.

If I could have written any album it would be…
K: ‘Thirteenth Step’ – A Perfect Circle.

If I could headline any festival, it would be…
K: Rock Am Ring.

If I could organise my own festival, the bands playing would be…
K: A Perfect Circle, Bring Me The Horizon, Set Things Right, Northlane, Parkway Drive.

J: A mix of different genres; Slipknot, Sigur Ros, Underoath, Nick Cave and The Bad Seeds. GWAR would have to make an appearance, and Set Things Right, of course.

If I could play any other instrument, it would be…
K: Cello.

If I could give one piece of advice to a new band, it would be…
K: Keep at it, never ever stop, dare to take risks!

M: Working hard is not dreaming, dreaming is working hard.

Jo: Do your goddamn thing, Be a shepherd and never be a sheep!

Ja: Make sure you have the means and the will to do what is necessary if you want to take your band seriously. A lot of sacrifices need to be made to get far and you have to be ambitious as well as everyone else in the band, otherwise it will never work.

T: Stay motivated and keep believing in your own music!

If your band would like to be featured as part of “If I…” full details can be found here.