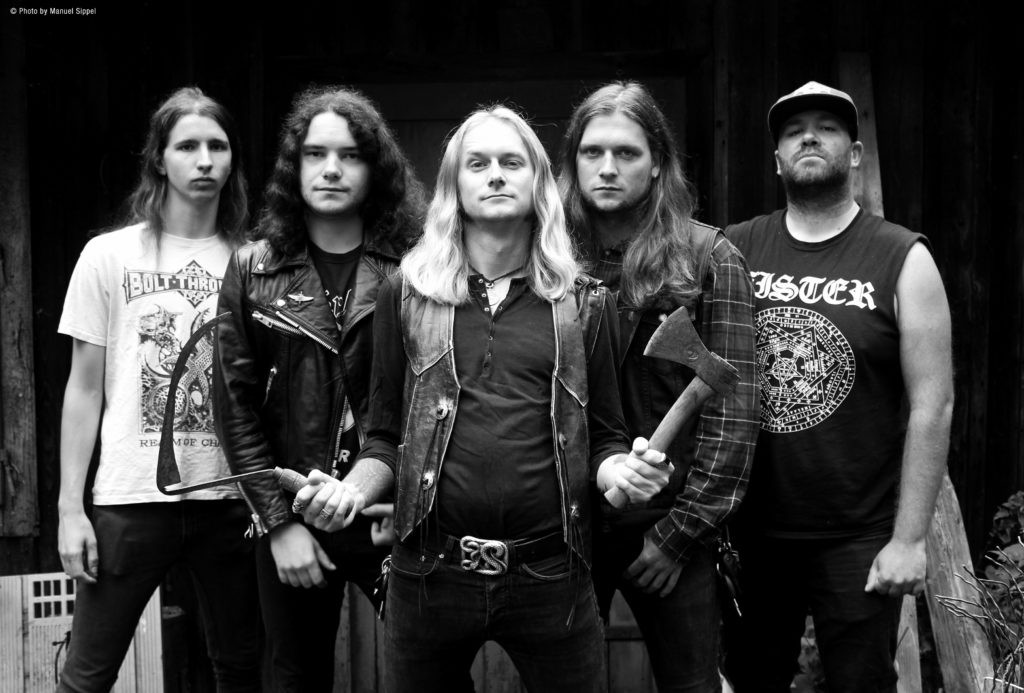 For many aspiring rock stars, they dream of becoming guitarists yet for Tom Michalik, he targeted picking up the sticks and becoming a drummer. Nevertheless, he now finds himself part of Deathrite, a death metal band based out of Dresden, Germany.

The road from wanting to drum to becoming Deathrite‘s second guitarist is the result of various factors; his parents and watching TV. “Honestly, I wanted to become a drummer and wasn‘t very interested in playing guitar at that time,” Tom explains. “My parents gave me a small acoustic guitar on Christmas Eve when I was five years old. I wasn’t overly excited, but after a few weeks I felt comfortable with the instrument, so I continued.”

Having begun his guitar journey on an acoustic guitar, the step up to an electric guitar was a case of style over substance. “It as a cheap Stratocaster replica with a humbucker in it,” recalls Michalik as he reminisces about buying his first electric guitar from a small, local store one birthday. “Back in those days, I had no idea what I bought. I just wanted a cool looking electric guitar.”

Although Michalik was casually playing guitar, it wasn’t until he witnessed performances on MTV or WDR Rockpalast (a German TV show) that he realised the potential of what it could do. “I was fascinated by the variety of sounds and all the possibilities you can accomplish with an instrument like this. So I wanted to be like them,” Tom tells us.

When it comes to influences, Tom didn’t have to look far with bands such as Scorpions, UFO, Accept, Electric Sun, Helloween and Die Toten Hosen often being regarded as leaders in German rock. Michalik cites people such as Uli Roth (Scorpions) and Michael Schenker (Scorpions, UFO) alongside overseas names Fast Eddie Clarke (Motörhead) and Frank Marino (from Canadian hard rock band Mahogany Rush) as his guitar heroes as they all have a “big blues influence”.

Following periods as part of heavy/thrash metal bands Toxic Beast and Tension, Michalik would become a member of Deathrite after a chance meeting with vocalist Tony Heinrich. “I met Tony in a pub in Leipzig and we became friends. After a while, I tried to play with them and decided to stay and we quickly started to write songs for ‘Nightmares Reign’.”

For Deathrite, the addition of Michalik and incoming bassist Anton Hoyer marked a new chapter for the Dresden group. Formed in 2010 by drummer Stefan “Beff” Heinz, Tony and his brother, guitarist Andy Heinrich. Inspired by the pissed off attitude of punk and hardcore, the band’s early work would embrace the buzzsaw sound to produce their own brand of raw death metal. Following the usual turnover of members coming and going, Michalik and Hoyer joined the band in early 2018, just as Deathrite were signing a deal with Century Media Records.

With a new label and new members came a new album. The aforementioned ‘Nightmares Reign’, released this past November, signals a shift in sound for quintet taking a more accentuated and vigorous approach. From the murky sludge opening of ‘When Nightmares Reign’ to the old school thrashing of ‘Invoke Nocturnal Light’ and ‘Bloodlust’ and beyond, it’s a gritty record with hints of versatility.

For founding guitarist Andy Heinrich, the addition of Michalik proved to be beneficial. “It was really exciting because it was a totally new kind of sound and I am playing with new musicians with different skills,” says Tom when speaking about playing with the band for the first time. “I think Andy got used to it too because he never played with a second guitarist in Deathrite before. So for all of us, it was an exciting time.”

As expected, having a second guitarist has allowed Deathrite to explore the use of more dynamics and leads while honing in on a desired and uncomplicated sound. “We wanted a warm, analogue sound, so we decided to get back to basics with the classic Marshall sound and a little bit of boost in front of it, like most of the bands sounded in the 70s,” Tom explains. “It allows you to have the full control and dynamics by just picking the strings more gently or harder or turning the knops on the guitars, depending on what you want to play. That’s the way I like to play guitar.”

Even though on the surface ‘Nightmares Reign’ is considered a death metal record, Michalik suggests it’s more than just that, labelling ‘Obscure Shades’ and ‘Temptation Calls’ as “very versatile songs”. He also highlights ‘When Nightmares Reign’ as his personal favourites due to its pure rock n’ roll simplicity. Nevertheless, the eight songs that make up the record are threaded together by a thorough heaviness in the bands sound.

For Tom, the making of the record allowed him to gain a better understanding of what he calls the “dissonances” of songwriting; the jarring combination of unfitting notes, yet he justifies by saying “we wanted to sound dark and scary in a particular way.”

Deathrite‘s style and influences are founded on those known to use the Boss HM-2 Buzzsaw pedal. It was used by bands who wanted a “dirty, rotten” classic death metal sound in the 90s with even Deathrite‘s Andy Heinrich using the pedal on their early work. Nevertheless, the addition of Tom and the bands willing musical exploration sees them abandoning the use of the pedal on ‘Nightmares Reign’, in favour of the “easier” Ibanez TS808 Tubescreamer.

For Michalik, its part of an uncomplicated setup that includes his Orville (Gibson) Les Paul Custom guitar, a Marshall JCM 900 amp, a plate reverb, along with Dunlop CryBaby and Boss RE 20 pedals. “I prefer Les Pauls from Gibson/Orville/Epiphone, because I like the design and how it feels soundwise and playwise. They are great tone machines. Andy uses his Gibson Flying V. We keep it simple and because we like the sound.”

In closing, Tom has firmly transitioned from his drumming dreams to axe playing master, even though he’s humble when asked about where he’d like to elevate his skills; “I just want to improve myself in playing guitar. Nothing fancy.”

‘Nightmares Reign’ by Deathrite is out now on Century Media Records.