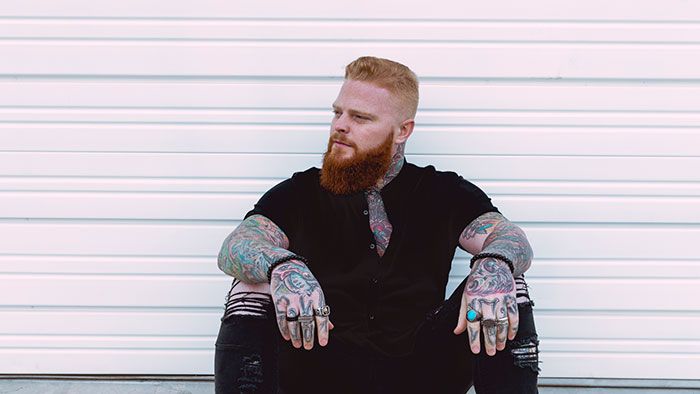 “Playing guitar was a way to get out my emotions. It was definitely my rock growing up”

Throughout the history of guitars, there has been a plethora of models and styles that have gone on to be influential. The Fender Telecaster, the Gibson Les Paul, the Rickenbacker 360/12 and the Gretsch 6128 are amongst some of the most iconic guitars, spurring on generations of new guitarists. However, for Lee McKinney it was Gibson’s Flying V model that drew him into picking up the axe.

Growing up in the northwest suburbs of Chicago, McKinney spent his teenage years going back and forth between his separated parents and moving schools. Like many youngsters, he found comfort in music which gave way to McKinney‘s hunger to play guitar, and own a Flying V.

“It was players like Eric Johnson and Dimebag Darrell that made me really want to pick up the instrument,” Lee tells us. “When I was 10 I made my Christmas list a picture of a Gibson Flying V guitar and I ended up getting it.” From there on, he sought out a tutor in the Windy City, routinely taking lessons for five years along with practising for hours every day. “It was my constant growing up. Playing guitar was a way to get out my emotions. It was definitely my rock growing up.”

Like dozens of other aspiring guitarists, McKinney looked up to some of the most highly regarded axe players, names such as Randy Rhoads, Steve Vai, Yngwie Malmsteen, Steve Ray Vaughan, and Joe Satriani. Although Lee would split his family time, he gives credit to his dad for feeding his musical diet.

“My dad used to repossess cars. When people didn’t come to pick up their belongings or if a car went off to auction to get sold, he ended up with a “junk” storage area. There were tons of CDs. I feel like I got most of my music from there.”

By 2007, Lee joined a local metalcore band, Born of Osiris, and would sign a deal with Sumerian Records shortly after his 18th birthday. With syncopated riffs being wrapped around prog and technical death metal elements, 2009 debut full-length ‘A Higher Place’ proved to be a success for the band. In the years and releases that followed, McKinney’s impact on the band led to more focus on melody, seamlessly combining with the band’s use of keyboards, synthesisers and programmed electronics.

Away from the studio, BoO would tour profusely with names from the metal scene. Some would have an effect on McKinney. “I look up to a lot of my friends/acquaintances in the music industry,” he says citing names such as Intervals, After the Burial, Veil of Maya, Plini, and David Maxim Micic.

Having grown up in his early twenties as part of Born of Osiris, it seems McKinney‘s approach on how to play guitar has changed, preferring substance over speed. “I sometimes feel that my 18-year-old self was a ‘faster’ guitar player for whatever that’s worth. I know I’ve completely grown in every way as a songwriter though. I want to write music that will last much longer than my time here on earth,” Lee explains. “I think I get older and wiser with the guitar, but I know when I was younger and only cared about speed and technique I might have been more flashy.”

McKinney‘s style has become more considered, and while being part of Born of Osiris has led him to explore his songwriting abilities, he still had a hunger to flex his creative muscle. This past April saw him release a solo instrumental record – ‘Infinite Mind’. The album allowed Lee to tap into a number of varied musical styles, giving him creative free reign.

“When I can make my guitar the lead instrument in a song, it opens everything up. In Born of Osiris, I have to balance my instrument with insane drums, tons of key layers, bass, two vocalists, etc. I could do whatever, or however, I wanted. It was the most freeing musical experience of my life.”

Throughout ‘Infinite Mind’, McKinney vibrantly shows off his guitar virtuosic skills, combining it with warm, atmospheric soundscapes that effortlessly go from motion to the next. While it’s a thoroughly guitar-centric record, tracks such as the rich opener ‘A Clock Without A Craftsman’ with its rapid fret play is complemented by a sumptuous saxophone, courtesy of Mars Volta multi-instrumentalist Adrián Terrazas-González. “It’s just a gorgeous timeless instrument in my opinion,” says Lee when asked about its inclusion.

By writing and producing a dynamic record, it led to Lee to take a step back on songwriting rather than hone in on his guitar playing. “I think I had an idea of some things I wanted to try but until I started making it and letting the music flow out of me, I realized I was somewhat of a passenger to the songs and ideas,” he reveals. “I think it’s easy to get caught up in forcing an idea you had sometimes. When you aren’t forcing an idea, everything comes naturally and with integrity.”

“When I can make my guitar the lead instrument in a song, it opens everything up.”

Within the guitar community, McKinney has become a recognisable name. Although he’s no longer playing his beloved Gibson Flying V – “It was a 3/4 size guitar, so upgrading was a must as I got older.” In the years since then, McKinney has played various guitars including the Ernie Ball MusicMan JP7 and JPXI models. However in 2014, Kiesel Guitars began working with McKinney. Together they began developing a signature guitar for Lee. First the LPM model before releasing the LM6X and LM7X headless guitars late last year.

On the origins of its creation, Lee told us, “Jeff [Kiesel – Kiesel Guitars Vice President] sent me a headless guitar called a Vader. I fell in love with the lightweight and shorter body. I brought the guitar everywhere because it took so much less space. I think changing strings on it is a trip at first but now that I’m used to it, I’ll never play a guitar with a headstock again.”

The guitar consists of chambered swamp ash body with maple neck, 4A flamed maple top, stainless steel jumbo frets, a Kiesel-designed Hipshot tremolo, McKinney’s Illusionist bridge pickup, Kiesel Lithium neck pickup, and acoustic bridge saddles. “I wanted a very revealing, spanky, honest pickup,” states Lee. “You can hear everything with this pickup. I wanted it to be aggressive when it needed and clean and clear always. It really reacts to your hand. If I play aggressive, it snarls. If I play clean, it sings.”

Having been with Kiesel for five years, McKinney now considers them family. “Kiesel brings constant forward progression. Jeff is always striving to make better instruments,” he enthusiastically says. “He doesn’t get comfortable like everyone else does. Jeff is never stagnant. He is constantly pushing the boundaries.”

Besides his Kiesel guitars, Lee uses Fractal Audio Axe-FX processor unit, favouring the Axe FX 3 on stage with the FX 2 becoming his studio preference. “I used my Axe Ultra until it had no more buttons left on it and sounded like it had loose change inside,” he recounts while going through his current run down of equipment that includes Antelope Audio interfaces, Focusrite interfaces, Genelec Monitors and a custom built computer.

As a touring musician and guitar collector, Lee was on the receiving end of a house burglary shortly before the release of ‘Infinite Mind’. The incident happened while he was on tour and amongst the stolen items was several guitars (Walnut LPM7, Honey V6X, Monster O7X, Sea Foam VB5). Thankfully due to the support of Kiesel and Sumerian Records, McKinney has been able to be back in the studio and out on the road.

“The support from everyone has been unbelievable. The fans have reached out and even looked around in their local area for my guitars,” says an appreciated McKinney. “Sumerian made sure I was immediately back up on my feet in my recording studio, so I didn’t skip a beat. Kiesel sent me a new bass and a couple of other things to make sure I had what I needed. Sumerian and Kiesel are legitimate family. And the fans are the reason I get to do this. Their support is everything.”

Having released his debut solo album alongside Born of Osiris‘ fifth album, ‘The Simulation’, McKinney is resting before the band head to Australia in June. Nevertheless, it seems he’s thinking further ahead and he ponders the possibility of taking ‘Infinite Mind’ on the road. “I would like to perform with a sax player, an orchestra, and a pianist live. It would have a drummer, bass player, and second guitar player as well. I’ll work up to that I’m sure.”

‘Infinite Mind’ by Lee McKinney and ‘The Simulation’ by Born of Osiris are out now on Sumerian Records.