If you have ever listened to Polyphia, then you’ll be aware of the guitar wizardry that founding members Scott LePage and Tim Henson have been producing for the best part of eight years. Their latest album, ‘New Levels New Devils’ is a colourful exhibition of genre-fusing, technical guitar playing. Alongside bassist Clay Gober and drummer Clay Aeschliman, the Texas quartet display an effortless blend of djent, prog, hip-hop, funk, trap, and EDM. Ultimately, it sees LePage and Henson explore their guitar virtuoso skills, resulting in a dynamic and compelling sound.

For Scott, his love for music was firmly embedded from an early age. “My dad has been playing the guitar since he was a teenager, and when I was around ten years old I started showing an interest in it so he taught me how to play,” explains LePage. “When I was a kid I always used to think it would be badass to be good at guitar, and I kind of just stuck with it and worked my ass off trying to get good.”

“I knew I wasn’t going to keep skateboarding because I sucked, and the guitar was kind of my thing that I was good at for my age so I wanted to stick with it.”

It’s easy to see why his father became an early guitar hero for Scott as they bounded from the very time he picked up a guitar. Scott tell us, “one day I just walked into the room where my dad kept all of his musical equipment and he was playing this sick Charvel he had, and I remember saying the words ‘I want to be able to play like that,’ and he then taught me the pentatonic scale and the rest was history.”

As Scott grew up, he would find an admiration for influential metal guitarists such as Pantera’s Darrell “Dimebag” Abbott and Metallica’s Kirk Hammett and James Hetfield (“I loved Metallica so much”). Like many teenagers, LePage found himself at a crossroads. With his hobbies alongside the guitar consisting of skateboarding and playing video games, he realised he’d have to give the former up if he were to pursue a music career.

“I knew I wasn’t going to keep skateboarding because I sucked, and the guitar was kind of my thing that I was good at for my age so I wanted to stick with it. One thing I think I always knew was that I’d be doing something with music, and I remember thinking ‘what if I break my fingers skateboarding and can’t play anymore,’ so I just kinda stopped one day. That was the same day I decided it was time to actually take the guitar seriously.”

Under the tutelage of his father and a nearby neighbour (“Shoutout Earl Bailey, RIP”), Scott expanded his range as a guitarist, learning modes and arpeggios. The latter would eventually become a signature technique in Polyphia‘s sound.

While Polyphia‘s early work such as 2013’s ‘Inspire’ EP was executed with a metallic edge, LePage’s other influences would emerge as the band developed, adding a hint of blues-rock to their sound as he counts Stevie Ray Vaughan, Joe Satriani and Steve Vai amongst his guitar heroes.

“I do a lot of slides and hammer-ons/pull-offs, which is a strong symptom of the pentatonic scale, well it is in my case, and quite a bit of tapping and hybrid picking just because I think it’s badass,” explains Scott when asked how to define his style. “As far as the actual style is concerned, I’d say it’s still pretty metal influenced just because I grew up listening to that, so it’s kind of embedded within me as a person in general, but I also really dig that whole bluesy clean tone with a dirty drive, neck pickup on a strat, twangy soul-sucking Stevie Ray Vaughan guitar sound that makes you want to quit your day job and play music forever.”

In a band that is heavily based around two guitarists, Scott and Tim Henson have found a dynamic that complements each other. “Tim has a slightly different style in the sense that he likes to chord out his melodies and play everything in one guitar part,” LePage clarifies. “I like to spread them out to create more of a dimension. The Clay’s just work so perfectly with the stuff they write over the guitar parts, so it’s not hard to write cool stuff with them.” 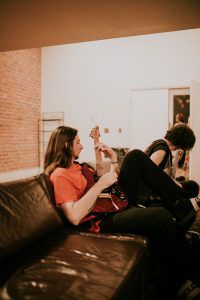 Throughout their career, Polyphia have shown a willingness to collaborate with outsiders and ‘New Levels New Devils’ is no different. Even though they didn’t happen face to face, sending tracks back and forth with names such as All Shall Perish’s Jason Richardson, Ichika, Mateus Asato, Yvette Young (of Covet) and Erick Hansel and Mario Camarena (both of CHON), got LePage’s creative juices flowing.

“It’s always sick when you get that email and throw their part on the track and hear it for the first time. Sometimes it even inspires us to write more under it.”

While the collaborations allowed them to make “dope music with our friends”, it also pushed both LePage and Henson. “We always keep in mind the feel of a song before we consider who it would be cool to feature on it,” explains Scott. “With ‘Nasty’, we kind of wrote all the parts to be super hard, and we thought Jason would be a good candidate to completely obliterate it. For ‘Drown’, we knew Mateus would be able to bring that one to the next level, and ‘Yas’ is kind of upbeat and uplifting so we knew Mario and Erick would slay that track.”

Undoubtedly, ‘New Levels New Devils’ is more than four friends creating complex sounds. Besides the numerous guest spots, the cast of collaborators saw Polyphia work with a variety of producers including hip-hop/trap specialists Y2K (Killy, Yung Bans) and Judge (Migos & Marshmello, blackbear, Young Thug). “Working with different producers is really what pushes us to be on our absolute A game, considering the challenges of actually writing music we think is cool over insane production,” states LePage.

As previously stated, ‘New Levels New Devils’ takes in a wealth of sounds and styles as Scott is eager to explore his ability as a writer. “That’s really my main focus now, I just want to be able to write music to as many genres as I can.” It’s the latest in a series of musical adventures Polyphia have gone on. From pop (2015’s ‘Muse’) to EDM (2017 single ‘Lit’) to the trap/hip-hop stylings of last year’s ‘The Most Hated’. While Scott considers ‘New Levels New Devils’ as “a more mature and developed approach on trap/hip-hop.”

When it comes to discussing the gear he uses, Scott speaks fondly of Ibanez. Although he’s now endorsed by the Japanese company, his admiration goes back to those teenage years. “My first guitar was an Ibanez SA that I bought during one of those crazy guitar centre clearance sales” he recalls. “It was $300 marked down to $200 and it was all black with a rosewood fretboard and maple neck. I picked it up and knew right away that was the guitar I’d be walking out the store with.” Even though he has gone to play various models since, that first Ibanez SA has a sentimental value to LePage, eventually using it to test out different tunings and string gauges.

Fast forward to the present, and Scott’s admiration for Ibanez remains. With ‘New Levels New Devils’ honing in on a cleaner, melodic sound, LePage would use their Ibanez AZ and Talman models with Fractal Audio’s AXE FX II preamp/effects processor to produce the desired result.

“It’s super easy using the AXE-FX and it has pretty dope preset tones on it, so we like using that a lot because it helps the workflow go a lot quicker. All I have to do is plug my guitar in and turn everything on and I’m ready to record, and that has absolutely helped me get out my ideas as quickly as I can before they disappear.”

Between the two models used, Scott’s preferences lean towards the AZ’s, citing their versatility, aesthetics and their “sick tremolo bar”, a key requirement of his. “I really need a tremolo bar and they never go out of tune on the AZ’s, even when I completely beat the hell out of it, which I totally do. I also really like a guitar that has a super smooth neck so I can bounce around all over the place.”

Throughout ‘New Levels New Devils’, tracks such as ‘Saucy’ and ‘So Strange’, LePage exhibits a blend of sun-soaked grooves and fretboard flickery, executed with precision. For him to pull off such a skill, he explains his preferred pickup configuration as a “Humbucker on the bridge and single coils in the middle and neck.” Scott also goes to explain his love for 22 fret guitars, “you can place that neck pickup in the perfect spot to get that warm, deep badass tone – the one that’ll make you quit your day job.”

With an expanding arrange of tones, styles and skills, you’d hope LePage has hopefully quit his day job by now. Along with the other members of Polyphia, and their cast of collaborators, they’ve created space to grow even further as mentioned his need to practise hybrid picking and make use of the pedals he has sat at home. “I really have to get on my pedal game. Next time maybe I’ll have a whole rig for effects pedals,” he closes with while teasing another direction for the band. “The next album could be a country Polyphia album, who knows…”