Guest Blog: ‘What’s it like to be an all-female band?’ – The Definitive Answer by Screech Bats’ Esme Baker 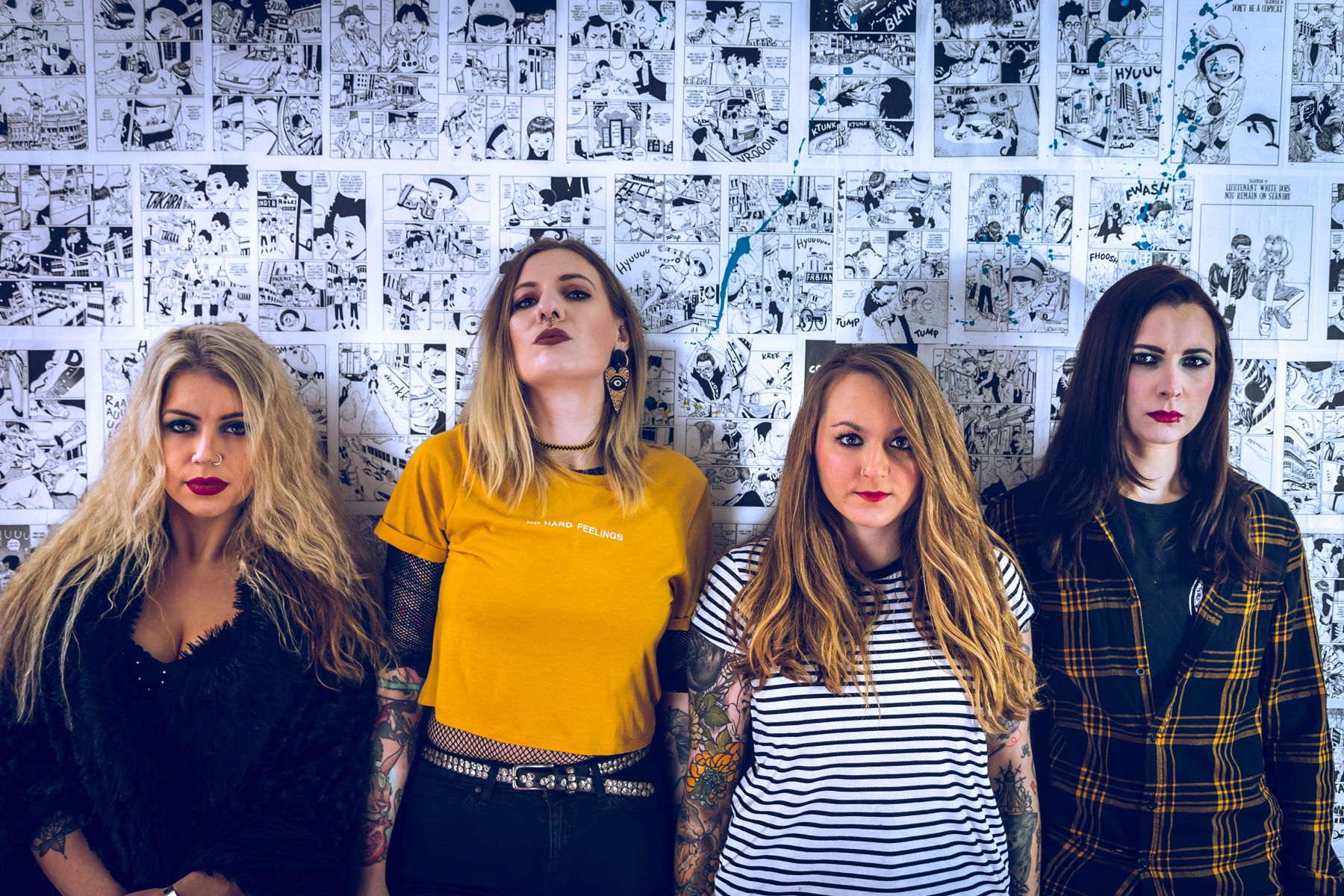 As part of our Guest Blog series, we have handed over our digital platform to Esme Baker of London punk rock quartet Screech Bats. On their recently released EP, ‘Wish You Were Her’, Baker along with drummer Lexi Clark, bassist Rio Hellyer and drummer Kit Reeve, take their grungy riot girl brand of punk rock down a darker route. Covering a variety of topics; mental health, death and grief, failed relationships, and the life lessons that are thrown at you as you grow older, ‘Wish You Were Her’ is drenched in emotion and energy. While songs such as ‘Get Better’ and ‘Just Like You’ have stylestic nods to Alkaline Trio and Against Me!

Although Screech Bats show plenty of lyrical depth, some people unfortunately can’t look past the fact that they’re a non-male band. For any band with a new release, Screech Bats have seen the usual, routine (and lazy) questions being thrown at them; “tell us about the EP?”, “Why is it called that?”, “what inspired this song?” and so on. However, the one question that repeatedly get asked is “what’s it like to be an all-female band?”

Well to lay it all out in the open, Screech Bats‘ Esme Baker has decided to write a detailed answer to what it is like to be an non-male band. Unfortunately, the experiences she and her band mates have been through aren’t pleasant. From being mistaken as girlfriends at their own headline shows to the lack of opportunities they get. Esme doesn’t hold back and her comments are certainly thought-provoking but are certainly needed to be said.

A note from Esme:

This is an article about gender. And let me assure you, I like discussing it about as much as you like hearing about it. But this is what the article is about, so I am going to be unapologetically banging on about all issues regarding wee wees, hoo hoos, who likes what hoo hoo, and how we should all stop giving a fuck for as long as you can be arsed to pick through my flowery turn of phrase for. Let the minge-whinge commence!

I just wanna make music. Like the formation stories of most mainstream bands, I made some friends, they also wanted to make music, we decided to make music together and we started doing it. However, unlike a lot of mainstream bands, none of our members have penises. And unlike a lot of mainstream bands, we won’t get through 90% of interviews without being asked what it is like; to play music, and yet not have a penis. You may think this is strange, having never seen an interview with Sum 41 for instance, that asks, ‘So what’s it like, not having any vaginas in your band?’ and yet with us, it seems to be one of the main topics to discuss. Please don’t get me wrong – it’s totally okay, I mean, although it can become tedious repeating ourselves, none of us mind discussing gender, we would just prefer to be discussing music. So I have taken the time to slosh out once and for all, the definitive article, the article to end all articles, the heavily requested, intensely anticipated, Esme Baker (of Screech Bats fame) and her musings about what making music and not being male feels like and all her thoughts on the commonly posed question: ‘What’s it like to be an all-female band?’

First of all, let me stumble over the starting line and crack my forehead on the very first hurdle muttering something about how we are not an all-female band. I am going to backtrack a bit from my earlier genital statements. I say vagina and penis a lot because I find them funny words to say. Your GENDER is NOT defined by what ORGANS you have. This is the first point people don’t understand, but it’s okay to not understand, I’m right here to clear it up. People misinterpret our statement about ‘not being a girl band’, assuming that we are saying that we are ‘not JUST your average GIRL band, we are GIRLS that ROCK!’ (peace sign/pink anarchy badge/rainbow Tshirt/£50 guitar etc.)

What we ARE in ACTUAL fact saying is; we are categorically NOT an ‘all-female band’. Not all of our members identify as female. We have members who identify as female and members who identify as non-binary. Ergo, it is a misrepresentation to label us a girl/female/woman band. On another point to this – we don’t see it as an insult. We bloody love girl bands. Everything from Kittie to The Franklys to Shonen Knife. We are not offended by the label, it simply doesn’t describe us accurately.

Let’s get into what it’s like to LOOK like, and be mistaken for, an ‘all-female band’ and how this affects the way we are treated. Firstly, we get patronised a lot. Our band members have each been playing in touring bands for between eight and seventeen years, but still, we get told how to set up our equipment as if we are toddlers touching an instrument for the first time. We’ve been asked whose “girlfriends we are?” and informed that backstage is for bands only, even on shows we are headlining. One time, when our bassist was loading in her gear, someone shouted “the stripper’s arrived”. Another time I came offstage from a set, and the first person to talk to me about it was a chap asking me if the reason I wear dark lipstick is ‘to make men subconsciously think of vaginas?’ It’s boring. But it’s a reality for every non-male band out there.

Now lets talk about opportunities. Talent is not lacking in the non-male camp. We are surrounded by extremely talented women and gender non-conforming musicians and artists, especially within the DIY Punk scene. We could name SO many bands that are worth listening to that don’t have male members. However, the difficulty comes when we try to step up to the next level of playing larger venues or getting better tour support slots. In recent years we have become very aware of the lack of diversity at the big festivals. It’s been 37 years since an all-female band headlined Reading Festival (Girlschool in 1981). It’s so difficult to not be pigeon-holed and only get put on at “Female Fronted Nights”. And the only people that are interested in trying to highlight the talents of these musicians seem to be the DIY punk promoters.

Now lets talk about what happens when opportunities DO arise. If we aren’t being booked as a novelty act, or some token fanny to make a show look diverse, we do get a fair amount of opportunities purely because people like our music. That’s great, but it’s always bittersweet because we are constantly having to defend ourselves from the torrent of people, including friends of ours, telling us that ‘we only got that gig because we ‘are women’. Here is a direct conversation with a chap I consider a close friend after we got invited to do the BBC Radio Introducing Live Lounge with Melita Dennett:

Friend: “You only got that because you’re women.”

Me: *Uncomfortable laughter and attempts to brush off mean comment*

Friend: No, I’m serious, you know you aren’t nearly as good as most male bands we know. She just wants women on the show. You would have never gotten that if you were all blokes.

What the fuck do you say to that? Okay then. I wish I could grow a goddamn dick for a day and see if he’s right. See if everyone would just think we are shit, and prove that we are only ‘good for a girl band,’ but sadly we can’t. We just have to carry on, dickless and ever wondering how many doors my vagina is opening, hoping that maybe sometimes we just get opportunities on merit. But for gods sake, I just want every tosser out there who thinks this way to realise for every goddamn door my vagina has opened, it has closed ten others. The amount of bands who don’t want to tour with us because one time one of them tried it on and we weren’t keen, so they don’t wanna give us the time of day anymore. The amount of slimy promoters, draping arms around us and getting mad if we aren’t all for full torso on sweaty torso contact with a stranger twice our age. The number of instructions we get to ‘take a pretty picture’ when you know what? I am not fucking pretty. I am pretty fucking awkward. I got a pretty fucking big head and a pretty fucking big mouth and I take pretty fucking ugly pictures. That’s who I am and that’s who you get a photo of. How many times has someone stopped Thom Yorke and said, ‘Yo, can you look prettier in the next one?’

Finally, I wanna say that I am not on a mission. We are not primarily ‘gender warriors’. We are not first and foremost ‘spokeswomen’. We don’t want to become famous as an ‘LGBT act’. We might be all of those things, but above all else, we are musicians. And that’s what we want to put the focus on.

I, personally identify as female, and I can only write my lyrics and my vocal melodies from the perspective of what I know, and that is of experiencing the world through the eyes of someone identifying as female. However, I am purely speaking as the lyricist as Kit writes the majority of the instrumental parts, and Kit’s experience of gender is completely different to mine.

We endeavour to write music that tackles topics more universal than gender – death, love, grief, depression, addiction, recovery – we aren’t aiming to alienate any group with our music. We want to make cracking tracks that everyone can find something to relate to within them. I never want to focus too hard on writing about my experiences as a ‘woman’, just my experiences as a human. Unfortunately, we are not at a point where we can just sack off the fact our gender (or the gender of who we chose to go home with or to after a show) plays a part in the way we are perceived as musicians, no matter how absolutely preposterous the notion is. We just look forward to a day where we can all just be seen as people, as artists, whatever you want, just not our organs before all else.

‘Wish You Were Her’ EP by Screech Bats is out now.