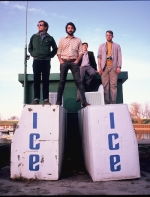 Michigan indie folk group Frontier Ruckus have announced a run of UK dates in support of their forthcoming album, ‘Eternity Of Dimming’ which is released on February 11th.