Having become a notable fixture as part of the UK festival season over the past seven years, Camden Rocks is now doubling down as it expands to two days. As always, the weekend will be showcasing an extensive list of established and emerging names from rock, metal, punk, indie and everything in between. With over 400 bands playing across 20 venues in the music hotbed of Camden Town, London, there is an overwhelming amount of acts to choose from.

Nevertheless, we’ve picked out 10 bands we think you should seek out this weekend. 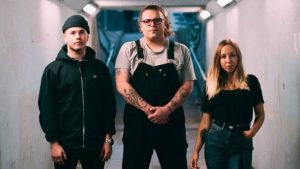 The past 18 months has seen a lot of change in the Milk Teeth camp. Nevertheless, now as a trio with Nervus’ Em Foster becoming a permanent member, they’re back on track having recently toured with PUP and played at last weekend’s Slam Dunk Festival.

Despite the new look line up completed by with vocalist/bassist Becky Blomfield and drummer Oli Holbrook, Milk Teeth are still very much the grunge punks we’ve come to love. Last November’s standalone single, ‘Stain’, was delivered with lyrical venom and an earworm of a chorus, reminding us of their growing melodic flair.

At Camden Rocks, fans will get the opportunity to see the three-piece twice in the space of just a few hours. So you really don’t have the excuse to miss them.

Manchester duo The Hyena Kill exemplify what Camden Rocks is all about; an underground band playing in intimate venues in front of people who thrive on seeing up-and-coming talent. The pairing of Steven Dobb and Lorna Blundell have been fairly quiet in recent months, working on new material that will follow last year’s superb EP, ‘SPUN’.

It perfectly captured their explosive brand of alt-rock with songs such as ‘Exit Mask’ and ‘Pound of Flesh’, highlighting The Hyena Kill‘s blend of sharp riffs and punchy percussion.

Their return to Camden Rocks could mark the beginning of a new chapter for this rising Manchester band.

Where & When: Saturday – The Lyttelton Arms – 7pm

Our Hollow, Our Home

It’s no surprise Our Hollow, Our Home have regularly been earmarked as ones to watch within UK metal. The South Coast quintet have already delivered two impressive albums in their young career. Last year’s ‘In Moment // In Memory’ merely enhanced their reputation, adding emotional depth to melodic metalcore spine. Their muscular riffs along with Connor Hallisey’s deep grows have been winning over fans and critics all over the UK and Europe. While shows alongside Underoath, Thrice, The Amity Affliction, In Hearts Wake and many others, is evidence that OHOH can own it on stage too.

While OHOH are musically brutal, songs such as ‘Speak of Sorrow’ and ‘Father & Ghost’ sees them deliver soaring, anthemic hooks that hit home the emotional heaviness they provide. By being thoroughly cathartic, OHOH has a tendency to unite a crowd.

Sandwiched in between Lotus Eater and Raging Speedhorn at The Underworld should give you a much needed Sunday afternoon wake up call.

Over the past 12 months, Delaire, The Liar have been building a following with their brand of emotionally wrought punk. The pairing of Ffin Colley and Joey Brayshaw specialise in exploring themes of loss, guilt, and being human. Last year’s debut EP, ‘Not Punk Enough’, perfectly captured this sentiment combining it with soaring melodies, driving rhythms and an effective narrative songwriting style.

On stage, Colley and Brayshaw are just as powerful and passionate. Their spot at Camden Rocks comes off the back of touring alongside Chapter & Verse, as well as their recent single – ‘One of Us is the Killer’.

Post-hardcore quintet wars have been around for a few years now with a varying degree of success. However, 2019 has seen the band from Rugby find themselves in a stable position. Kicking off the year with the release of ‘As Within /// So Without’, it highlighted wars‘ flair for providing pulsating riffs, towering choruses and powerful screams from Rob Vicars. Whereas their recent cover of Yungblud and Halsey’s ’11 Minutes’ put the spotlight on guitarist Sam Barnard’s ability to take the lead with his clean vocals.

Nevertheless, it is wars intense and heavy style that is sure to get the crowd riled up this Saturday.

Where & When: Saturday – Dublin Castle – 4pm 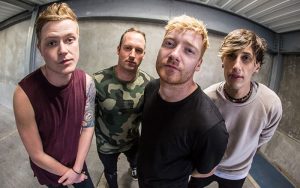 If you’re wanting an energetic lashing of pop-punk, then look no further than The Bottom Line. The quartet may be seen as relative newcomers yet over the past two years they’ve built an impressive live resumé having played shows alongside Simple Plan, The Offspring, and Waterparks. On top of that, they’ve played shows throughout the UK, Europe and America.

Now as they head to Camden Rocks, they’re preparing to release their second album. Set for release on 21st June, ‘No Vacation’ looks set to consist of big and bright hooks as TBL draw from influences such as All Time Low and Sum 41. Recent single, ‘In Your Memory’ is a fine example of what they’re all about and is certain to be a highlight at Camden Rocks.

Set to headline The Black Heart on Saturday night, Liverpudlian mob Loathe have been turning heads with their intense and cinematic style. With nu-metal and djent influences, it’s no surprise their sound twists and turns amongst a heavy, experimental musical cocktail. And although we’ve not heard any new music from them in over 18 months, they’ve certainly been active.

Having recently toured with Hollywood Undead and support slots with Employed To Serve and Palm Reader, their appearance at Camden Rocks is just one of many festival spots they have lined up this summer, along with European shows with Rolo Tomassi.

If you’ve yet to experience Loathe‘s powerful take on metalcore, then be prepared for a chaotic and unrelenting set. 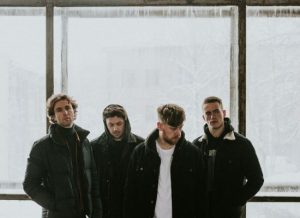 Portsmouth’s Acres specialise in providing powerful, emotionally-charged post-hardcore. Since their emergence in 2015, the quintet have been fine-tuning their sound through two EPs and various tours. While 2017’s ‘In Sickness & Health’ presented the band in a heavier fashion, they’ve since become a refined, sonically impressive band.

While the tagline of “sad songs for sad dudes” isn’t just a marketing ploy as their upcoming debut album, ‘Lonely World’, looks set to revolve around the notion of honesty through events they’ve experienced. As recent singles ‘Talking In Your Sleep’ and ‘Lonely World’ have demonstrated, vocalist Ben Lumber has an ability to tell relatable stories while guitarists Theo Sandberg and Alex Freeman and drummer Konnor Bracher-Walsh deliver a striking music backbone.

With the album due later in the summer, Camden Rocks serves up as the perfect introduction to Acres.

London metallers TheCityIsOurs look set to bring a whole load of gigantic riffs and life-affirming choruses to Camden Rocks this weekend. Formed in 2015, the quintet have gone from strength to strength with a growing live reputation following shows alongside The Word Alive, Our Hollow, Our Home, Loathe, Betraying the Martyrs, Malevolence and Napoleon.

Now as they prepare to unleash their debut album, ‘LOW’, this summer, TheCityIsOurs look set to keep their momentum going this weekend. While they’re known for their high energy, no holds barred live show, they do have an emotional core with ‘LOW’ set to draw from the band’s own introspective look at mental health and self-betterment. Nevertheless, TheCityIsOurs are an exciting prospect and are one to get on board with at Camden Rocks.

Touted as “ones to watch” by many outlets (including us), The Dunts will be bringing their self-styled brand of ‘council-punk’ to Camden Rocks. Influenced by life living on forgotten council estates in Glasgow, the quartet combine bouncy indie melodies with a ferocious punk attitude making for a compelling sound.

Recent single ‘Bad Decisions’ along with ‘G53’, ‘Ride The Wave’ and ‘Witch Hunt’ are sure to stir up the crowd in the intimate setting of the Dr. Martens ‘Boot Room’ on Saturday afternoon. If there was ever a time to get to know who The Dunts are, Camden Rocks is the perfect opportunity.

If that lot isn’t enough for you, perhaps go and see some of the following: 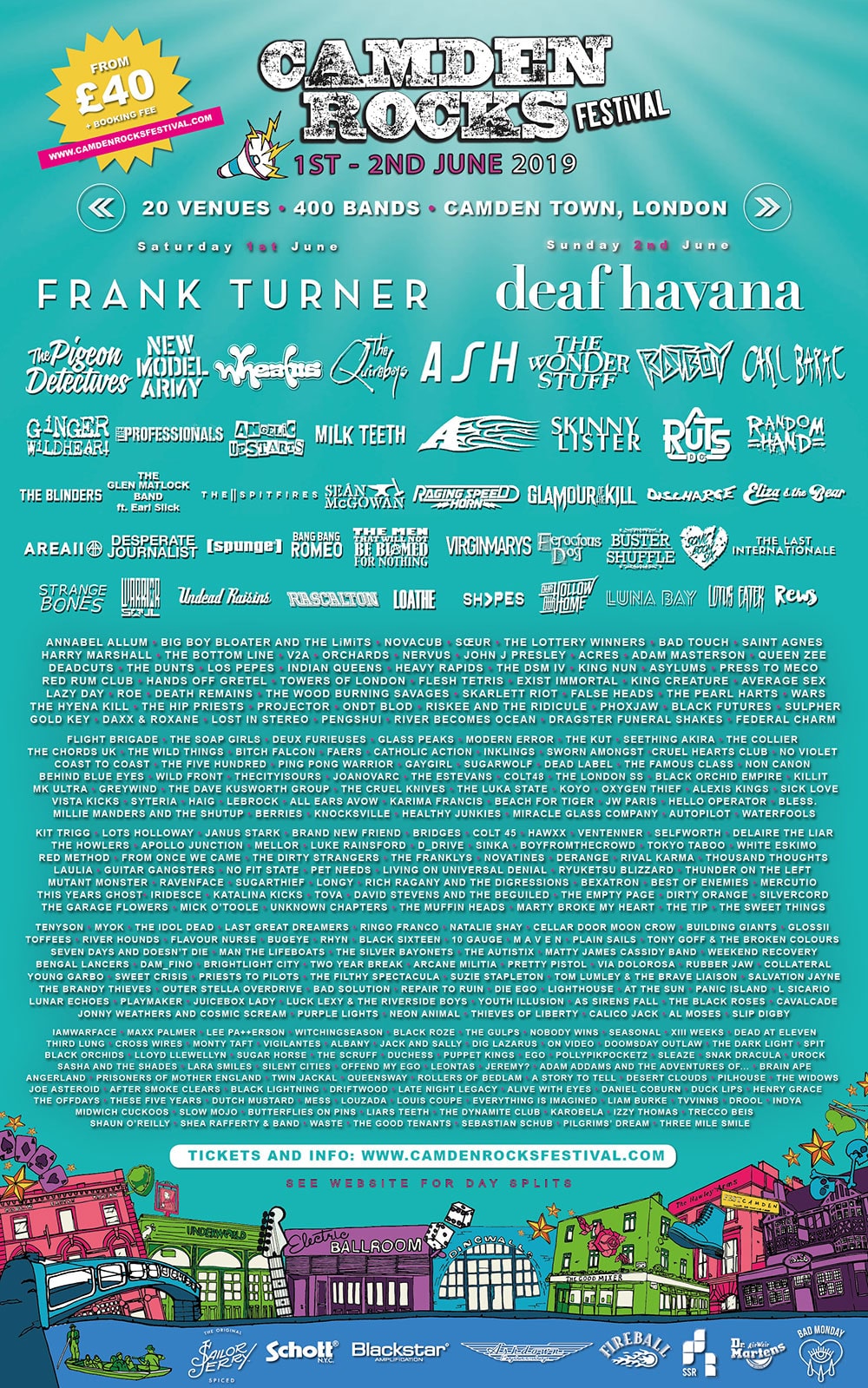