Feature: Why We Do This – Jonah Matranga 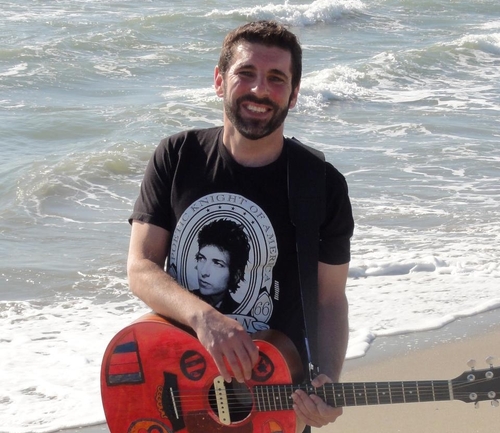 In a series of 4 weekly features, we’ve challenged some of our favourite creative artists to think about exactly why they pour countless hours of their time into the music scene that they have associated themselves with and just what it means to them. Why do they do the things they do, in the way they do them? You’ll see that whilst it has its highs, it’s certainly not all rosy and comes with its issues too but despite this, the people involved still keep ploughing on with the upmost optimism.

In this second feature, we caught up with singer songwriter Jonah Matranga get his thoughts on the current state of the music industry and how he sees things.

Already Heard: How do you view the changes in attitudes towards physical music over time?
Jonah Matranga: It’s kinda like weather; there’s not much reason to whine about it. Just wear appropriate clothing.

AH: Do you feel like the change in attitudes has been a gradual one or has there been a moment which has made you evaluate everything and made things more apparent?
Jonah: I remember being in the UK years ago, staying with people and seeing mountains of CDRs. Mostly, it’s just been seeing my daughter have nothing to do with CDs. She streams and trades ipods with people and it’s just a totally different relationship with music than me. She loves it lots, just has no desire to hold it in her hands.

AH: Have you had to adapt your own views accordingly? Many others have had an early reluctance followed by eventual acceptance that this is the way things are going.
Jonah: I think it’s all about value and fair exchange. I’m doing my best to keep my mind open and curious. Honestly, the slow switch to streaming is a bummer for me, I really don’t like it as a listener or a listenee.

AH: You’ve recently put your back catalogue up online for a reasonable fee. Is it important to retain the value behind the music, spread the world as far as possible or a balance between the two?
Jonah: Mostly, I just want my music available to all in fair and fun ways. I’ll keep working towards that and really thinking about what I think it’s worth, as opposed to what ‘the market’ thinks it’s worth.

AH: Has music almost become throwaway to an extent? In a way, the music people are holding onto has more of an impact with the listener purely by the fact that it’s kept their interest so the bar has been raised which is a good thing, surely?
Jonah: I just think there’s only so many hours in the day, so I’d rather choose stuff I really love (whether it’s new or old) rather than just have crap streaming into my ears all the time.

AH: The past few years have seen many DIY labels look to more innovative methods to releasing music to put the value back into the physical forms. From download codes with frisbees to t-shirt and record bundles, it’s all been done. Having self released the majority, possibly all, of your own material is this something you’ve considered before?
Jonah: Sure, I love messing with all that stuff. My favourite is the Kickstarter-y stuff. We’ve made some cool stuff that way and I’m looking forward to more.

AH: With music so easily accessible, it feels like the prominence of legitimate bands with any credible ethics is dwindling or perhaps becoming lost in the sea of those seemingly in it to try and make a quick buck. Does this make you even more determined to try and put the world to rights through doing things in a respectable manner?
Jonah: It actually does. I’ve seen this erosion of artists caring how their music gets out there for a while. Bon Iver is doing all sorts of advertising for some whiskey. What the fuck is that? I don’t wanna pick on them, but seriously. So yeah, I just want it to stay fun and personal with whatever I make. I’m not trying to be punk rock or anything, I just really want it to stay sweet. It sounds so simple, and that’s how I like it.

AH: Having toured relentlessly in the past, where do you see the live show in the whole equation? Has touring become even more important for a solo artist in recent years?
Jonah: I really try not to pay attention to what might be good for profit. I’m so grateful that I make a little living doing this, but the minute I start playing more ‘cause I need the money – fuck that. So, I just play when I want to, release stuff, keep in touch, see what works.